Russia’s S-400 is an advanced long-range surface-to-air missile defence system, procurement of which was signed by India in October 2018. Reports suggest that US sanctions were imposed on China and Turkey for their procurement of S-400 as well. Similar apprehensions prevail as India is now in the process of inducting its defence systems.

According to sources, the Biden administration is unlikely to penalize India for purchasing Russian S-400 air defence systems under its Countering America's Adversaries Through Sanctions Act (CAATSA). While the US has not yet made its position on the S-400 contract public, the Biden administration has told New Delhi during diplomatic talks that it is ready to offer India a presidential waiver just for the S-400 purchase as a one-time exemption, according to the source.

India's Stance: Meanwhile, New Delhi highlighted in a statement on Friday that the purchase of defence equipment is a sovereign decision made keeping the country’s security in mind. India claims to face a spectrum of security challenges which validates its goal of keeping the armed forces in a state of readiness. In response to a question in the Lok Sabha, Minister of State for Defence Ajay Bhatt stated that the government is aware of any events that may affect defence equipment purchase.

Assurances by the US: During the previous Donald Trump administration, India persuaded the US that it would proceed with the S-400 agreement with Moscow, as reported by The Print. When the then-Defence Minister Nirmala Sitharaman met with her American colleague Jim Mattis in September 2018, diplomatic sources indicated that New Delhi was "assured" of a waiver.

India as a strategic ally to the US: The recent trends in US-India strategic involvement seemingly foster the idea that this purchase may not jeopardize their relations. According to sources, India's defence acquisition has extended, with a large number of American systems in service and more on the way. The United States is interested in a $3 billion deal for armed drones and new aircraft for the Indian Air Force and Navy.

According to sources, some legislation is being prepared to exempt Quad partners from CAATSA sanctions, according to a former Indian Ambassador to Russia. Most importantly, the United States National Defence Authorization Act of 2019 gives President Biden the authority to waive sanctions for strategic and national security grounds. 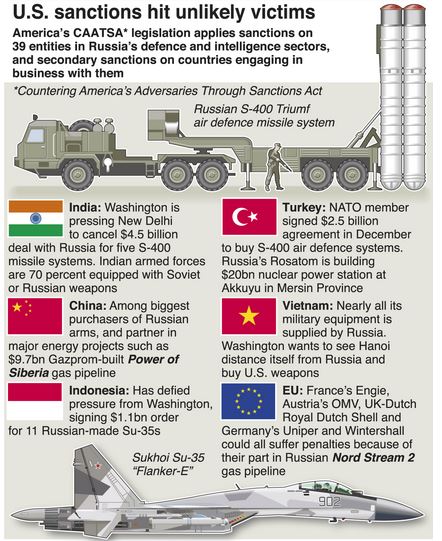 CAATSA: The Countering America's Adversaries Through Sanctions Act (CAATSA) is a United States federal law that imposes sanctions on Iran, Russia, and North Korea. This measure prohibits US trade partners from engaging in bilateral agreements with these three countries. The United States believes that any defence purchase from these countries might jeopardize the country's security. The bill was passed on July 27, 2017. Russia's invasion of Crimea in 2014 spurred the CAATSA, as did allegations of meddling in US elections in 2016.

Despite the dangers, India appears to place a high priority on national security. It is expected that the issue will be resolved through tactical and diplomatic communication.