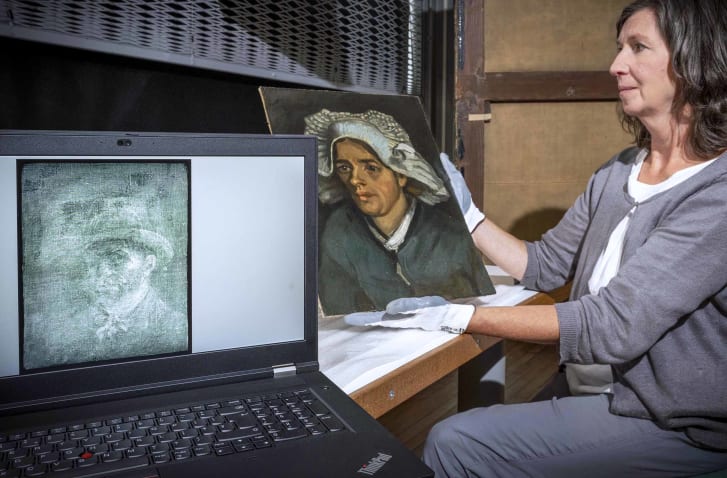 A previously unknown self-portrait of Vincent Van Gogh was recently discovered underneath another one of his paintings, Head of a Peasant Woman. The self-portrait was found via X-ray when the National Galleries of Scotland was prepping for an upcoming exhibition on impressionism.

The museum describes the self-portrait as "a bearded sitter in a brimmed hat with a neckerchief loosely tied at the throat. He fixes the viewer with an intense stare, the right side of his face in shadow and his left ear clearly visible."

According to the National Galleries of Scotland, the portrait in question is on the back of the canvas of Head of a Peasant Woman and is covered by layers of glue and cardboard. The museum’s experts believe the glue and cardboard were applied around 1905 when the painting was lent to an exhibition at the Stedelijk Museum in Amsterdam.

It is a well-known fact that Van Gogh was not successful during his lifetime and was not financially well-off. In order to save money, Van Gogh would often reuse canvases. The artist would turn the canvas over and work on the reverse side, which is what happened with this self-portrait and Head of a Peasant Woman.

Whether the hidden self-portrait can be uncovered remains to be seen. The process of removing the glue and cardboard would require delicate conservation work and experts have yet to confirm if it would be possible to remove them without damaging Head of a Peasant Woman.

Although this discovery is exciting, it is not the first time a hidden painting has been discovered underneath another Van Gogh painting, or even a self-portrait. There are five such examples in the Van Gogh Museum, Amsterdam. Additionally, there are others in the Met in New York, the Wadsworth Atheneum Museum of Art in Hartford, Connecticut and in the Kunstmuseum Den Haag in The Hague, Netherlands.

The X-ray image of this newly discovered painting will be open to the public through a specially crafted lightbox when it will be featured at the "A Taste for Impressionism" exhibition between July 30 and November 13 at the Royal Scottish Academy, in Edinburgh.