Vanishing Without A Trace: Phillips and Pereira May be Victims Of Foul Play 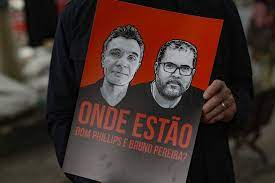 On 5 June, Dom Phillips and Bruno Pereira went missing after taking off for a trip to the Javari Valley, in the far western part of Amazonas state.

The area where the two men vanished has been known for the presence of illegal miners, loggers, and international narcotics traffickers. The Brazilian authorities referred to the destination as dangerous.

Suspecting foul play, the Amazonas state security forces made one arrest and interrogated five others last week, after finding blood in a boat owned by the suspect in the victims’ disappearance.

For the love of the Amazon

Phillips intended to make a few more trips to the Amazon before adding the last touches to his book that would tackle the development issues related to the world’s largest rainforest. Little did Phillips know that this expedition would be his most dangerous adventure as no one saw him or his friend Pereira, the Indigenous specialist, alive again.

Phillips and Pereira were last spotted at the beginning of June, going up the Itaqua River in the western Amazon by boat. However, they never made it to their intended destination.

Phillips, a 57-year-old journalist from UK’s Merseyside and Pereira, 41 (a tour guide from Brazil's northeast) bonded over their mutual love for the Amazon and its intricacies. They wandered across the area for two years together as Pereira accompanied his journalist friend in his endeavor to write a book about rainforest sustainable development.

The two friends shared memorable moments while attempting to discover the Amazon rich bushes out of a deep sense of fascination and respect for untouched nature.  Phillips, a former style columnist for The Independent and one-time editor of the music magazine Mixmag fell in love with the Amazon when he first visited Brazil in 2007 and since managed to become a well-known foreign correspondent in the country.

The British journalist had a special interest in studying sustainable strategies to develop the Amazonian environment, while shedding light on harmful projects in the area that contributed to impoverishing the locals. He is also a prolific writer about the threats faced by the region, including illegal gold mining activities in Indigenous lands.

Phillips met Pereira during a 2018 expedition to the region, as the latter worked for Funai, the Brazilian government’s Indigenous foundation. The two adventurers traveled 950km by boat at the time.

Traces of a wicked scenario

Brazilian President, Jair Bolsonaro, said on 13 June that he believes “something wicked” was done to the correspondent and his friend, at a time when the Brazilian embassy in London informed Phillips’ family that two unidentified bodies had been found during the search operation. Later, the federal police debunked the news.

Bolsonaro said during an interview with Brazilian radio that “evidence gathered by investigators suggested the two men were unlikely to be found alive.”

On the other hand, Brazilian Indigenous activists, who denied having any information about the discovery, said there are high chances that the two men’s bodies will soon be recovered in the vast forest near the area where the devoted search teams found scattered belongings and biological traces on Saturday.

Following the statements released by the Brazilian leader, hundreds of Indigenous people wearing traditional garments rocked the streets of Atalaia do Norte, the riverside town from which Phillips and Pereira started their reporting trip on June 2nd.

The protesters sang in their native language to claim justice for the victims and condemn the ravaging abuse of Amazonian lands, while emphasizing Bolsonaro’s incompetence, who, according to angry demonstrators, must leave office.