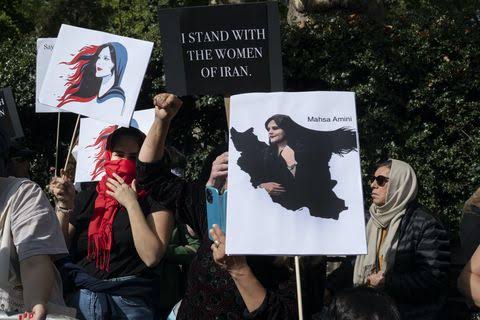 In Iran, it seems, Justice is nowhere to be seen! Unfortunately, the light at the end of the tunnel has been replaced with bullets, blood, and beating. It looks like the fight for the youth of Iran may never end!

Iran has been experiencing deadly unrest for almost a week now. It all started when Mahsa Amini, 22, passed out in police custody after being detained for wearing an "improper" hijab, a headgear that women are required to wear by the law.

Mahsa Amini's family acted quickly, contacting family members, acquaintances, and contact- anybody who could assist - after she was arrested in the Iranian capital for donning her veil too loosely.

Family members attempted but were unable to visit her when she was being held during those crucial hours, ultimately left in shambles due to her untimely death. It caused an uproar, which has now spread all over the world.

As per medical records, the young woman from the Iranian province of Kurdistan was violently struck in the head many times before going into a coma. Iran's officials, meanwhile, assert that she "suffered a sudden heart attack." It is considered a flagrant untruth, insulting, and evidence of a weak political system.

A popular trend on social media sites depicts young women dressing modestly yet leaving a piece of their heads exposed. Precisely like Mahsa Amini did on the day, she was detained and reportedly murdered.

The rest of the world, where wearing t-shirts, shorts, or skirts is ordinary, can't fathom the unnecessary rigidity of Iranian legislation or the existence of morality police in this time and age. Instead, they attempt to convey Iran's discrimination, idiocy, and oppression.

Not an isolated incident in Iran, currently amid raging protests, another innocent life of an Iranian woman has been lost. According to reports, a video of Hadis Najafi, a young Iranian woman, went viral who fearlessly walked into the heart of a protest while tying her uncut hair back. Unfortunately, she was shot and killed. She reportedly had gunshot wounds to her belly, neck, heart, and hand.

However, it is mandated by the Iranian law that women wear the hijab as of 1979's Islamic Revolution. Mass protests broke out when the regulation was enacted in 1981 and haveperiodically occurred. Since the protests started last week in Iran, 35 people have died.

In a country too stubborn regarding traditions, prioritizing artificial customs over women's existence is appalling. But unfortunately, Iran focuses on oppression rather than building its country by enacting laws or policies that enable the youth to develop intellectually and academically.