Vyommitra Gets an Update, can Now Read and Talk 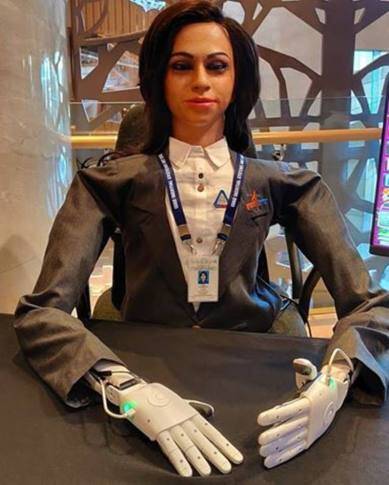 ‘Vyommitra’, the humanoid developed by the Indian Space Research Organisation (ISRO) is to fly on unmanned test missions ahead of the Gaganyaan human space flight mission. It is currently undergoing pre-flight ground tests at the ISRO Inertial Systems Unit (IISU).

IISU, who was also accountable for the design, development, and integration of the robot has now victoriously integrated it with a computer “brain”. With this latest addition, the humanoid will now be enabled to “read” control panels aboard the unmanned test flights. Also, this new feature will aid in communicating with the ISRO ground stations, IISU Director Sam Dayala Dev told the media.

Earlier, ISRO and IISU were in the news when Vyommitra was first unveiled - the ‘female’ robot astronaut - in 2020.

Vyommitra is a female-looking space robot astronaut built by ISRO for a special mission. This special mission name is the Gaganyaan mission which is likely to be launched by the start of 2024.

She is half-humanoid with a face, shoulder, and two limbs, however, she doesn't possess lower limbs. ISRO is credited for its creation, however, its sister ISRO centre Vikram Sarabhai Space Centre (VSCC) at Thumba designed and developed its fingers. It is made with AI technology and designed for overcoming shocks and vibrations during the flight, the IISU director asserted.

Designed in a manner that it resembles a human and also has sight and speech capabilities, he added. ‘It has a certain level of intelligence. What we intend is that it should operate and read the display panels and communicate back to us using its own voice,’ he said.Vyommitra will be sent to space after the first unmanned mission in space ahead of Gaganyaan human-flight Mission in 2024.

Also, a digital twin is expected of Vyommitra, which will be developed in collaboration with academic institutions like the IITs.

Rise In Child Labour During Pandemic