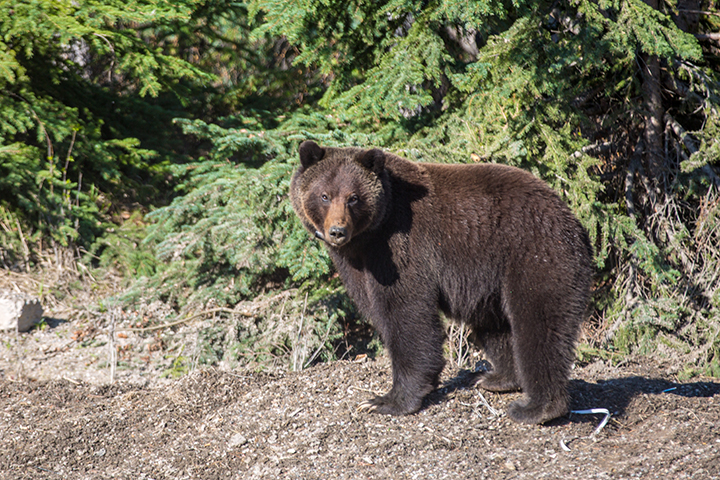 Parks Canada is the agency of the Canadian Government that is responsible for managing the national parks, sites, landmarks, historic sites, and marine conservation areas of the country.

A lot of black bears have been drawn into Jasper, an alpine town in Alberta province by fruit trees that are non-native. Crops like apples and chokeberries are proving to be a demand amongst these bears that are all getting set on their hibernation mode as the winter slowly is setting in.

The residents living in the Rocky Mountain town have been advised to take out fruits and trees bearing fruits from their property to keep these bears away from backyards and open parks. It is a safety risk to see bears openly feasting on fruits.

These bears, once they start living in the residential area, would easily gain access to urban garbage and food. A family of bears were caught gnawing and nibbling on food and were trapped and relocated to a remote area along the Icefields parkway on the 9th of September. It consisted of a mother and two cubs who were later seen enjoying some buffalo berries.

Apart from this case in another instance, there were seven other black bears seen in Jasper town. Wildlife conflict specialists are trying their best to keep away the bears with the help of noise makers and non-lethal ammunition like paintballs, but nothing seems to be working in favor, said  Parks Canada. Once these bears get fond of fruits, it’s impossible to drive them away.

An effort to relocate them just outside the town was also in vain as they safely made their way back into the town and were seen feasting. Though some of them have been caught, keeping animals trapped is risky for their life. The ones relocated from Jasper town to a new habitat unfamiliar is risky with other bears that already have been living there. Change is always difficult at the beginning for every living being.

All the food sources must be removed at the earliest else, these cubs will not take long to learn about good quality food readily available for consumption in this town educated by their mothers. This can only worsen the situation further for the residents. Parks Canada has further issued a warning to root out the non-native berry crops which have become a problematic crop as the Municipality planted around 20 non-native fruit trees in the available greenspaces and local parks last month.

Free assistance to chop off the trees is being offered by Parks Canada. It is highly risky to see the bears roaming freely around in broad daylight. It’s high time the right action is taken before something even worse happens. The task of the hour is for the locals to agree with Parks Canada and get rid of the fruit trees at the earliest. It’s always better to take precautions than act smart after the damage has happened.