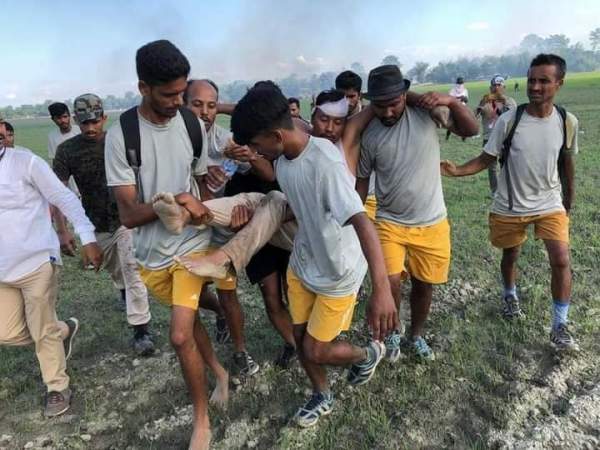 The Assam Govt plans to reclaim 25,595 acres of land to train unemployed youth from indigenous communities in agricultural practices under the project titled Gorukhuti. However, the vast majority of those targeted have been Bengali Muslims and Bangladeshi migrants.

Back to the eviction,

The number of eviction drives has only been going up since the BJP govt won the state back in 2016. The first eviction drive was peaceful since the locals were informed about the eviction and were able to dismantle their houses. Most of them were so poor they could not afford to buy tin sheets. Nearly 800 households were evicted.

The second eviction drive, went viral after district-appointed photographer Bijoy Bania was caught kicking a dead body after it was beaten by the police. This incident occurred when the police decided to conduct the second eviction drive giving extremely short notice to the residents. Most of the residents have said that they got the eviction warning on late Wednesday evening. The notice was for Thursday at 6 am.

The locals arranged a peaceful protest. They wanted to know rehabilitation plans arranged for them. Once they found out, they realized it was arranged near flood-prone areas, which they immediately resisted. Some agitated locals pelted stones at the police. This then led the police to retaliate with rubber pellets and tear gas. Once that didn't work out. The police opened fire killing two people.

Many residents claim more have been killed, however, they don’t know for sure since the police have cordoned off their village. Superintendent of police Sarma says they did what they had to do in “self-defence.” Another unnamed police officer said, “We feel some outside elements have got involved.” However many reports have cited that it was pre-planned.

The All Assam Minority Students Union (AAMSU) has called for an investigation. The investigation will probe into the indiscriminate killings by the state police by calling a retired seated judge of the Gauhati high court. This investigation would be conducted under the watchful eye of its chief justice. This is a precautious step taken since the retired judge might have political affiliation with the Assam Government. The court has also taken action on Bijoy Bania, the district-appointed photographer to be in state custody for 2 weeks.