Who is Lula da Silva? 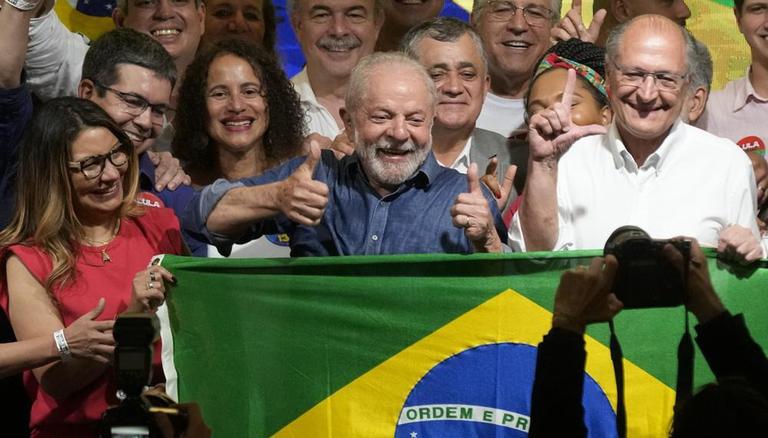 The 39th President of Brazil, Luis Inacio Lula da Silva, better known as Lula, won the election on Sunday. In a runoff vote, Socialist Worker's Party candidate Luis Inacio Lula da Silva defeated incumbent President Jair Bolsonaro to become the nation's new leader. According to the Brazilian Supreme Electoral Court, in a tightly contested election, Lula received 50.9 per cent of the vote over incumbent far-right President Jair Bolsonaro's 49.1 per cent. After ending the first two terms, which lasted from 2003 to 2010, the socialist democrat Lula is expected to be elected president of Brazil for the third time.

Here is all you need to know about da Silva, whereas ex-military man Bolsonaro has developed a reputation for his loud remarks, far-right ideology, and anti-science and anti-environment policies, Lula’s reign has and will consist of different markers.

Lula was born in Caetés, Pernambuco, Brazil, in 1945. He went on to become one of the most well-liked politicians there and set the country's policies for ten years.

Luiz Inacio da Silva, better known as Lula in his own country, served in that position from 2003 to 2010. Lula is a former union leader turned politician who was a founding member of the Brazilian Workers' Party (PT). However, in a corruption scandal that rocked the country just 18 months ago, the bearded Marxist hero with the distinctive raspy voice was a political outcast who was imprisoned.

To win over younger voters, Lula ran a gruelling campaign that saw him travel the nation and make appearances on well-known podcasts. "We need to rebuild this country... so the Brazilian people can smile again," Lula stated. Throughout a protracted and divisive election campaign, the charismatic Lula held a tiny advantage. Bolsonaro, though, was nipping at his heels right up to the end as the election came down to the wire.

Luiz Inácio da Silva, to assist the family's income in his early days, worked as a shoe shine boy, street seller, and factory worker. He obtained work with the Villares Metalworks during the depression that followed Brazil's 1964 military takeover. He joined the Metalworkers' Union in 1972 and rose to the position of union president. He was arrested and charged with violating national Security Law as a result of his campaign for pay raises.

From 1978 through 1980, a string of strikes highlighted the campaign, which resulted in Lula's arrest and indictment for breaking the National Security Law. He was found guilty and given a three-and-a-half-year prison term, but the Military Supreme Court released him the following year.

As a founder of the Workers' Party (Partido dos Trabalhadores), Lula ran for office for the first time in 1982, running as his party's candidate for governor of the state of So Paulo. He placed fourth overall. Later, he organised massive rallies in state capitals in 1983 and 1984 to support direct presidential elections on a national level. Due to his popularity and charm, Lula was elected in 1986 to the national Chamber of Deputies as a federal representative for So Paulo. In 1989, Lula, a presidential candidate for the Workers' Party, was defeated by Fernando Collor de Mello.

Lula proceeded to run for president on his party's behalf in the elections of 1994 and 1998, coming in second place to Fernando Henrique Cardoso both times. He changed his programme for the presidential election of 2002 to one that was more realistic; he promised to collaborate with the International Monetary Fund to fulfil economic goals while remaining committed to promoting grassroots political involvement. With 61.5 per cent of the vote, Lula easily defeated José Serra, the government-backed candidate.

Despite being well-liked, Lula unsuccessfully ran for the presidency three times before being chosen for the first time in 2003. His bold social welfare initiatives, such as Bolsa Familia and Fome Zero, sought to end hunger and poverty in Brazil while also advancing the working class.

Lula's involvement in issues like the Iran Nuclear Deal and climate change allowed Brazil to assume a greater position on the international stage.

Corruption scandals and his career

As a blue-collar hero who oversaw an economic boom driven by commodities that enabled 30 million people to escape poverty, Lula departed office in 2010.

Although there were concerns that Lula's brand of leftism would be too extreme at the time, his 2003–2010 administration combined ground-breaking social programmes with pro-market economic policy. He developed a track record as a reasonable and practical leader.

However, he later found himself embroiled in a significant corruption scandal centred on the state-run oil corporation Petrobras, which also involved some of the most powerful corporate leaders, legislators, and members of the PT in Brazil. Lula has consistently refuted claims that he accepted payments in exchange for providing access to lucrative Petrobras contracts, scandals involving corruption blighted Lula's leadership and ultimately brought him to heel. As a result, Lula was sentenced to nine and a half years in prison after being found guilty in 2017 of money laundering and corruption. The trial's judge later rose to the position of Minister of Justice and Public Security under Bolsonaro. While on appeal, Lula attempted to run for office in the 2018 elections but was prevented from doing so by Brazilian law. Lula served more than a year in prison.

Due to the biased judge who presided over the initial trial, the Brazilian Supreme Court overturned and nullified the verdicts against Lula in 2021, giving him a free pass.Currently, Lula has less than a month to persuade more people to support him at a time when Brazilian politics has grown more polarising and contentious.

However, He was not vindicated. The magnitude of the corruption scandal has left many Brazilians terrified. Others voted for him solely to get rid of Bolsonaro, while many others remember the economic success that existed under his administration with nostalgia.

Challenges ahead for Lula

His administration will face difficult challenges. Compared to when Lula was the last president, the government's coffers are less full.He takes over at a time when there are intense political and social tensions in Brazil, and there are worries about the rising rates of poverty in an economy that hasn't yet recovered from the pandemic's effects. Brazil is facing pressure from other countries to undo Bolsonaro's policies that contributed to the destruction of the Amazon rainforest and to uphold the rights of the LGBTQ community and other minorities that the president repeatedly disparaged.

Large hikes in the minimum wage, which Lula seemed to support during the election, will probably drive up inflation, which is now hovering around 7%. Productivity is still at a standstill, and industry, which has lost ground relative to the rest of the economy, is more uncompetitive on the global stage.

But politics will likely be Lula's toughest obstacle. Although Bolsonaro may not have won the presidency, several of his allies have been elected to prominent political offices across the nation.

In the Senate, where Bolsonaro's Liberal Party (PL) holds the largest bloc of members, five of his former ministers were elected. In the lower house of the national Congress, where the PL is also the largest party, three of Bolsonaro's former cabinet colleagues succeeded in winning seats.

The Amazon and climate leadership

The Lula da Silva administration will be closely watched by environmentalists as it comes into power over both the Brazilian nation and the largest forest reserves on the planet. Throughout his campaign, Lula da Silva made it clear that he would try to halt deforestation, which has reached record levels under Bolsonaro's direction. Citing the possible advantages of biodiversity for the cosmetics and pharmaceutical industries, he has claimed that protecting the forest might lead to some financial reward.

Before the UN-led Conference of Parties in November 2022, Alonzo Mercadante, the head of Lula da Silva's government plan, asserts that another tactic will be to build a coalition with Brazil, Indonesia, and Congo.

The group would try to put pressure on more affluent countries to contribute money for forest preservation and to develop a plan for the global carbon market.

According to several analysts who spoke with CNN, his stance on the environment and the climate change issue might relaunch Brazil's diplomatic efforts.

Should Canada’s Liberal Party be Worried?