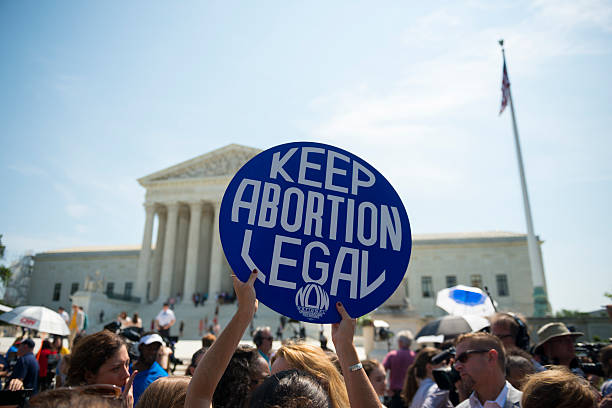 Abortion has always been a divisive issue in the US between states, but ever since the leaked draft opinion of Justice Samuel Alito, America has been in an uproar, and here is why.

Although the leaked opinion is only a draft, this majority opinion held by the Supreme Court is in favour of overturning current legislation that protects a woman’s right to abortion. Politico has access to the leaked document that can now be widely read.

The Supreme Court consists of justices, the majority of whom were appointed by a Republican President, who may also have heavy political leanings that align with their respective appointees. This means that out of 9 justices who are on the Supreme Court, only 3 were appointed by a Democratic president. Of course, the political leanings of the justice and the president do not always align - but are 6 Republican-appointed justices reflective of the American public?

Pro-choice protesters could be seen rallying outside the Supreme Court building in outrage as news of the leaked draft spread. Crowds of women demonstrated their anger and fear at the possibility of abortion bans and restrictions becoming a reality in the near future.

The current legalisation of abortion in America, based on the ‘Roe vs Wade’ case of 1973, is under threat of being severely restricted or even banned in some states that are already hostile to abortions taking place. Such states include Texas, Arkansas, Alabama, Mississippi, Missouri, and Oklahoma, where abortion is almost legal. So, what is ‘Roe vs Wade?’

The ‘Roe vs Wade’ case in 1973 was a historical landmark for women’s reproductive rights. Before this case, abortion was dependent upon state held opinion and abortion was not de-criminalised as constitutional law. This is now the case and abortion is technically legal in almost every US state - but this does not mean abortion is supported in all fifty states.

‘Jane Roe’, a protective pseudonym for Norma McCorvey, was represented by Sarah Weddington in a case in which ms Roe sought an abortion for her unwanted pregnancy. Weddington argued against the state of Texas, which now prohibits abortion as early as 6 weeks - once the fetus’s heartbeat can be detected.

Roe argued that the right to terminate a pregnancy was a constitutional right to privacy and should be without government interference. The case was met with outstanding approval from women’s organisations, feminists, and pro-choice activists of the 70’s.

Roe successfully won the case, 7 to 9, against Henry Wade. ‘Roe’ and women across America had finally secured bodily autonomy and the right to abortion. A pregnant woman’s life no longer had to be in danger to warrant an abortion. So, what would happen if abortion laws were decided at the state level and not protected under federal legislation?

Many states have ‘trigger laws’ which would immediately become effective if ‘Roe vs Wade’ is overturned. This means certain states that are already hostile or want to put further restrictions on access to abortions would legally be able to. Some ‘trigger laws’ will strive to ensure that receiving an abortion is near impossible or illegal. Abortion could become a fineable or jailable offence, unless the mother would otherwise not survive childbirth, or in cases such as rape or incest.

Many states will also continue to be pro-abortion but will fall under pressure from the increased number of people who are seeking care in pro-choice states. New York, California, Connecticut, Hawaii, and Illinois, for example. Funding cuts or, worse yet, no funding, would mean that abortions could become very expensive and unaffordable for many people.

Bans on abortions would not stop abortions from taking place, but instead increase the number of unsafe abortions that are attempted. Subsequent fatalities of those who are pregnant would increase due to complications.

Many young women and people who become pregnant at an early age would also be unable to complete their education. Statistics of those who otherwise graduate high school would unfortunately decrease.