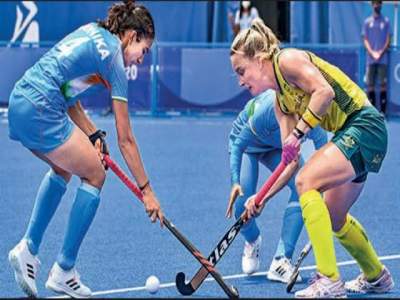 Madhya Pradesh: The 2021 Olympics is going on in Tokyo Japan and athletes from our nation are winning billions of hearts with their performance. And Women’s team are showing exemplary fighting spirit in the Olympics. India has scripted history after it got entered the semi-finals of the Olympics after 41 years and it's nothing less than a victory for our nation. After beating the Australian team in Olympics, the Indian women’s hockey team enter the semi-finals on Monday. While the nation is celebrating this huge success of our country, citizens of Madhya Pradesh are feeling proud as five brilliant players in the hockey team are trained in Bhopal and Gwalior city.

We all know that success does not come overnight, it is achieved by facing hardships, sacrifices, dedication, and patience and these players are an example. Vandana Kataria, a player of the women’s hockey team lost her father during this period but she couldn’t go home as she was busy with her training in Bengaluru. And on the other side, Sushila Chanu is financially not so good and that’s the reason her family did not go to their home for two years so that they can save the money for other daily uses. As like them, there are many players who struggle a lot to reach greater heights by not giving up and that’s a spirit.

On the other hand, in the men’s team , Vivek Sagar a resident of Itarsi helped India to get into the next round after he scored a goal in the dying moments against the team of Argentia. While Nilakantha Sharma played an important role in taking the ball to the goalmouth. And it is good to know that both the players were trained at the Madhya Pradesh hockey academy team. These stories are setting an example not only to the youth of Madhya Pradesh and also aspiring players around the nation.

After this iconic success of Madhya Pradesh women at Tokyo Olympics, Mr. Paramjeet Singh, head coach of MP women hockey academy said, “Madhya Pradesh academics have become the training centers for the players of both Madhya Pradesh and other states. It is a huge day to celebrate as all these players are associated with the academics or they had represented MP in national tournaments and I am so proud of my team”.

Age is just a number! Meet Pappammal the Legendary Organic Farmer who just bagged Padmashri at the age of 105