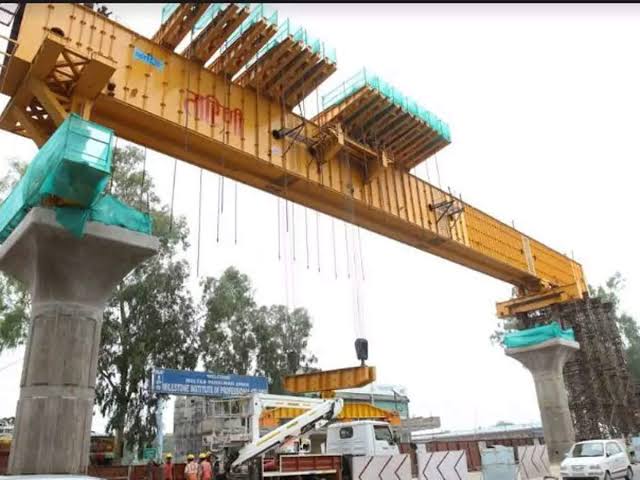 MEERUT(UP): The construction work for Delhi-Meerut Rapid Rail has picked up and the construction of stations is also taking shape, the work for the second phase of the Partapur station in Meerut has already started. NCRTC (National Capital Region Transport Corporation) is in full action to complete its target of the Rapid Rail Corridor by the year 2025. The goal of NCRTC is to operationalise 17 km of the stretch from a total of 82.15 km by March 2023 and the rest by 2025. Delhi-Meerut road is one of the busiest roads in UP, so Rapid Rail from here can prove to be a boon for people in terms of traffic and rush. Now, the local metro services will also be available to the passengers. The upper part (concourse level) of phase second Partapur station is under construction. For this, precast beams are being put up. The Partapur metro station is Seven meters high from the ground,75 meters long and 34 meters wide. At the same time, 48 precast concrete beams are being used for the concourse level. Each beam is about 10 meters in length. For the construction of the station, four pillars have been constructed in the middle of the road and on both sides. They are parallel to each other. The four pillars of each part are joined together by precast beams. Each beam weighs approx.40 tons. It is a difficult task to install precast beams on both sides of the road due to their large size and heavyweight. However, maximum precast segments are being used to build more in less time. The precast segments are manufactured by RRTS (Regional Rapid Transit System) Casting yard in Shatabdi Nagar from where they are being brought to the site and with the help of high competence cranes to get fixed at the allocated location with the help of trucks.

NCRTC is taking care that the construction won't create a hassle for the local people. Considering the comfort and convenience of people, there will be gates at each side of the road, from where the passengers will reach the concourse level of the station through stairs or escalators. The concourse level will have a security check ticket kiosk and AFC (Automatic Flare Collection) gate, toilets and other common facilities. Afterwards, the passengers are permitted to go up to the platform level and board the next train. Partapur MRTS station is being made by NCRTC on the infrastructure of RRTS from where the residents are provided with local services for the Meerut metro.

The UP government has dispensed around 1,326 crores for this project as almost 68 km of this corridor falls in UP. The Partapur Metro station will be furnished with the best travel experience and safety equipment as well, same as in other RRTS corridors, where passengers can see the arrival and departure times of trains on the screens and boards.

How many stations will be there in Meerut?

About 12 km of this Delhi-Meerut corridor will be constructed underground, of which around 8 km will be in Meerut and around 4 km will be in Delhi. In Delhi, the construction work for the underground corridor has been started in Anand Vihar. Tunnel boring machines are being used to make tunnels.

The trains for this corridor are being manufactured in Gujarat, Savli at Alstom's factory. The manufacturing is being done under the Make in India Initiative. These will run at a speed of 180 kmph, and it will be the first time when this kind of train will run at such a large speed. With this rail, it is now easy for people to reach their workplaces on time.

This is a great initiative taken by the government in the favour of the people. Now it is easier as well as convenient for people to travel from Meerut to Delhi and Delhi to Meerut in less time.