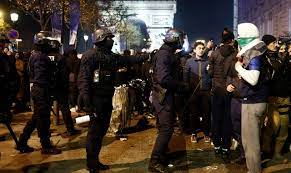 Tragedy struck as a 14-year-old boy was killed in Montpellier amid clashes between France and Morocco fans following the World Cup semi-final.

In a statement by the local government officials, it said that the boy, whose identity could not be verified, stated that the boy was "violently hit" by a car in the city, in the south of France, on Wednesday, December 2022.

Several videos shared on social media showed crowds in the street milling around a car being driven erratically. Another tape purporting to show the incident in which the teenage boy was killed, shared on social media, led a group of supporters ripping a France flag from a white car that sped off.

Local reports say the vehicle that hit the young teenager fled the scene soon after. However, the car was found near the scene, and police are still investigating and looking for the driver of the Montpelier vehicle.

The Department of Herault was also found saying: "He was transferred to the hospital but died shortly after arrival."

France and Morocco's fans clashed in Paris following the game, and Police in riot gear were called to disperse the crowds. The clash started as just earlier, France had secured their place in the World Cup Final in Qatar after beating Morocco 2-0.

France will now play against Argentina in the Qatar 2022 final on Sunday, hoping the become the first country in 60 years to defend the World Cup successfully.