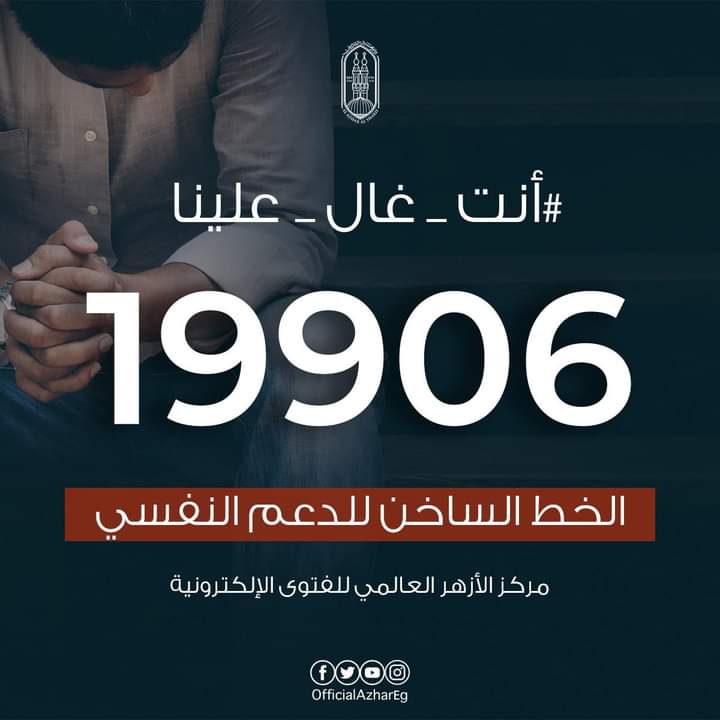 The Al-Azhar Center has relaunched the initiative "You are precious to us." To listen to young people and provide them with psychological support and constructive communication in order to assist them in solving their problems and overcoming their challenges; via his official Facebook account.

As the initiative was launched a year ago and was re-launched on Thursday, after young people committed suicide, the center dealt with thousands of cases of people who were contemplating suicide and succeeded in keeping them away from these thoughts.

The center offers this service free of charge in order to encourage anyone suffering from stress or psychological problems to seek psychiatric help.

Indeed, within 24 hours of the initiative's re-launch, the center dealt with only 15 cases of people planning to commit suicide and end their lives, and the center was successful in preventing them from having these thoughts.

Many cases contact the center by phone and receive the necessary psychological and religious support, while others are brought to the center's headquarters when others are dealt with by the center's scientists and specialists in their homes.

According to the Center's research, the reasons for thinking about suicide are numerous and varied, with the most common being economic reasons, followed by family reasons, and a lack of parental support.

The FB post included: Do not despair, do not grief, and never lose hope; rather, face life with certainty in God's kindness, with strength and toughness, but also overcoming its challenges and obstacles, there will come a day when you will remember the days of hardship after God helped you overcome them, and they will be only a memory. Just be patient, try, and remember God.

The center concluded, "If you have a question or inquiry, or if you need someone to listen to you and give you honest advice and guidance, as well as psychological and moral support, we are the Al-Azhar International Center for Electronic Fatwas." We welcome your contact and can be reached at phone number: 19906 on official working days from nine a.m. to four p.m.