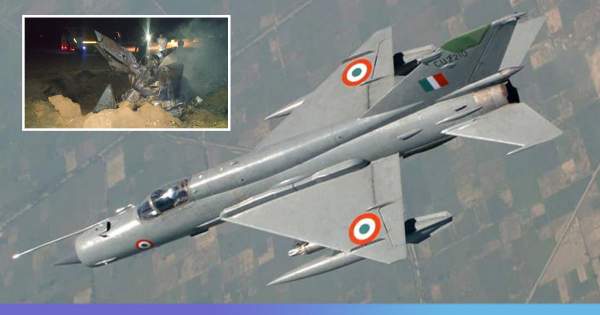 One of the pre-eminent acts of devotion is dedicating one's entire life to serving the nation. However, several life-threatening circumstances are involved in this noble act of service. The most famous is the World Wars. Wars are tragic since both the victory and the loss result in the loss of life. In these battles, the brave lives that are not afraid of martyrdom die. These fearless warriors do not deserve to die in an "accidental" manner in exchange for their courage and loyalty to the world.

One such regretful loss of a warrior is of IAF officer Abhinav Chaudhary, who died on May 20, 2021, in yet another Mig-21 crash on the open fields of Langeana village in Punjab's Moga district. “Pilot was IAF MCC Squadron leader Abhinav Chaudhary,” Moga SP (HQ) Gurdeep Singh said. After a four-hour search, his body was discovered 2-kilometers from the crash site. The parachute was discovered open, SOS, was sent from his device, but he had already died. According to reports, he attempted to land safely with a parachute but broke his neck and spinal cord, Officials from the Indian Air Force (IAF) from Bathinda and Halwara had arrived at the spot, and around 3 am, his body was recovered.” The Indian Air Force expressed its condolences on Twitter, stating that a Court of Inquiry is ongoing to determine the cause of the accident. “An IAF Bison aircraft was involved in an aircraft accident last night in the western sector. Sqn Ldr Abhinav Choudhary, the pilot, died as a result of his injuries. IAF expresses its heartfelt condolences to the bereaved family. The cause of the accident is ongoing, and it is to be investigated by a Court of Inquiry,” the IAF tweeted.

Unfortunately, this is not the first time a warrior has had to depart in vain. A senior Indian Air Force fighter pilot died earlier this year when a MiG-21 Bison fighter jet crashed while taking off from Gwalior. Group Captain Ashish Gupta was assigned to the Tactics and Air Combat Development Establishment, which provides tactical instruction to fighter pilots. Due to the poor safety record of the organization, these planes inducted into the Air Force in the early 1960s are often referred to as "flying coffins." Since 2010, more than 20 MiG 21s have been involved in collisions, according to official data shared with the Parliament at various times by the Defence Ministry. 38 MiG 21 planes crashed between 2003 and 2013.

According to sources familiar with the situation, the Air Force still has four MiG 21 squadrons, and while the phasing out was supposed to begin in 2022, the current depleted squadron strength may have caused a slight delay. However, all four MiG 21 Bison's squadrons are said to be phased out over the next five to six years. Every few years and even months, the aircraft goes under a system failure resulting in unfortunate accidents. The Soviet Union ceased the development of the Mig aircraft in the 1980s. In addition, several countries globally began phase-out and replacement of the airship with other modern technology, leaving India as the only country with such a trained Indian Air Force.

According to official records, more than 180 pilots have died in MiG 21 crashes. Approximately 40 civilians have also died as a result of these accidents. It's little surprise that these planes have earned pseudonyms like "flying coffin". Nonetheless, we continue to use them constantly, both for training exercises and in actual combat situations. The IAF plane that got shot down in Pakistan was a MiG-21.

The Indian government recently declared that the Tejas, an indigenously built and produced light combat aircraft, would be replacing the MiG 21 fleet, even after improvements had extended their lives. The Tejas program's delay, on the other hand, has impacted the MiG 21s' phase-out schedule.

As a result, India opted to improve the turbofan engines, radars, and avionics of its MiG-21s to extend its Total Technical Life (TTL). Regardless of these improvements, the plane has a slew of issues. While in afterburner, the engine operates on a close range to its surge line, and even small bird ingestion can cause an engine surge/seizure and flame out. Moscow has repeatedly warned India that buying defective second-hand spares from countries such as Israel and Ukraine would result in mishaps. “The IAF is compelled to continue using the MiG-21 in the absence of a suitable alternative,” Air Vice Marshall SJ Nanodkar explained and stated that This will continue because there are no imminent replacements on the way.”

A country's defense system is a prerequisite to halting the enemy's offense, and it entails several steps taken to ensure the safety of its citizens. India is surrounded by powerful nations such as China and Pakistan, both of which have formidable military capabilities. The loss of India's assets, i.e., its men in uniform, in these accidents is a tragedy caused by decades of poor governance. Worse, these concerns, which must be the most important, are drowned out by insignificant political quarrels that lead the country nowhere.

However, the government should be commended, for granting more financial authority to the three defense services to improve their performance. The appointment of the Chief of Defence Staff would also ensure that resources are deployed systematically, where they are needed. These actions may indicate future progress.

As a result, it is critical to understand that national defense must be carried out legally, with the primary goal of protecting citizens and the state's interests. The result is achieved through the full engagement of state institutions with field responsibilities, who use all of their resources to ensure independence, territorial integrity, and democracy in the face of any aggression.

The situation is difficult because there is so much going on as a result of the pandemic. Nonetheless, the value placed on those who put their lives on the line for our peace and stability must not be jeopardized. It is past time for the IAF and the government to investigate and resolve the Mig issue at the earliest.