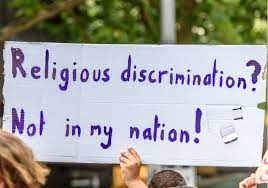 This recent case of 303 Creative LLC v. Elenis is a fine example of the oddity of modern American lawmaking and the general US political climate. It is essentially a part two of the 2018 case Masterpiece Cakeshop v. Colorado Civil Rights Commission. Both cases dispute the rights of LGBTQIA under the guise of religious doctrine, and both cases are about marriage. Optically, the chances are more in the line of Capitalism-based marginalization cases. Akin to segregation era “whites only” businesses. Except specifically targeting LGBTQIA people instead of black people.

In the Masterpiece Cakeshop v. Colorado Civil Rights Commission case, the baker and owner of the Lakewood Colorado business, Masterpiece cakeshop, refused to make a cake for the wedding of two gay customers. The shop owner’s name is Jack Phillips, and the gay couple’s names are Charlie Craig and David Mullins. Craig and Mullins reported Phillips’s transgression against them to the Colorado Civil rights Commission, a state-sponsored regulatory agency.

Regulatory agencies are “independent governmental bodies established by legislative act to set standards in a specific field of activity, or operations, in the private sector of the economy and then to enforce those standards…” according to Britannica. The CCRC is explicitly focused on consumer rights. A video on their page dictates examples like: “a utility customer questioning her gas bill in grand junction…” and “an injured skier can pay medical bills for his broken leg because of how Colorado handles health insurance.”

In this case, the intent of the CCRC and the Mullins/Craig couple was to protect their consumer rights on the foundation of their sexual orientation. They were successful at this at first. In Colorado lower courts, they won the case with the help of the Colorado Discriminations Act. Which states: “Colorado’s anti-discrimination laws guarantee equal access to public accommodations, housing, and employment regardless of disability, race, creed, color, sex, sexual orientation (including transgender status), marital status, family status, religion, national origin, or ancestry.”

Phillips appealed the case under the guidance of the “Alliance defending freedom,” or the ADF. The ADF is a “legal organization committed to protecting religious freedom, free speech, the sanctity of life, parental rights, and God's design for marriage and family.” This means they work for fundamental religious beliefs, pro-life, keeping CRT out of public primary schools, and supporting heterosexual marriage.

There are plenty of statements supporting these American political positions on their website. Still, the only place they have relevant to these two LGBTQIA cases is the last one. “God’s design for marriage and family.” The website claims that “ADF believes marriage is the union of one man and one woman.” Or in other words, the ADF is homophobic because of its religious beliefs.

The Mullins/Craig couple also picked up a new sponsor in the American Civil Liberties Union or the ALCU. The ALCU is a county-wide not-for-profit founded in 1920, which seeks to support marginalized groups who have historically been oppressed. They are a countrywide organization and therefore have significantly more resources than the CCRC, which is a state-wide organization.

The Phillips appeal was on the foundation of him losing some number of his profit due to the lower court case. This was because he ignored the lower court orders to serve all types of weddings without regard for their sexuality. Instead, he shut down the wedding cake catering branch of his business entirely. This, unsurprisingly, significantly tanked his profits. However, that foundation wasn’t strong enough for the Colorado supreme court. They rejected Phillips’s appeal.

However, this was part of the ADF’s plan. If Phillips’s case were going to end in appeals court, likely, titanic organizations like the ADF and ALCU wouldn’t get involved. The Colorado supreme court is made up of 7 democrat leaning judges, so the chance of a fundamentalist Christian, conservative appeal like this one winning in this court was incredibly unlikely. However, the US supreme court is recently owned by a conservative majority. The Republican denial of Obama’s late attempt to instate a democrat judge Merrick Garland in the place of the recently deceased Antonin Scalia left the supreme court at a 5-4 republican majority. A ripe climate for a fundamentalist Christian, conservative appeal to claim its first victory.

The US supreme court agreed to hear the case, and oral arguments began on December 5th. The ADF employed a different strategy than Phillips's to appeal to the Colorado supreme court. Instead of approaching the issue in terms of funds lost by Phillips’s business, they closed it on the grounds of free speech. They argued that the Colorado Discrimination Act discriminated against Phillips’s first amendment right to practice his religion. In other words, they argued that Phillips’s complaints were an issue of speech, not an issue of civil rights.

With this argument, Phillips and the ADF won the supreme court case in a 7-2 decision. Only the late justice Ruth Bater Ginsberg and Justice Sonia Sotomayor dissented.  Although the court reversed the ruling, they didn’t decide fully that Phillips’s discriminatory religious beliefs constituted speech. They agreed that the CCRC was too strict on Phillips and that the organization was perhaps discriminating against him.

The effects of this decision tie directly into 303 Creative LLC v. Eleni's case. I said that this case is part two of the Masterpiece Cakeshop case because both issues are founded on the same principles, with the same players on both sides of the field. But this time, the game has more stakes.

The ADF has proposed this case to the supreme court with website creator Lorie Smith. It’s the center. In this case, Lorie Smith is pretty much precisely like Jack Phillips. She’s an example of a fundamentally religious catholic, claiming that an obligation to serve a gay marriage violates her first amendment rights. However, unlike Phillips, Lorie has yet to run into a scenario where she has been forced to do gay marriage. She has only just recently decided to focus her attention on wedding websites. So, when she sued the state of Colorado in 2016, the action was a precautionary measure rather than a reactionary one.

Coincidentally, or perhaps not so coincidentally, 2016 is the year she decided to start serving weddings with her website creation skills. This means she placed herself in a new occupation that could test her religious freedom of expression by switching to wedding planning. She didn’t have to do this. According to her website, she has skills in “marketing, advertising, graphic design, branding, strategy, and social media consultation…” which are certifiably helpful in the internet age. Going into wedding planning isn’t likely the most profitable venture she’s capable of.

So, after unnecessarily placing herself in a position where her definition of free speech had the potential to be tested, she didn’t wait for such a test to come and instead sued Colorado on the potential of such a thing happening. This timed out her inevitable losses in the lower appeals court of Colorado to finish just four years after the Masterpiece cake case. Smith’s writ of certiorari was granted in February 2022, and oral hearings began six days ago, on December 5th. She was bringing this disguised civil rights case to the modern day.

With the foundation of Phillips’s supreme court win, the recent death of liberal-leaning judge Ruth Bater Ginsberg, and her replacement with conservative-leaning judge Brett Cavanaugh, her case is primed for victory. Unlike the Masterpiece cake case, this case is likely to significantly damage the civil rights of LGBTQIA people and other minority groups. Namely because of the very slight foundational difference between the two cases.

The overall goal of the ADF here is to equate discrimination against LGBTQIA people with freedom of speech. Moreso than that, the purpose of the ADF is to convince the court that fundamentalist Christians are the one’s being oppressed, not gay people trying to get married. And on top of everything, the ADF is trying to convince the court that what they’re doing is not discrimination; it’s freedom of speech.

For that purpose, a website creator is a perfect profession to find a case on. Or actually, it’s not perfect; it’s just better than a cake. It’s super hard to argue that a cake represents free speech. It’s something that one eats; then it goes away. It doesn’t often have any overt themes in it, it doesn’t have any messaging, and it doesn’t even have any significance to the original Christian ceremony. It’s just a cake. A website does have themes, messaging, and potentially traditional energy in its foundation. It’s a much more palatable example of speech than a cake.

Even with the less palatable version of the speech in the cake, the supreme court still ruled in favor of Phillips. So, giving them a more evident speech example is essentially just loading up ammo in this conservative court’s clip. It’s for that reason that this case is likely to be yet another blow to the civil rights of the American people.

The judicial court, as it is now, seems intent on repealing what little progress we’ve made in the way of civil rights. They’re quickly stripping the rights away from women’s autonomy with the new abortion laws, and now they seem to be targeting LGBTQIA people’s rights. It’s important to note that they’re doing all of these things based on or because of fundamental Christianity. It’s for that reason that laws legitimizing discrimination based on the religious freedom of speech are hazardous.