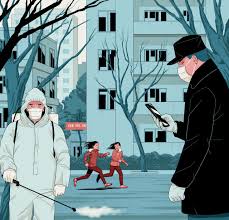 The surprises brought by the new decade are no less than a thriller movie with horror, drama and suspense altogether. Being quarantined or locked down in our own homes has made us realize and witness the sweet and bitter truth of life. When some of us showed the light of reality, some other revealed the darker shades of cruelty. The new normal not only had us in shock but also amused by how it made the impossible look possible. Indians, who habitually spit on public roads and walls, are now washing their hands regularly and maintaining physical hygiene. With most of the states still continuing the lockdown amidst ‘Unlock 1.0’, let’s take a look at what we have been through. Panic! We all know how this emotion has been circulating in our veins since March 25 th or even before the virus made its way to India. A little virus has forced billions of people to settle in their houses and till now, it continues to cause panic.

Now one thing that hit us, humans, really hard is that the earth doesn’t need us in any way. Indeed the earth started recovering quickly with the dusk of human activities. Yes! Earth is enjoying a break from destructive human activity and it is actually working perfectly. The sky in most of the industrial areas is now clearer and air pollution in these areas has decreased to almost 50% compared to the pre-lockdown period. PM10 and PM2.5 have reduced by half and carbon emissions have dropped to unprecedented levels. The chirping and cheering of nature are more audible as noise pollution levels have plunged to an unbelievable level.

What can be more relaxing than the dolphins in Venice sinking the whole world in a pool of bliss! Cities enjoyed tranquillity that they thought never existed. We kept ourselves at our homes without junk food, busy schedules or weekend parties. Instead, we realized that it is not so difficult to live without them. Individuals were also compelled to partake in the difficult task of managing the household. Men and boys stepped forward to give a hand to their mothers and sisters for domestic cleaning.

Alarmingly, while some of them enjoyed their little paradise with their families, some were subjected to abuse, physical and mental assault and falling of their family. The United Nations has described the worldwide increase in domestic abuse as a “shadow abuse”, alongside COVID-19. The abuse cases have increased by 20% globally with not only women but children undergoing the same trauma. From the rape of an 18-year-old by her father while her mother watched silently, to the 3-year-old boy beaten brutally by his mother and stepfather, homes have turned into dens of evil.

Familiarity breeds contempt. Family consultants and lawyers are reporting a spurt in the number of queries regarding divorces. Even small issues, that later become ignited fights between couples, are encouraging them to file petitions against their partners. It is sad to see that a set of parents are forever breaking the bonds with their children during a period which was supposed to bring them together. The Indian economy is currently on the verge of recession because of the sudden pause in industrial activity and domestic labour. The Economic Times reports that the lockdown in the areas which contribute to 60% of the GDP is sinking the Indian economy into a deeper crisis. The lockdown has impacted different people in different ways. For those who were swamped with endless work lives, it has been a ray of solace, while for the daily wagers and domestic laborers it became a nightmare from which waking up again seemed almost impossible.

Now, this is where we focus on the loose threads on which our society is built. The COVID-19 pandemic has shot migrant workers in their guts. Even with a massive number of workers stepping on the roads to go back to their homes without any means of transport, the state and the central authorities cared less and it became too late when some aid was finally provided. Along with the country, was their deontic logic also locked down?

The education system is yet another most affected field due to the lockdown. The board exams and university exams were postponed. It's the first time in this millennium that many exams are getting cancelled and students are offered a ‘free promotion’, elevating their joy. Schools and universities are in a run to cover the syllabuses with the help of online classes and assignments. States like Tamil Nadu and Kerala are setting an excellent job in reaching education inside homes. But again, it’s not as effective as classroom learning and students are already missing the ‘school vibes’.

Satisfyingly, society is starting to accept nursing and sanitation, a noble job worth of saving lives. People are starting to realize that the number of health centers and hospitals are no less than treasures and that, during a crisis, these buildings are the only promises that protect our faith. It is clearly evident with the religious institutions turning into dusty buildings while the health workers are being called “the messengers of god’’! Hospitals are the new temples of hope, doctors and nurses are the new angels and the sanitation workers are the most beloved to the gods.

Lockdown has taught us that life can be easy and peaceful even without the malls, theatres, luxury boutiques, public parks and beaches. Until and unless we have enough grocery stores and pharmacies, life is not really hard but simple and majestic! The government made noticeable steps to reach the food ration in the houses. The Indian households with access to enough supplies have experienced the aroma of a variety of dishes that only appeared in restaurant menus before and needless to say, the grocery stores are getting good business.

However, the farmers are always among the worst hit during any crisis. Be it a pandemic, an economic crisis or a war, they are prone to suffer. I am focusing on the word ‘prone’ even when it sounds harsh because, since ages, no reforms have been brought to secure their hard work.

Even with different ‘yojanas’, their losses are not compensated properly and as always the powerful are sheltered. With no market and storage houses opened, these farmers were helplessly seeing their crops getting destroyed by the locusts and storms. It seems that the global lockdown has made many people reflect on their jobs and careers.

"How much ever the private firm paid me, they could never promise me any security for my hard work", says an NRI who recently quitted his job after his salary was reduced to 60%. He further added that now he is &quot;excited&quot; to prepare for state service examinations.

We have started limiting our virtual universe to mobiles, laptops and televisions as theatres were also taking a vacation. The television broadcasting is higher than ever, especially the news channels are hitting a fortune. Entertainment platforms like Netflix got no chill. BBC reports that Netflix got 16 million new registrations and Amazon prime is right behind in this race. The Indian televisions broke the records with the broadcasting of Ramayana. So far, we have suffered a lot of unfortunate incidents including the death of a lot of talents. With the demise of Rishi Kapoor, director Sachi, Irfan Khan, Sushant Singh Rajput and many, 2020 has already become our enemy.

Let's take this time to pray for our soldiers facing yet another disaster on our borders. Things have been difficult lately and it's much harder for them. The media we handle daily are much worthier than a TikTok vs YouTube debate and can really bring the real issues to the forefront. We are not sitting in our homes, locked behind the doors, to see the world going blasé again. Trust me, a change within the boundaries is powerful enough to undo the jinxed lockdown.

The anxiety of quarantine: Have you been through this?

Trails of struggles: Migrant workers at the time of Lockdown