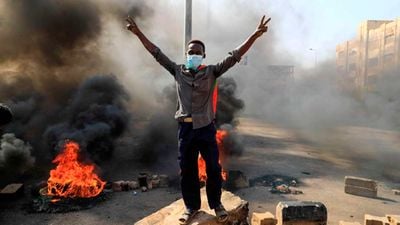 “People are getting stronger. It is impossible to return.” When Sudan's military annexed the civilian leadership power on Monday, civilians were chanting these words. Because they think history is going to repeat itself.

General Abdel Fattah Al-Burhan, the chairman of Sudan's ruling body, proclaimed a state of emergency on Monday after arresting Prime Minister Abdalla Hamdok and his ministers in Sudan, North Africa. Hundreds and Thousands of protesters gathered to condemn the coup, which jeopardized the country's fragile democratic progress. The Prime Minister and his delegation, including his family, were taken somewhere undisclosed. The Prime Minister, according to sources, has been transported to an unknown location after refusing to make a statement supporting the coup.

Sudan's Defence Minister Abdel Fattah al-Burhan said the military is suspending the constitution, and they will be in charge of the country for the next two years. He stated, "The Armed Forces will continue to complete the democratic transition until the country's leadership is handed over to a civilian, elected government."

A botched coup attempt that occurred lately has heightened tensions between civilians and the military. Citizens were blocking roads, bridges and lighting fires in Khartoum after hearing the report of the coup attempt. Many were killed and wounded when soldiers opened fire on the crowd. One wounded protestor informed the reporters that the army shot him in the leg outside the military headquarters, while another said the military used stun grenades first, then live bullets.

General Abdel Fattah Burhan attempted to explain the coup by citing internal political strife. Local demonstration organizers are said to have been arrested by troops who went house to house in Khartoum.

The Soldiers also stormed out to the media Headquarters, and they have made dominance over the media by arresting the employees. The Committee to Protect Journalists alarms the Sudanese military to respect press freedom and journalists' safety. The city's airport has been closed, and international flights have halted. The internet is also down, as are most phone lines.

The United States had joined the United Kingdom, the European Union, the United Nations, and the African Union, which Sudan is a member of, calling for the release of political leaders held in unknown locations under house arrest.

Earlier today, Burhan stated Hamdok had been held for his security and would be soon released. However, he warned that other members of the dissolved government could face trial as protests against the coup continued in the streets. Sudan's civilian and military leaders reached an agreement in 2019 to lead the country toward democracy, but it has proven fragile after several coup attempts. The previous coup occurred just about a month ago.

Sudan is one of the worst countries in the Arab states for human rights, especially for Women. Even after Omar al Bashir was- dethroned from power, Sudanese women have yet to enjoy their newfound freedoms in complete essence. The experts reported that girls are allowed to marry from the age of 10.

Since the fall of Omar al-Bashir's dictatorship, Sudan was governed by the Sovereign Council, a military-civilian organization that was the highest power in the transitional government. Omar Hassan Ahmad al-Bashir had been the 7th president of Sudan for almost three decades. He was a man who was born to lead, but his heart was an axis of evil. Omar al-Basheer ascended to power in 1989 during a military coup and remained President for the next 30 years by cunningness and cruelty. When the famine happened, he led his citizens to suffer and die. He was arrested twice in 2010 and 2012 for five counts of crime against humanity: murder, extermination, forcible transfer, torture, and rape. Yet, Omar al-Basheer ruled over Sudan with an iron fist.

However, on December 19, 2018, thousands of demonstrators took to the streets to protest the country's economic decline under al-Basheer. Inflation had soared to over 70%, and bread prices had increased considerably as well. It wasn't the only reason for their protestant. They were dissatisfied with his terrible rule. In April, thousands of people surrounded the army headquarters and made history. The military started to crackdown on the protesters. However, some soldiers began to protect the anti-government protesters. That was the start of what would be Basheer's demise. After 30 years of power, President Omar al-Basheer was toppled and arrested by the country's military coup. Although his 30-year reign of terror ended, that was not enough for the Sudan civilians. They wanted to wipe out the entire regime he raised. They also wished for a civilian government to represent their dreams and hopes.

The new military power headed by Defence Minister Awad Ibn was far from what the citizens demanded. The military planned to suspend Sudan's constitution and said that Ibn would become the leader for the next two years. But people in Sudan were not happy. So, the protesters perpetuated revolution again in the street of Khartoum to show their pejorative. The people in Sudan were hoping for a change and a development like a new era. They were not ready to be clowning around by any more political games. The Sudanese people ousted another leader of the office. On April 11, 2019, Lt. General Abdel Fattah Abdelrahman Burhan took over as Auf's successor as the head of Sudan. Although people felt like Abdel Fattah was somehow much easier to work with, many protesters asked for a civilian government. Burhan announced on Saturday, April 13th, that a civilian administration would be constituted soon. Burhan stated that the transitional period would last a maximum of two years. That was the beginning of Civilian-Military leadership.

Today the country of Sudan has been burning in ashes. Many have been killed and wounded by their own military government. A leader who should protect their people is leading them to death. The citizens believe that one day they can walk in the street freely without any fear or discrimination. Let them fly higher than their limits. Let's hope for a better tomorrow!