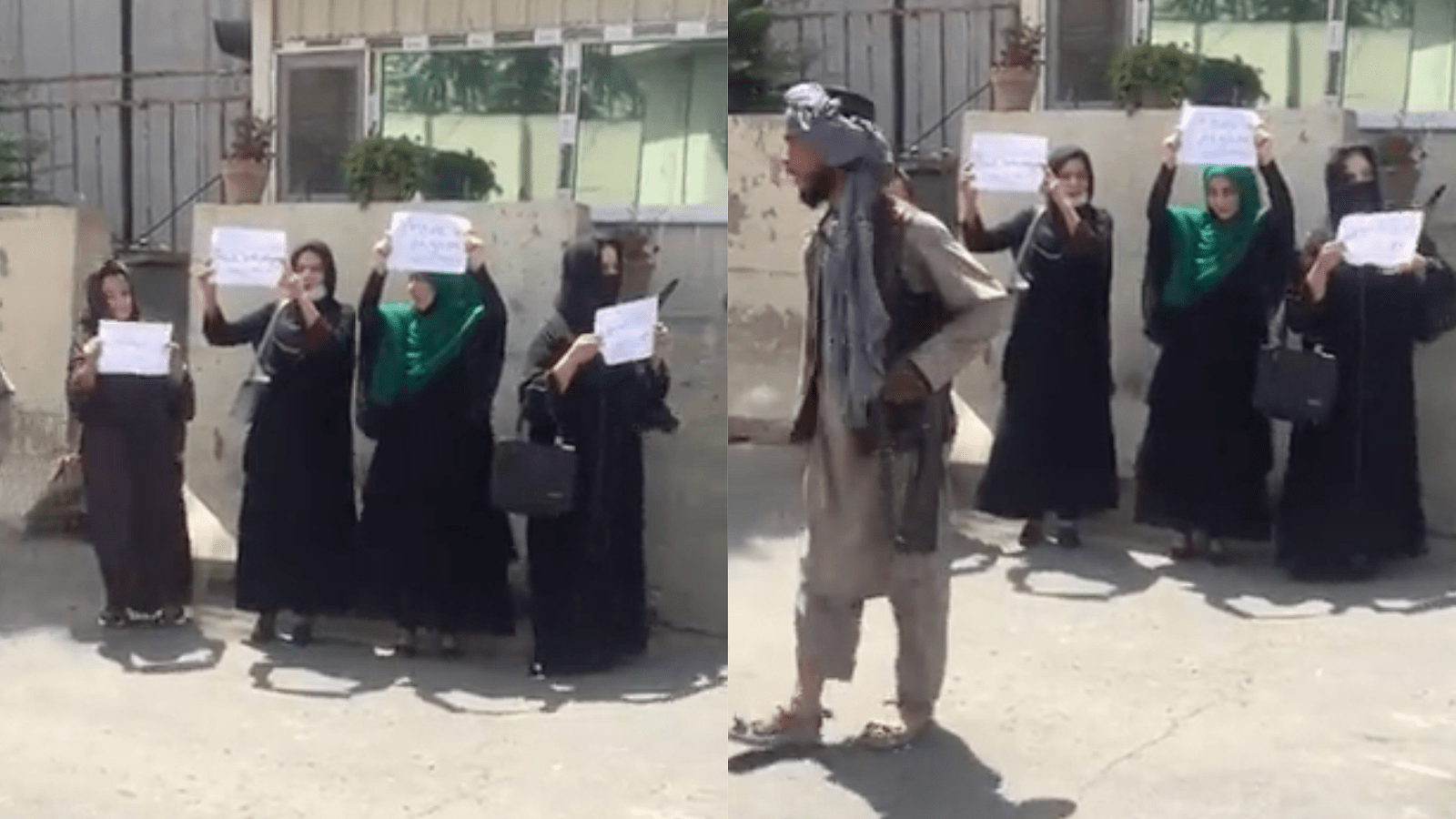 As the world witnessed the fall of Afghanistan and the reinforcement of a system that runs on the principles of terror and inhumanity, we see a step of fearlessness taken by the people who are the most oppressed under the Taliban regime, the Afghan women.

When you are on the verge of losing everything, you become undaunted. The same was the case of four Afghan women who shocked the world with the first women’s protest in Kabul after the Taliban’s takeover. “We want our rights, here are women, we want social security, no ban on work, the right to education and the right to political participation. No force can ignore and stifle women. All our achievements over the years should not be compromised and our basic rights!” (translated), they said.

On the pretext of “peaceful transfer of power”, on the assumption that the Taliban’s tactics might have changed over 20 years, the world can shut its eyes on Afghanistan today. But what about those people, especially the women who have seen dreams of a dignified life and success on that land and are now watching their dreams and aspirations shatter down to the horrors they once escaped?

Under the 1964 Constitution Afghan women were given democratic rights and the seeds of equality were sown, which unfortunately could never completely grow. Under the rule of Amanullah Khan (1919-1929), women’s freedom was given considerable importance. Under the Communist era (1978-1992), also known as the golden age of Afghanistan, women were on the rise even in rural areas. However, it was all snatched away from them in the blink of an eye by the Taliban from 1992 onwards. Even after the takeover by the US in 2001, although women were not deprived of their rights like earlier, they lived in a state of a constant state of fear in Afghanistan because of the ongoing war between the government and the insurgents.

The courage of protesting women in Afghanistan today, in front of the Taliban is with guns in their hands and barbarism in their minds, stems from the liberty they once had. These women have lived in Afghanistan which did not allow education and work for women to having all-girls school on the same land. Even for the past two decades these women could go to schools, universities, offices, salons or simply roam on the streets without the fear of being shot. After longing for that liberty and having it, they can’t let go of it without raising their voice, even at the cost of their lives.

People all over the world, especially women praised and acknowledged the courage of those protesting women in Kabul from the comfort of their homes, wearing whatever they want to, from devices these women might never have access to now, reminding us of the reek of privilege we have. Taliban might claim that it won’t curb women’s rights this time but what they might be aloof of is that this time, the Afghan women won’t give up before fighting for their rights and they have proved it right on the onset of what could be the beginning of another period of inhumanity in Afghanistan. Alternatively, it could also be the most heroic step in the history of the fight for women’s rights in the gravest of circumstances. Generations of Afghan women will not hesitate to stand up for themselves, even when they are surrounded by the Taliban.