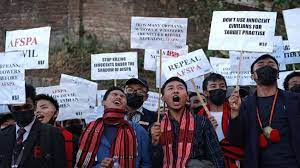 On Wednesday, the panel set up by the Union Home Ministry missed its deadline to submit their report on withdrawal of AFSPA (Armed Forces Special Powers Act) from the state of Nagaland. The centre assigned a six-member committee, headed by the Registrar General of India, Vivek Joshi, to study the case of withdrawing the AFSPA from Nagaland after the Nagaland Chief Minister, Neiphiu Rio’s request. The committee was set up in December and had to submit the report within a 45–day deadline.

The issue escalated to a prime concern in the North- eastern hill state because of a fatal attack on locals by the Army during the first week of December. On December 4th, 13 local people were killed in an army encounter near the area in Mon district of Nagaland. The incident was shocking and surprising at the same time for the people in the valley and across the country. The Home Ministry later confirmed that the encounter happened under “mistaken identity”. 13 men of the land were brutally put to death in an act of ‘mistake’ and were passed under the cover of AFSPA imposed in the state.

The public enrage and protests following the incident created a heavy state of unrest in Nagaland and the rest of the country. This led to the Chief Minister’s request to the centre to consider the withdrawal of Army’s sole power in the state.

The Armed Forces (Special Powers) bill was passed by both the houses of the Parliament and the President of India assent of it on 11th of September 1958. Under the Section 3 of the Act, the Governor of the state could identify the areas of civil unrest as “disturbed” areas and the Army could take the control over the region. The Act enables the Army to put down the disturbances using force, even by the use of firearms after considerable warnings. The Army had more liberal powers as to arrest the rebels with no prior notice and also to conduct raids in the villages with no warrants if there were cases of rebel suspicion.

The AFSPA was imposed upon all the North- Eastern States of India in 1958, but was repealed from the States of Tripura and Meghalaya later.

The history behind ASFPA in Nagaland

Nagaland is a small hill-locked predominately tribal region at the far end of North-eastern India, sharing borders with Myanmar. The region enjoyed considerable autonomy under the British empire in India because of their geography and indigenous customs. As India was voting to be an independent state in late 1940s, a wave of concern occurred in the Naga hills about their autonomy and protection. Backed by the British empire, the Nagaland National Council (NNC) approached the government of India for consideration of Nagaland as an autonomous state. The reluctance from the Nehru government escalated into a widespread protest in Naga hills for their independence and for protecting their isolated communities and land from outsiders. Several leaders like Angami Zapu Phizo rebelled against the government of India in the Nagaland National Movement, which later took a radical turn of violence and unrest. The Indian government sent troops to the valleys and forests of Nagaland to contain the ‘violence’ and in 1958, the AFSPA was passed and imposed in the state.

Why are the Nagas protesting?

The people of Nagaland widely opposed the Draconian Act as it granted the military sweeping powers over the civilians. The military, as complained by the people, misused the special powers under several circumstances, including the recent December encounter. There are allegations of brutal violence, rape and killings against the military by the people of the valley.

In December, the troops attacked the local coal miners under a false encounter of mistaken identity that left 13 people dead. The Villagers of the neighbourhood recall the sound of gunshots from the forest and the area of encounter with burned down vehicles and dead bodies. As the army personnel involved in what is appeared to be a crime were spared by the authorities under the AFSPA, it was more than enough for the people of Nagaland to hit the streets declaring mass protest.

Earlier Attempts to repeal AFSPA in the North-East

The civilians of the North-eastern states had always objected the military tyranny in their villages and homes since the Act came into power. The AFSPA that was imposed in all states of the North- eastern territory of Indian in 1958 was later repealed from the states of Tripura and Meghalaya.

In the year of 2000, Manipuri Activist Irom Sharmila began her hunger strike demanding the withdrawal of the Army and repealing the AFSPA from the state. The hunger strike extended for 16 years and was the biggest protest against military brutality in the region. The former UPA government had also made panels and committees to study the situation, yet all the efforts found no fruit in the end.

The AFSPA comes under the central government; it is stated that implementing this law would be with the consent of respective state governments. But this decorum was not followed in states like Tripura, where there was an opposition from the state. And the Nagaland state government is now demanding the repeal of the Act from the state, after several earlier attempts had failed.