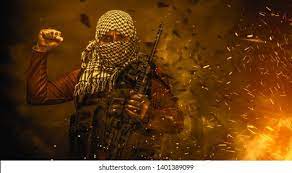 According to police, an Al Qaeda cell discovered in Uttar Pradesh was planning terrorist attacks, including suicide bombings, in the congested areas of Lucknow and other cities in the state.

Minhaj Ahmed and Maseeruddin, commonly known as Mushir, from the Lucknow district, have been detained.

According to the authorities, explosives and weapons were found at the residence of Minhaj Ahmed, a man in his thirties living in Kakori, Lucknow district.

Another team searched Maseeruddin's home in Mariahu, Jaunpur district, and discovered a huge number of explosives as well as a cooking set that could be used as a homemade bomb, they added.

The two will appear in court, where the police will want to question them while they are in detention.

According to the authorities, the Al Qaeda squad included members from Lucknow and Kanpur in addition to Minhaj Ahmed and Maseeruddin. The arrest of the people affiliated with the Al-Qaeda terror network in Lucknow marks the country's third significant terror module takedown in a year. In September of last year, the National Investigation Agency (NIA) apprehended nine Al-Qaeda militants in West Bengal and Kerala.

According to the investigations, these men were radicalized on social internet by Al-Qaeda terrorists and were inspired to carry out assaults in several sites across India.

Minhaz Ahmed (30) and Maseeruddin (50) were detained in Lucknow and were members of the Al Qaeda-linked Ansar Ghazwatul Hind. Ahmed's father owns and operates a motor workshop in Lucknow's Dubagga neighborhood.

According to Uttar Pradesh Police, these individuals were in contact with their handler Umar Halmandi, the head of Al-Uttar Qaeda's Pradesh module. "They were preparing terror attacks in many locations throughout the state, including Lucknow, before August 15 (Independence Day)," stated Prashant Kumar, Additional Director General of Police (Law and Order). According to Kumar, the men were preparing explosions, including the use of people bombs.

According to sources, they spoke with each other via the Telegram messaging app. Meanwhile, operations are being carried out in several locations to catch the terrorists' associates, Ahmed and Maseeruddin, according to the ADGP. The ATS team had been tracking them for the last week after receiving a tip about their presence. Finally, the squad tracked them down and apprehended them at a residence in Kakori belonging to one Shahid. A bomb disposal team was dispatched to the scene, and residents in the area were evacuated.

Minhaz worked as a lab technician before founding a battery store, according to sources. Maseeruddin used to do odd jobs before his son started operating an e-rickshaw. After his predecessor Asim Umar was killed in a joint operation by American and Afghan forces in Afghanistan in 2019, Umar Halmandi assumed command of al-Qaeda in the Indian Subcontinent (AQIS). Umar was from the district of Sambhal. According to Prashant Kumar, the police learned that Halmandi was attempting to recruit Indian youths for the assignment and had identified and hired a few persons in Lucknow to radicalize and enlist them.