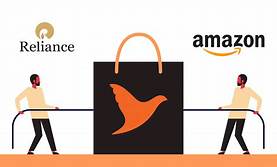 The commercial clash between Jeff Bezos and Ambani was never their own. It all began in 2019 when Amazon infused nearly $200 million capital in Future Coupons pvt. ltd (FCPL), a subsidiary of Future Retails. Ltd (FRL). It was apparently believed at the time to be an investment of purely business interests, though this investment gave the e-commerce giant a call option on acquiring the promoter stake of FCPL within the time frame of 3-10 years.

The happily ever after deal took a turn when in march 2020 FRL tried to sell its 1500 plus stores to Reliance Industries ltd. and Amazon began arbitrary proceedings for a breach of contract. As in the 2019 deal, Amazon insisted on a list of restricted parties to which Future Group’s assets couldn’t be divested without its approval.

The reason why FRL accepted Amazon’s deal with its subsidiary FCPL was solely because the former was desperate and wanted to channel funds into FRL as it was already debt-laden and Jeff Bezos saved Kishore Biyani (Founder of FRL) from his decline. And Amazon’s agenda was to set foot in the Indian retail industry from which it was earlier barred by Indian overseas investment regulations.

However, during Covid insurgencies when FRL fell into the debt trap yet again, Biyani decided to sell its retail stores chain to Reliance Industries Limited (RIL). As soon as the deal was in the air, Amazon began arbitration claims in the Singapore International Arbitration Centre (SIAC) on the ground that FRL breached the 2019 contract by deciding to sell its retail stores without the former’s approval.

But, in a recent decision made in December 2021, the Competition Commission of India (CCI) has withdrawn its approval given to Amazon for its investment in FCPL and directed Amazon to file information regarding the investment within 60 days which will then be examined afresh. Given this decision, the shares of FRL initially surged at least 20% when the RIL deal was announced last year but have lost more than a third of their value since the tussle with Amazon began.

What is CCI and why the sudden suspension of approval?

CCI is an anti-trust regulatory body set up to protect the interests of the population in general and to prevent any activities that have adverse impacts on them. Their main task is to promote competition in the market and to check that companies cannot abuse their dominant position. It also prohibits the formation of anti-competitive agreements.

CCI suspended its approval given to Amazon on the grounds that the marketing giant didn’t clarify its purpose behind its investment in FCPL. That Amazon misled the commission to believe through misled statements that the purpose of their capital infusion was its interest in the business of FCPL. While recently, CCI noted through internal emails of Amazon to FRL that they intend to acquire Future Retails. Ltd as soon as the foreign investment laws are relaxed. CCL, thus put its approval in abeyance as the real purpose of Amazon as identified is a “foot-in-the-door” of the India Retail market. The commission fined Amazon a heavy amount of $26.7 million and the 20% stake of FRL’s promoter (Amazon) is at risk. However, Amazon has decided to challenge this decision and take the Enforcement Directorate (ED) to court to question the anti-trust agency's volte-face.

What started as a commercial dispute between two companies has questioned now the adequacy and functioning mechanism of India’s anti-trust and regulatory authorities and the legal protection investors receive in India because a simple investment deal involved Amazon into a long-drawn cycle of court proceedings and even the risk of reversing its investments and suffering losses and fines. This raises a doubt in the mind of prospective investors that although the recent government claims to have made the bureaucratic convolution easier for foreign firms to operate, though it looks hardly the case.

India’s second-biggest retailer on the Verge of Bankruptcy?

The retail market accounts for at least half of total consumer spending and the global pandemic has brought a shift of these spendings towards the e-commerce market rather than retail stores. Future Retails. Ltd has been failed since 2020 to close its $3.4 billion asset deal with RIL due to the restrictions imposed by Amazon’s breach of contract arbitration. India’s second-biggest retailer (FRL) thus reported in December 2021 that it was unable to pay $470 million the company owed to its lenders due to this ongoing dispute with Amazon.

FRL is planning to approach the Supreme Court of India to urge the court to stop its lenders from taking any drastic measures against the company and to ask for a 30-day grace period to resolve the situation. Future Group still doesn’t have much time as the $3.4 billion purchase offer by Reliance expires in March and if the offer fails, FRL would suffer heavy liquidation and over 27000 job losses.

Amazon- the blessing in disguise:

In a recent announcement, Amazon has restated its willingness to assist the cash-strapped FRL with an infusion of Rs. 7000 crores in the Future Retails Group. What’s the catch?

The rider is that Amazon with the offer has warned FRL to sell any of its assets or retail stores without the former’s approval. It goes without saying that what Amazon is actually concerned about is FRL completing the asset contract with its biggest rival in the Indian market, namely Reliance Industries Ltd.

The bottom line of this commercial dispute is that the clock is ticking and India’s second-biggest retailer has less than a month to save itself from absolute bankruptcy. A business deal between two companies has highlighted the faults and loopholes of India’s regulatory authorities. A mechanism needs to be formulated to increase the ease-of-doing-business in India, where foreign investors do not fear lawsuits and long-drawn conflicts as if the current situation exists, then even relaxing of India’s foreign investment regulations will not attract prospective investors.