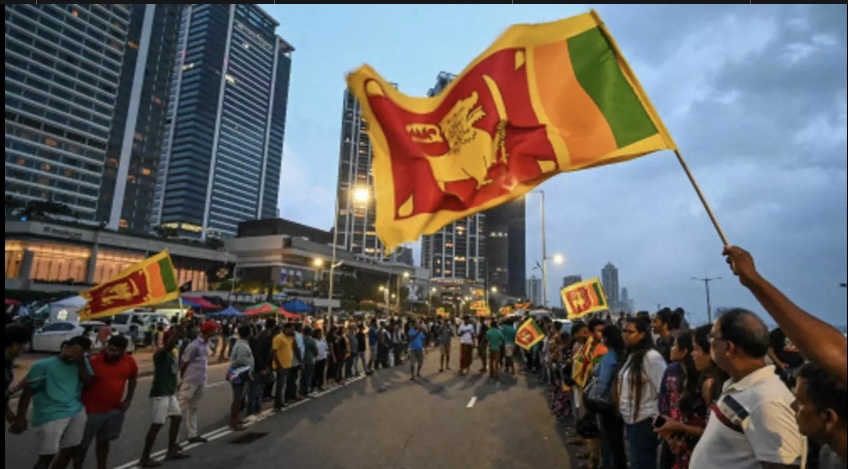 "Our Economy has completely collapsed", Sri Lankan prime minister, Ranil Wickremesinghe, announced in parliament last month. The debt-laden nation is facing an unprecedented economic and political crisis, lately culminating in its first sovereign debt default since independence. Much of the fault can be blamed on Rajapaksa's family, which has been holding multiple government portfolios for decades. Moreover, frequent changes in the government and rising violent outbreaks were adding efforts to the economic mismanagement of the island nation.

Explanation of the crisis

The Sri Lankan crisis has numerous explanations. There were issues with its policies, politics, and management. However, the root of its precarious financial position lies in the country's trade and budget deficit. The country imported more than it exported; the government spent more than it earned, making this dual deficit a fundamental cause of the ongoing disaster. 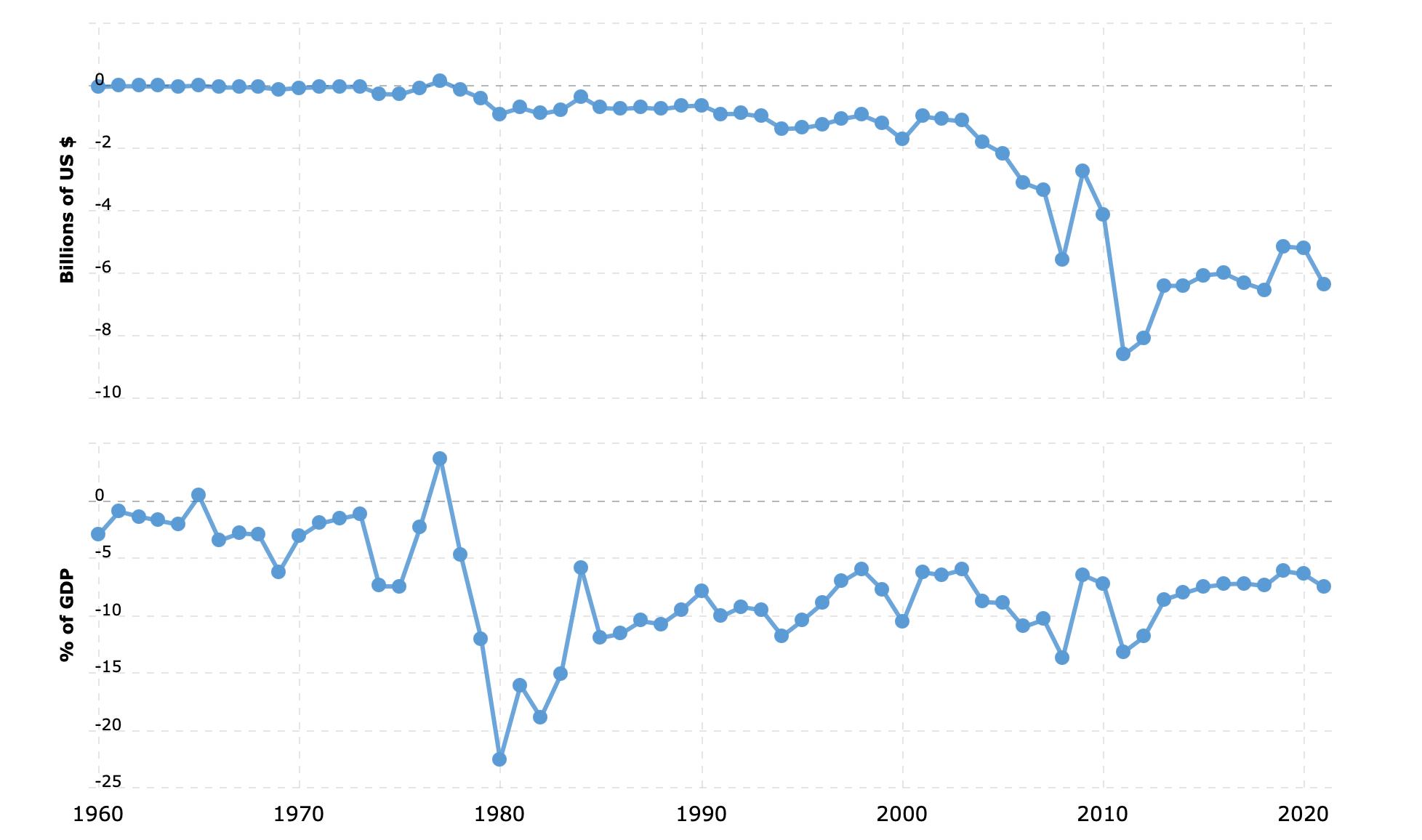 However, the other major cause was the government's disastrous response to counter the ongoing disaster. For instance, the government expanded its debt to reduce the nation's deficit. Colombo borrowed heavily from other countries and global financial institutions.

The following figure indicates Sri- Lanka's Debt- GDP ratio, which has been rising significantly over the past years. Today its Debt- GDP ratio stands at  111 %, indicating the significant excess of public debt over its Gross Domestic Product.

Moreover, the ongoing crisis in Sri Lanka directly results from years-long economic policy mismanagement. For instance, with the end of the civil war in 2009, the nation's financial policy turned inwards, resulting in the negligence of exports and reliance on imports. In 2019, newly elected president Gotabaya Rajapaksa introduced an unprompted tax cut policy that significantly decreased government revenue. Moreover, the same year, the country faced the Easter Sunday bombing that impacted one of the lucrative industries, i.e., the Tourism industry.

In 2020, the global pandemic occurred, causing the closure of borders globally and devastating the nation's tourism industry, leading to the heavy depletion of the country's foreign reserve. In 2021, the government banned the imports of Chemical fertilizers to address the shortage of foreign funds. However, only local and organic fertilizer availability led to massive crop failure. And this further ended up drenching the foreign reserves.

How is the Lankan crisis affecting its society?

According to the reports of  IFRC(International Federation of Red Cross and Red Crescent), the Lankan economic crisis has spiralled into a humanitarian crisis, with millions of people facing an acute shortage of food, medicine, fuel, and cooking gas. The absence of such necessities has severely impacted the energy and power sector, the transport sector, the health and employment sector, and the education sector, among many others, compelling many citizens to languish all day in long queues or remain at home.

While the impact of the crisis can be felt along all corners of the nation, it is the urban working poor, the daily-wage labourers, the MSME dependants, and the already marginalized community of caste, gender, religious, sexual and ethnic identities that are severely affected by the ongoing crisis. As many of these communities are surviving on subsistence wages, thus, finding these new economic and political developments enormously challenging.

Moreover, Children and women lie at the centre of the crisis. According to the reports of UNICEF 2022, the problem will severely affect around six million children. As families struggle to meet their necessities, including food and fuel, children find it challenging to go to school due to disruption in public transport. In addition to that, schools are being closed, and examinations have been postponed indefinitely due to recent political developments.

Which nations can go the Lankan way?

Like the Sri Lankan economy, dozens of developing nations are encountering the problem of rising debt, lower government revenue and drenching foreign reserves.

According to the reports, at least 19 emerging economies are on the verge of following the Sri Lankan debacle. These countries have higher Debt- GDP ratios. So, what do these countries resort to? The foreign debt.

The republic of Lebanon is a West Asian country located between Syria and Israel. Despite the nation being a world apart from Sri Lanka, both the nations share multiple commonalities. For instance, both nations share a history of violence, political turmoil, and economic mismanagement that has led to the fall of once prosperous economies.

Like Sri Lanka, Lebanon is also facing the issue of foreign reserve shortages, rising hunger, currency collapse and sky-rocketing inflation. Lebanon is the third highest indebted nation after Japan and Greece. And so far, the country has defaulted its first debt payment.

The following figure indicates Lebanon's Debt-GDP ratio has steadily risen since 2012 except in 2019. Today its Debt- GDP ratio stands at more than 171 %, implying the excess reliance on foreign debt to run the economy.

Data Source:  Tradingeconomics.com and Ministry of Finance, Republic of Lebanon

In April, Egypt's inflation rate touched 15 %, causing hardship for its one-third poor population. The soaring inflation rate was a catalyst to an already sick economy suffering from floating national currency and a high Debt-GDP ratio.

The following figure shows Egypt's Debt-GDP ratio. The figure indicates the indeterminate pattern of foreign debt assistance. However, since 2019 the country has been witnessing a steady rise in the Debt- GDP balance, currently standing at more than 93%.

Argentina is one of the largest economies in Latin America, with a GDP of US$490 billion. However, according to the International Monetary Fund forecast, Argentina faces the prospect of 90% inflation in 2022. Moreover, like the Sri Lankan economy, Argentina's economy is running low on foreign currency reserves and government revenues, along with the rising poor population.

The following figure highlights the country's Debt- GDP ratio. The data shows that the nation had an accelerating rise in the ratio till 2020. The country witnessed a drop in the 2021 Debt- GDP ratio; however, this does not imply the economy's good health since the economy is desperately waiting for an IMF bailout. 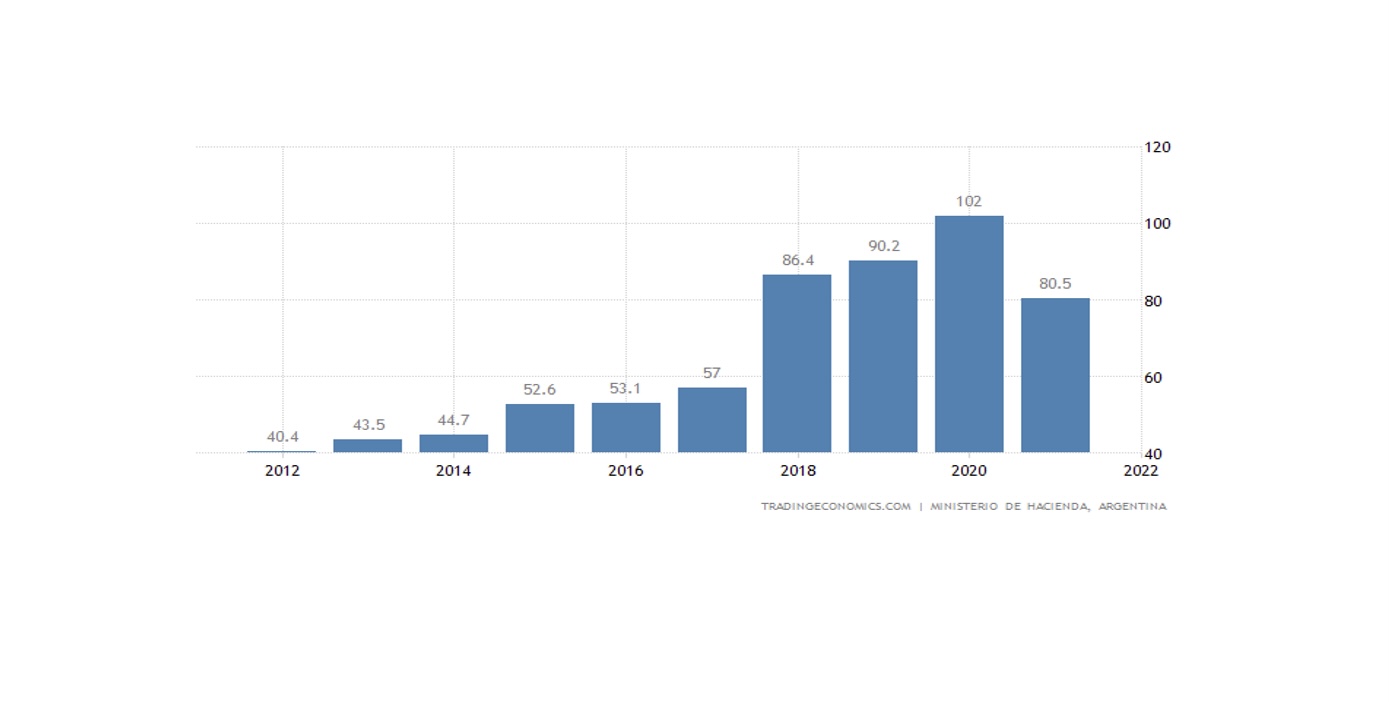 Moreover, these are just three economies; many countries like Ghana, Pakistan, Laos, Myanmar, Pakistan, Turkey, Zimbabwe, Zambia, Afghanistan, and others face similar crises. However, it is yet to be seen whether these nations would lead to similar political reconstruction or not.

But how did these economies reach this end?

There are mainly three factors behind it. Pandemic-induced deficit; every nation increased its government spending during the pandemic era for hospitals, health infrastructure, vaccines and economic stimulus. And at the same time, their revenue plunged. Nations like Sri Lanka and Turkey depend upon tourism for revenues and foreign currency influx, but during the pandemic, their income disappeared, resulting in the widening of the deficit.

The second factor lies at the heart of Stronger dollar forex. The Federal Reserve has been raising the interest rate to tackle global inflation in the post-pandemic world. And one direct impact of such monetary policy has been on the local currencies; since nations have to pay more to service their debt and import goods and services. And this has been one of the significant factors behind the drainage—of foreign reserves worldwide.

A similar incident occurred during the 1970s, famously known as Great Inflation. The federal reserves increased interest rates to counter the rising prices; however, it resulted in hiking the dollar value. The most affected group was the emerging economies, followed by Latin American nations' sinkage into foreign debt. However, Latin America and the entire world face a crisis this time.

And the third factor is Poor Leadership. In Sri Lanka, the leadership committed mistake after mistake. Lately, the Sri Lankan administration banned chemical fertilizers which led to the shrinkage of agricultural output; the administration slashed taxes which led to the shrinkage of government revenue. In El Salvador, President Faustin Archange made Bitcoin a legal tender, and since then, the bitcoin value has dropped by 48 %, leading to the enormous depletion in its economic growth.

Other factors are also making the situation worse, like Russia's invasion of Ukraine and economic sanctions on Russia. However, there seemed to be a quick way out, i.e. IMF bailout. But these nations require more than that. The countries must diversify their portfolio by reducing dependence on a single industry. The countries must be resilient. But most importantly, the countries must have good leadership.

2 weeks ago by Jaidev

The author provides an interesting take on the ongoing crisis.