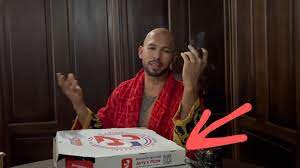 On December 29th, 2022, the hugely popular internet sensation Andrew Tate, and his brother Christian Tate were arrested by the Directorate for Investigating Organized Crime and Terrorism, or DIICOT. This is a major organization within the Romanian police. Their charges were rape and human trafficking. This arrest is, of course, due to the successful police work of the Romanian authorities. But in some parts, the arrest is due to some unforeseen circumstances and unexpected players. Namely, the environmental activist Greta Thunberg, A Romanian pizza chain, and most importantly; Andrew Tate’s hubris.

This somewhat ironic story existed and thrived almost entirely on the internet. It started with a Tweet from Tate at 4:58 Am on the 27th of December, 2 days before his arrest. His tweet was, for some reason, targeted at the young Swedish environmental activist Greta Thunberg. His tweet read, “Hello @GretaThunberg, I have 33 cars. My Bugatti has a w16 8.0L quad-turbo. My TWO Ferrari 812 competizione have 6.5L v12s. This is just the start. Please provide your email address so I can send a complete list of my car collection and their respective enormous emissions.”

The reasons why he decided to pick this fight are unclear, but Thunberg accepted the challenge. She responded: “yes, please do enlighten me. email me at [email protected].”

It’s not the strongest burn ever but beating a clout chaser like Tate doesn’t necessarily have to do with the quality of the burn. To fight people who turn any good or bad press into clout, one has to prove that said individual has less clout. Thunberg was successful in this. She outnumbered Tate’s 185.1 million views, 16k retweets, and 233k likes with a whopping 293.3 million views, 686.6k retweets, and a HUGE 3.9 million likes.

This substantial difference in impressions and likes between the two is what is called “ratio,” on Twitter and other social media platforms. This is a slang term most commonly used on social media, but it was popularized in a college setting. Specifically, it refers to the ratio of men to women in a group of college kids attempting to get into a college party. A group is more valuable and likely to get into a party when there are more girls in the group. A college party without girls is considered a “sausage fest” and of low value to college students. It’s an obviously misogynistic concept that objectifies women. This is precisely why it’s funny to use in a setting that doesn’t automatically seek to objectify women. Like, for example, social media.

In the case of Thunberg’s ratio of Tate, similar logic applies, but the players are different. Thunberg is like a college group with a good male-to-female ratio and Tate is like a bad one. The views of the tweet are the frat boy at the door. Of the 185.1 million viewers of Tate’s Tweet, 16 thousand of them retweeted it and 233 thousand liked it. That means about .00009% of the Tweets viewers retweeted it and .001% of the Tweets viewers liked the Tweet.

These numbers were easily ratioed by Greta’s. Of the 293.3 million views on her tweet were 386.3 thousand retweets and 3.9 million likes. This means that she had 16 times as many likes as Tate and 24 times as many retweets. It’s important to mention that her tweet did have an extra 108 million viewers than Tate’s. But even with that in consideration, her ratio was still far superior. One out of every one hundred of the tweet’s viewers liked it and .0001% of its viewers retweeted it. With this encounter, Thunberg proved she had a bigger audience and more Twitter clout than Tate.

Anybody but a media demon would take this loss and move on. But a media demon, especially one as big as Tate, is required to deny the loss and pretend it didn’t happen. His image is tied to his persona as a born winner that never loses. So, in instances like this, where he obviously got ratioed and lost the encounter, his only option is to deny the loss, blame it on something else entirely, or deflect to something else.

He goes with the deflection route this time. Shortly after this bout of bad press, he posted a video chiding Thunberg as a slave to “the matrix,” essentially labeling her as brainwashed. He waxed poetic about how everybody but his audience is brainwashed while smoking his signature cigar and wearing an expensive Versace robe. He tries to imply that Thunberg’s significantly larger audience is filled with brainwashed people.

This method would’ve likely worked to maintain his online reputation and continue his growth, were it not for the pizza box. He brought a pizza box into this video to try to trigger Thunberg. He implied that it wouldn’t be recycled, which is of course an environmental practice that Thunberg supports. This attempt at a comedic gag has caused Andrew and his brother Christian Tate a lot of grief in the week of the new year.

The pizza box was red with white text on the front of it that said, “Jerry’s Pizza.” Jerry’s Pizza is a local Romanian pie chain of 22 stores and is therefore a horrible pizza chain to feature on one’s wildly popular Twitter. By showing this pizza box Tate revealed to 66 million viewers that he was in the general area of one of the 22 Jerry’s Pizza locations. The Directorate for Investigating Organized Crime and Terrorism (DIICOT) claims that their raid of the house that Tate was in had nothing to do with the pizza box, but they also state that they were given his location by an anonymous source. Some commenters of the post claimed to be Romanian journalists on the night of the 28th, and said they were going to “alert the authorities.” These posts are certainly not conclusive evidence that Romanian authorities were tipped off because of people viewing the posts, but they are interesting considering the timing of the arrest just a few hours following said post.

In any case, Andrew Tate and his brother Christian Tate were arrested very shortly after this post. They were detained for thirty days and remain in jail right now. There are claims on social media, and in a surprising number of articles that Andrew and Christian are not actually in jail right now and have been released, but these are not true. They are likely an attempt from Tate’s alt-right media buddies to lessen the impact of the crime that he is accused of. But the crimes are far too serious for any chance of release any time soon.

Generally, they are rape and human trafficking. Specifically, they are internet pimping of sometimes underage girls using the “loverboy” method. The Netherlands government website defines the “loverboy” method of human trafficking as, “human traffickers who usually operate by trying to make young girls or boys fall in love with them… …Once they have victims under their influence they exploit them, for instance in the sex industry.” The raid and detainment of Andrew and Christian Tate were warranted because of the testimony of 6 girls who claimed to be victims of this Tate’s loverboy method. DIICOT released an official statement saying “The Tate’s recruited victims by making them believe they were interested in genuine relationships, then transported them to live in houses where they were under constant surveillance and forced to act in porn videos under threats of violence. The videos would then be sold online.”

This statement is based on evidence from their hard police work, but there was plenty of evidence that Andrew might have been committing these crimes outside of hard police work. Namely, his own statements. Beyond his misogynistic talking points, which only implied his hate of women, Tate often stated, verbatim, his hate or abuse of women. He once told the Newspaper The Daily Mirror that he and his brother: “operated a business in which 75 women were paid to talk to men for $4 per minute, and where the Tate’s would pocket most of the money.” He also said that he moved from the UK to Romania in the first place because “The rape laws are more lenient there.

The Tate’s are likely to be in jail for some time, which pretty much everybody outside of Andrews’s fanbase would say is a good thing. But who or what exactly do these critics of Rape, Trafficking, and Misogyny. Should they thank Greta Thunberg for rationing Tate so hard? Should they thank Jerry’s pizza for maybe revealing his location to DIICOT? Or should they thank Tate himself, for being so transparent about his crimes and misogynistic views? Was it truly due to these random circumstances that Tate found himself in jail, or was it his hubris that made it inevitable that he would be caught?