Around 2,000 Injected With Saltwater in the Name of COVID Vaccination in Mumbai 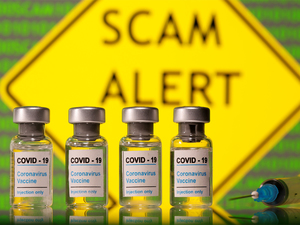 The police have claimed that around 2,000 people were given fake Covid-19 vaccines in Mumbai, Maharashtra. According to Mumbai Police, the 2,000 or so persons who thought they were being vaccinated, were instead given a saline solution, which is saltwater. The police also stated that seven FIRs, have been filed at various police stations across Mumbai, and ten people have been arrested considering the incident so far.

At the heart of the racket is Shivam Hospital, a private hospital provided with 17,100 Covishield doses and some Covaxin doses for administration.

A doctor couple from a private hospital, Dr. Shivraj Pataria and Neeta Pataria, and a woman who shared usernames and passwords for a CoWIN account to obtain vaccination certificates, are among those accused.

Mahendra Singh is said to be the mastermind and, Sanjay Gupta is an accomplice who oversaw the organization of these fake vaccination camps. In addition, an employee of the NESCO covid center and some from other hospitals have been identified for manipulating data and generating counterfeit certificates.

The joint commissioner of the Mumbai police law and order division, Vishwas Nangre Patil, said they discovered another eight such camps run by this syndicate. Most of the issues involved are common in all such fake campaigns, he added. These camps were organized in May and June. Scammers targeted residents of a high-end housing complex in one such case. The offender was caught in possession of a total of 12.4 lakh in cash that was "fraudulently obtained." In addition, the bank accounts of the two main accused—Manish Tripathi and Mahendra Singh—have been frozen. The accused in this case have been charged under Section 308 (attempt to commit culpable homicide not amounting to murder) of the Indian Penal Code (IPC).

After the Kandivali-based Hiranandani Heritage Residents Welfare Association (HHRWA) filed a complaint, the scam was busted. The society, which is seeking an investigation into the matter, claims it was duped by people claiming to represent a private hospital that was organizing a camp for the residents there.

On May 30, the society organized a vaccination camp. The doses cost ₹ 1260 per person. No certificates, however, were issued. When the members pursued the organizers for vaccination certificates, they were presented with certificates that had false data on them. The society members grew suspicious and registered a complaint.

According to some victims, vials of Covishield were made use of in the fake camp. The police said that the vials were from a Mumbai hospital. The manufacturer of Covishield, Serum Institute, has written to the city’s civic body, the Brihanmumbai Municipal Corporation (BMC), seeking assistance in tracking down the batch number of that shipment.

Ramesh Turani, a film producer, made a similar allegation. Turani said that he had organized an inoculation camp for 365 employees on May 30 and June 3, but none of them received their vaccination certificates.

Yet another case also emerged from Naupada district in Thane, where another counterfeit camp was held for 116 employees of an insurance firm. The victims were charged ₹1000 for the doses, Senior Inspector Anil Mangle of the Naupada station said. Furthermore, only 4 of them received vaccination certificates.

Addressing these events, the Bombay High Court on Tuesday instructed the BMC to investigate the contents of the vials used, assess the health of the victims, test their covid antibody levels, and administer proper vaccines to all of them. The court also asked the state and the BMC to release appropriate guidelines to prevent future incidents like these.

It has asked the government to carry out investigations and charge the accused under the provisions of the Epidemic Diseases Act.

Mumbai police have constituted a Special Investigation Team (SIT) headed by DCP Vishal Thakur to investigate the scam. The police have also asked citizens to come forward with any other similar incidents, especially those involving any of the accused arrested so far.

Similar reports of vaccine fraud have also emerged from Kolkata, where 500 people were given fake covid-19 vaccines. Of these, at least 250 were transgender people and people with disabilities.

The scam came to the fore when an actress-politician, Mimi Chakraborty, became suspicious of a vaccination camp and notified the police. The seized vials were found brandishing Covishield labels.

Concerning the Kolkata scam, the police have arrested a certain Debanjan Dev. He is said to have posed as a civil servant with a masters' degree in genetics and organized as many as eight dubious vaccination camps around the city.

Amidst rising vaccination rates in the aftermath of the devastating second wave, it seems some have seen this as an opportunity to profit off people’s fear, risking others’ lives for their gain. We need to be wary of such scammers. The discovery of fake vaccination camps in Mumbai and Kolkata shows that similar activities may be taking place in other parts of the country.

There are, however, a few steps that can help you avoid falling prey to these fraudsters or identify them.