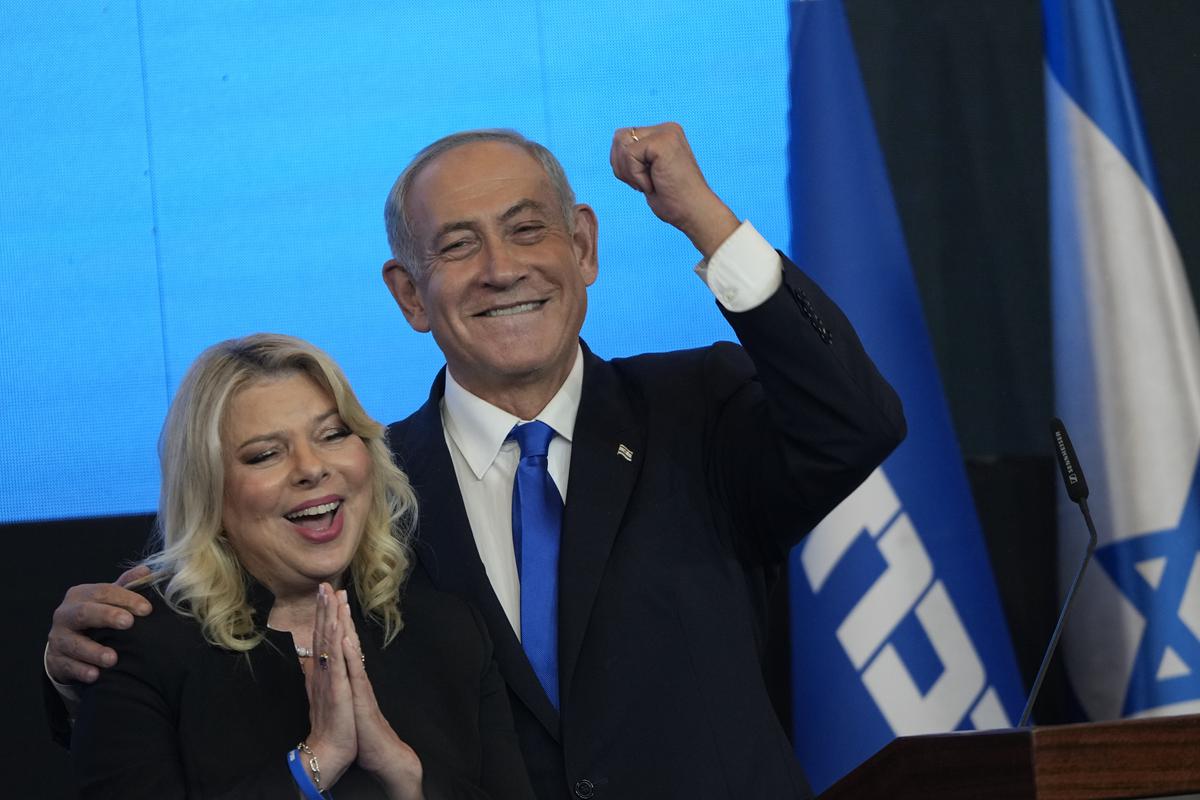 Israeli President Isaac Herzog declared on Friday that he is set to give former Prime Minister Benjamin Netanyahu the mandate to form a new Israeli government on Sunday. The President’s office released a statement that 64 of Israel’s 120 member Knesset recommended that Netanyahu assemble the new coalition, Aljazeera reported.

The Friday announcement by Herzog was made against the backdrop of the Knesset election results, which were announced last week and sets Netanyahu up for taking over the office this week. Netanyahu’s right-wing coalition won a comfortable majority with his Likud party amassing 32 seats, while its other major ally Religious Zionist alliance, won 14. The announcement by the President paves the way for a stable government with a clear mandate for Israel, something it hasn’t seen since 2019. The last four elections have been mere referendums on the legitimacy of Netanyahu’s rule, with him facing serious corruption and fraud charges.

However, apart from perceived stability, the right-wing alliance will bring a certain amount of extremist stances to the new Israeli government, which hasn’t been witnessed before. Though Netanyahu himself has always toed the line of religious ultra-nationalism, the religious elements have always remained carefully crafted. Indeed, occupation and rehabilitation of territories in the West Bank, as well as increased armed interference in Palestine have increased in the last couple of years. But agreements like the Abraham accords have also attempted normalization of relations with the Arab world. Thus, religious rhetoric has been toned down to accommodate international compulsions and flared up to rouse domestic sentiments.

But this time Netanyahu brings with him partners that propagate a far more unfiltered version of orthodox religious extremism. “These are difficult days,” said Aida Touma-Suleiman, a Palestinian lawmaker in the Israeli Parliament. “This isn’t the ordinary, classic right that we know. This is a change — in which a racist, violent right win”. Itamar Ben-Gvir has called for Palestinians “disloyal” to Israel to be expelled and is a former member of the banned Kach party, which is considered a “terrorist” organization in Israel. He also champions capital punishment and looser open-fire regulations for troops. He, along with Bezalel Smotrich, another major figure in the Religious Zionist party, are advocates of dismantling the Palestinian Authority. They are known supporters of the full annexation of the West Bank by Israel and are in favor of certain constitutional changes that curb the power of the judiciary.

Internationally the rise of right-wing extremism in Israel will pose a threat to Netanyahu’s own initiative of normalizing relations with the Arab nations. One of his headline acts of his previous term was signing the Abraham accords with UAE, which formed diplomatic relations with the Gulf state and created the bedrock for future cooperation. With Ben-Gvir and Smotrich’s stance on the West Bank and their support for allowing full freedom of prayer for Jews on the Temple Mount, the progress in Israel- UAE relations could be slowed down. “The momentum has been very fast forward so far — and that’s something you can’t sustain with this right-wing government in Israel,” Abdul Khaleq Abdulla, an influential academic in the U.A.E., said. “Including all these extremists in government is not looked on very favorably by the U.A.E.”

Israel has also attempted to normalize relations with Saudi Arabia, which is also likely to hit a roadblock with Netanyahu’s new political compulsions. “It is unlikely that there will be traction on the Saudi-Israeli diplomatic relationship,” said Elham Fakhro, a research fellow at the Center for Gulf Studies at Exeter University in England. In exchange for normalizing ties, Saudi Arabia “would expect something major in return,” she added. “Netanyahu’s approach — by definition — rejects the possibility of major concessions.”

Not just the gulf, but the new radical elements in Netanyahu’s coalition also complicate Israel’s relations with the USA, a long-term ally. After Lapid conceded defeat to Netanyahu, US State Department spokesman Ned Price stated cryptically that he hoped that the new government would “uphold the shared democratic values of the two countries.” “I suggest to listen to the voices coming out of Washington, in very low tones but are without any doubt very indicative of the American reaction to the new Israeli government and its policy about issues of high interest to the US,” Amos Gilead, a former top officer in the Israeli military, told Breaking Defense.

Moreover, Netanyahu has been overtly critical of the Washington-initiated maritime accord between Israel and Lebanon, which resolved the territorial dispute between the nations at the eastern edge of the Mediterranean Sea while Lapid was in charge. The accord created an agreement on the boundary lines for gas and oil development in the EEZ of Israel and Lebanon. The fact that Netanyahu is a known supporter of Donald Trump also puts him in the crosshairs of the Biden administration.

Netanyahu is entering unchartered territory, where he will have to manage the expectations of both his domestic allies and the international community. Neither can he allow Religious Zionists to use state power to ransack the minority Arab population and occupy West Bank, nor can he not give in to some of the orthodox demands of his allies. The expected victory of the Republican Party in both U.S houses might tilt America’s hand in his favor. But that doesn’t guarantee Israel the defense of the indefensible on the world forum.