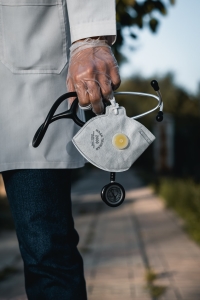 At times when the country's health infrastructure has crumbled down to its knees in face of the Covid-19's second wave, doctors have reached this unprecedented pinnacle of importance. Instead of showing gratitude to the service provided by these front line problems, they have been facing backlash for all the loss of lives that the country witnessed in the last couple of months.

People don't realize that these very doctors have been bearing the brunt putting their own lives at risk by showing up at the hospital everyday being available even at the wee hours of the morning to make sure yet another patient endures. And it’s actually the lack of ICU beds and oxygen cylinders that goes behind the exponential death rate.

It was recently that famous Ayurvedic Baba Ramdev had his share of the cake by calling out the modern allopathy that is the mainstream treatment adopted by the doctors in the fight against the corona virus and its many recurring variants. He called their practice “stupid and failed science". But he didn't stop at this as he later raised 25 questions on the efficacy of modern medicine. He not only questioned the effectiveness of the vaccines against the corona virus disease but also blamed the fatalities caused by Covid-19 on allopathy and how it is not proven 100% effective. This controversy was sparked when a video of the baba started making rounds on the internet

And in the light of this blatant defamation, The Federation of Resident Doctors' Association (FORDA) decided to stand up in solidarity by observing June 1 as a 'Black Day' to protest Ramdev's remarks against allopathic medicines and its practitioners. In response to the “derogatory and distasteful statements” made by the Yoga guru, FORDA aims for nationwide protests which will condemn his callous remarks "without hampering the patient care"

But trouble doesn't end for the baba here as The Indian Medical Association (IMA) had demanded that the central government take strict action against Ramdev. In a letter stating their stance, the body said, "CORONA warriors including doctor, nurses, ... media, teachers etc have all worked more than their abilities during the pandemic... Despite laying their lives in the lines of national duty, we are being subjected to insensitive, inhuman and insulting statements from Mr. Ram Kisan Yadav alias Ramdev. Not only this, he tried to derail GoI vaccination drive as his statement added to vaccine hesitance."

Along with this a complaint has been filed at the IP Estate Police Station which claimed that Ramdev has "willfully and deliberately spread false, baseless and malicious information" about the current treatment of Covid-19 patients by established medical practitioners and the approved methods and drugs used by them. And last but not the least, the apex medical body has also served a defamation notice on Ramdev demanding an apology from him within 15 days, failing to do so, he'll be asked for a compensation of the hefty amount of ₹1,000 crore.

However, it was on May 23 that Baba Ramdev himself withdrew his disparaging statements on allopathic medicine as an aftermath of receiving a strong-worded letter from Union Health Minister Dr Harsh Vardhan who branded his remarks as "inappropriate". Ramdev wrote his reply to the Union Health Minister in which he clearly defended himself. It said,"We do not oppose modern medical science and allopathy. We believe that allopathy has shown immense progress in surgery and the lifesaving system and served humanity. My statement has been quoted as part of a WhatsApp message that I was reading during a meeting of volunteers. I am sorry if it has hurt anyone's sentiment,"

However, as they say in Russia, "A spoken word is not a sparrow. Once it flies out, you can't catch it", the damage was already done and so countrywide, the doctors went ahead with their decision to mark 1st June as Black day. On the day, doctors in several hospitals wore black bands during office hours as a silent protest against the baba's remarks. Some of the doctors even wrote the words "black day" on their PPE kits.

In an another incident, a govt doctor fell victim to a brutal physical assault in anger of the demise of a patient he wasn't even taking care of in Assam's Hojai Covid Centre.Following which the IMA chief Dr. JA Jayalal has proposed that the "Central government should declare hospitals as 'protective zones' so that the safety and security of doctors is ensured."Such are the appalling challenges that our nation's doctors are facing apart from their expected "saving lives" duty.