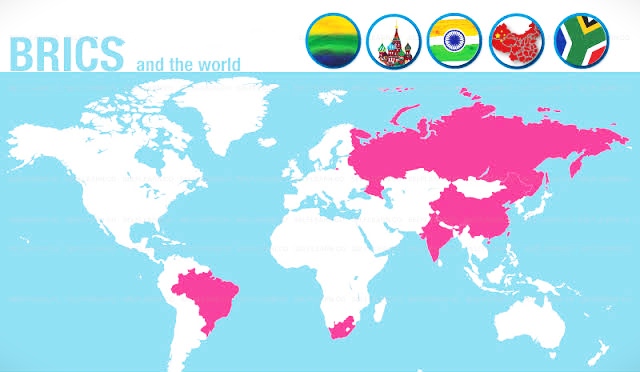 The 13th summit of the BRICS organization held on 9th September 2021 highlighted the steering role of its member nations in the post-COVID era leading to global recovery, implementations, and co-operation under the motto -'' Build-back Resiliently, Innovatively, Credibly and Sustainably''. It widened the lens of the group to environmental issues and an action plan on Counter-Terrorism. Let's have a closer look at the partnership of India and the BRICS association.

BRICS initially called BRIC-acronym for Brazil, Russia, India, and China, started its operation in 2006 as an association that favored a multipolar economy instead of following the US-Europe hegemonic global finance and governance pattern. BRIC expanded its reach and alliance to the continent of Africa by adding South Africa to its association in 2010. The association 'BRICS' finally created a U- connection between the northern and southern parts of the globe. The member countries together constitute 27% of the world's total land surface and 41.53% of the world's total population.

The principal aim of the organization is to support any government which is unable to ensure the safety of its population from crimes, war, human rights violations, etc. Thus, the association takes a step forth to follow its duty to ensure proper law, global order, and peace. It also is an active participant in social issues regarding poverty reduction, international inequalities, collective security, terrorism, and balance of foreign affairs. It promotes pluralism and strives to reduce the economic dependence on developed countries. The rapid growth of digitalization and globalization has helped BRICS in digital governance and sustainable development.

BRICS is the rising engine of global economic growth, and it promotes the interests of other countries like Afghanistan, Greece, Nigeria, Sudan, Pakistan, Bangladesh, Mexico, Iran, and many more.

BRICS summit is held once every year following a few objectives -

1] Distribution of mutual economic benefits among the members.

2] Non-interference in the internal policies of its member nations.

4] Co-operation among the member countries.

India and its fellow member nations are accomplishing the running development behaviors by increasing business-to-business (B2B), people-to-people (P2P), and government-to-government (G2G) relations. As a result of its best efforts, BRICS has successfully pursued its 'Millennium Development Goals and is striving for "Sustainable Development Goals -2030" with significant progress and credible developments. India's younger generation and accumulating Smart power development can boost its position in BRICS.

SWIRL OF GEOGRAPHY AND HUMAN RIGHTS

The U-Shape geographical existence of the BRICS nation has colonial/ semi-colonial histories. BRICS has boosted the desire to end the violation of human rights worldwide. It favors peaceful resolution of critical situations without using hard power and relegating the conflicts between participants following their "R2P - Responsibility to Protect".

BRICS has actively consulted to build capacity and exchange views on crucial global issues in various regional and national security arenas. It promotes systems to attain collective security and strategic strength globally. They have diligently countered cybercrimes and other terrorist activities through their CTWG (Counter-Terrorism Working Group).BRICS has played a prominent role in suppressing radicalization boosts and organizing the developmental policies of developing and under-developed countries. India within BRICS strategically contributes to the United Nations and its peace-keeping activities by providing defense training to its personnel. India has supplied more than 100,000 personnel to the United Nations' integral peace-keeping objectives making it the third-largest supplier of troops. By these means, India is pushing for higher positions in the United Nations Security Council (UNSC) and Nuclear Supplier Group (NSG).

The SGD-4 (Social Development Goal -4) of the United Nations emphasizes giving inclusive quality education to all. The BRICS nations have participated in cultural exchange programs, student exchange programs and have promoted exhibitions of global artworks. There have been several instances where music, cinema, paintings, literature, and many other art forms playing a pivotal part in wiping off the cultural divide. Tourism plays a critical role in fostering international relations. BRICS has successfully launched a ministerial mechanism on cultural collaboration in the year 2015.

India underlined the significance of collaboration in online knowledge exchange and the emerging necessity of digital development. India launched schemes like Incredible India, Atmanirbhar Bharat, and SWAYAM - MOOCs to promote the cultural & educational prospects of the country.

BRICS forms a political cum diplomatic entity with numerous objectives. Each BRICS nation enjoys a limited amount of power and follows the parsimonious theory leading to the integrated growth of the countries. In this way, BRICS marks its presence in the political framework of the world. India follows a tri-posing democratic-sovereign nature that supports the international community. The BRICS Parliamentarian Forum (BRICS PF) supports consultation among the member nations to present a mutual interest in the BRICS parliamentary meetings. The political partnership of BRICS and India aims to achieve the goal of united and equitable development. On the flip side, they are also competing with each other and with non-BRICS nations. BRICS welcomes opportunities for sharing policy advice and exchange practices in terms of regional challenges. They strive to bring a balance in global political architecture. The BRICS platform also provides India with an opportunity for multilateralism and smooth linkage with Russia, China, and the ASEAN nations.

The main objectives of BRICS included economic co-operation and expansion of its developmental trade. BRICS is on the road to constitute 50% of the total global GDP by 2030. India currently has a 14% share in the BRICS GDP. Globalization has flipped worldwide economic aspects provoking competition, and resulting in the faster economic growth of the world nations. The BRICS market has attained a liberal economy by implementing global governance, reducing trade barriers, and introducing uniform capital mobilization agreements. BRICS has taken a positive step in setting up the CRA (Contingent Reserve Arrangement) for its member nations. The CRA had played a massive role in the times of the BOP (Balance of Payment) crisis.

BRICS established the New Development Bank(NDB), which showed their readiness to shut off western dominance. They have implemented a lot of schemes for deepening economic co-operation and infrastructure between the nations.

Economic instabilities, disagreements between the BRICS members(regarding UN Security Council membership) have resulted in bad relationships between the member countries. The non-corresponding realities of the modern world, terrorism, lack of proper leadership, competition, and tension between the BRICS countries has become substantial roadblocks in their path to realizing the ultimate goal.

With experiences from the past, the following are the observable spaces where India can improve its role in BRICS-

1] India can support other nations and encourage the BRICS to join and solve the growing needs of the association.

2] India can bring up more effective reforms, including effective strategy for Electric Vehicles and Green /Smart City improvements that will make India a new hub for attracting the economy.

3]  Digitalization can boost India's march towards development. Schemes for spreading awareness about technology to all parts of the nation, especially among the older generation

4] India must keep on moving with amiable diplomacy and deploy new policies for rising as a globe-center and achieving faster development. The youth leaders and rising corporate generation can serve as a strong pillar of support.