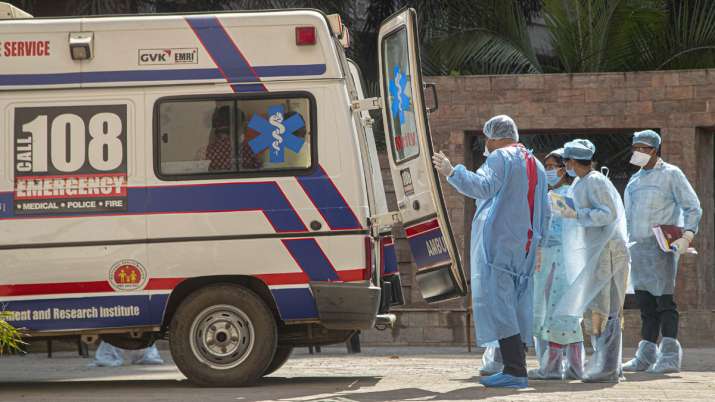 "Due to the absence of beds, oxygen, injections and ambulances in the hospital, the dam of patience is breaking so that they are not even hesitating to cross the limits of insensibility. One such incident embarrassed Lucknow's hospitality on Wednesday afternoon."

Lack of medical facilities and infrastructure in the second wave of the Corona pandemic has made the situation worse for the people of Uttar Pradesh because Uttar Pradesh is one of the states who is least affected during the first wave of coronavirus despite having a high population density. But now, everyone is panicking because today, Uttar Pradesh is one of the most affected states, and it is to believe that the government and their representatives are showing wrong data, either accidentally or deliberately, so that more cases will be less visible. Many people complained that bureaucrats did not pick up their phones. Some people found an opportunity to make money by selling injections and medicines in black at higher prices. People do not know what to do to save the lives of their loved ones. People have become enemies of the lives of others in an attempt to save their loved ones. One such case has come out from Lucknow. The non-COVID patient in a hospital in Balaganj failed to get oxygen supply in hospital, their relatives called an ambulance to take him to another hospital. When the ambulance was on the way, it was hijacked by the relatives of another serious patient. 'According to the theory of the survivial of the fittest, strongest one survives' totally failed in today's pandemic world. Even stronger ones are struggling to live irrespective of what kind of facilities they have gotten. The patient for whom the ambulance was abducted died on the way, and the patient who waited for the ambulance for going to another hospital also died due to lack of oxygen.

A NON-COVID patient Vinay Kumar, a resident of Balaganj, was undergoing treatment at Unique Hospital. Due to shortness of breath, the hospital failed to provide a proper oxygen facility. So, they advised the patient to shift to another hospital within two hours. On this, Vinay's relative Santosh called 108 for an ambulance. After so many attempts, their application was lodged, and the ambulance was informed to leave for the hospital. The ambulance driver informed the victim's family that the ambulance would reach the hospital within a few minutes.

Meanwhile, some people suddenly stopped the way of ambulance between the Lal Masjid and Petrol Pump on Campwell Road. The youths with bikes surrounded the ambulance from all sides. They snatched the key from the driver as soon as they stopped. After this, one of them immediately applied oxygen to his female patient and asked the driver to go to the hospital. The ambulance driver said that they took the woman first to Era Medical College and then to King George Medical College, but she was not admitted anywhere. By then, the oxygen in the ambulance cylinder was exhausted, and that woman who is another patient lost her life.

On the other hand, Vinay Kumar's family kept waiting for the ambulance like others, but they did not know what is written in their fate. The ambulance they are waiting for has been hijacked. After a long wait, Vinay's family called 108 again. After about 45 minutes, the second ambulance reached the hospital, but Vinay Kumar had died by then. Some people can criticize the family of that other patient by saying that they should not do it. Yes, they should be criticized that they are selfish that those people were just thinking about saving their family member's life. Is Vinay's life not crucial for his family? But there is also an aspect that they were forced to do because they had no other way. Their patience must also have been broken. That is why they did such a disgusting thing. If those people had not done this stupid thing, then perhaps one person's life could have been saved.

I do not know who is at fault in is this incident, those who hijacked that ambulance or this market who made a hype of cheap things like oxygen cylinders or the administration that has never thought about all these things, how to overcome the shortage of any medical facility even after one year? They have more than one year of preparation for all these things but did nothing. We feel irritated being called the 3rd world country, but now we must accept what we have done after independence. It is just like any other 3rd world country, whether it is a politics or a facility. Everyone is just like, we want a change, but we do not want to be a part of the change. We, the people of Uttar Pradesh, never voted for medical facilities and education. Perhaps that is why Uttar Pradesh is in such a bad condition.