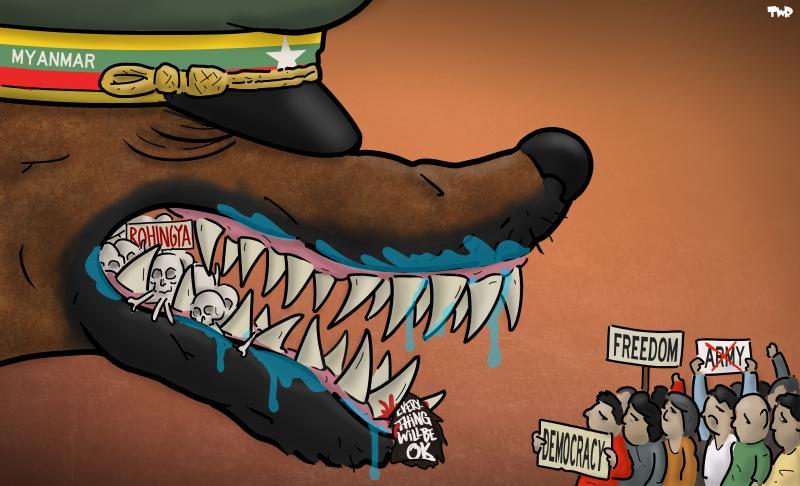 In the past seven months since the beginning of 2021, the military regime of Myanmar has committed countless abuses against people that constitute crimes against humanity. Millions of people around the country took to the streets since the military seizure. They peacefully demonstrated their restoration to an elected civilian administration. The security services have been shot and used excessive force to disperse and injure protestors on several occasions in a widespread onslaught on the masses.

Over a thousand people, including hundreds of children, were slain by the police and troops, a large number got missing, unknown numbers were tortured and raped under house arrest. Moreover, thousands of people were unlawfully imprisoned.

The junta injured the demonstrators, detained them, and even assaulted the doctors. Many health professionals had been early activists of the Opposition Movement for Civil Disobedience, refusing to work as a means of protest at public hospitals. Since the coup, over 300 health professionals were assaulted, and several died while attempting to give medical help. Assistance Association for Political Prisoners (AAPP) has claimed that 76 people continued to detain, and 600 physicians have an arrest warrant on them. Many went underground to escape arrest in fortunate mobile clinics.

The notion of crimes against humanity dates back to 1915. It was included in the International Military Tribunal Charter of 1945 that established Nuremberg proceedings against Nazi leaders. The Rome Statute of the ICC (International Criminal Court) refers to crimes against humanity in the form of a broad or systemic attack on all civilians. Many international organizations exclaimed the actions of the Burmese junta against individuals opposed to the military coup as a systemic onslaught on the people. The wide-ranging and often constant character of the reaction reflects government strategy, not individual security staff activities.

The Myanmar administration has retaliated with the killings, torture, and arbitrary imprisonment of individuals who wanted to meet only the results of last year's elections and have a government that reflects the desire of the people. Executive director of Human Rights Watch's Asia Division, Brad Adams, said, "It was enormous hostility from the people. Crimes against humanity should be accounted for by those guilty of these attacks upon the people."

Since February 2021, apparent humanitarian crimes include murder, enforced disappearances, torture, rape, and other sexual abuse, significant loss of freedom, and cruel actions that cause serious suffering. In 2012-2013 and 2017, the UN previously identified the crimes of the Myanmar military against the Rohingya as part of ethnic cleansing efforts. The authorities conduct crimes against apartheid humanity, persecution, and grave denial of freedom against Rohingya who live in the state of Rakhine.

The continued crimes against humanity in Myanmar are to be addressed by the UN, local agencies, and governments, including the EU, United States, and ASEAN. The international sanctions against the military and junta command of the State Administration Council under Sr. Gen. Min Hlaing are supplemented, strengthened, and coordinated. Targeted individual sanctions, a worldwide arms embargo, and financial limitations to diminish the junta's profits from extractive sectors would be included in the actions.

The Security Council and UN member nations need to put an end to the claim of the ASEAN's misuse by forcing the junta to reinstall democratically-elected civil government. ASEAN has not appointed a promised special envoy since its previous Summit meeting and has not made significant efforts to pressure the Board to address serious human rights issues in Myanmar.

Fear of vetoes of the Security Council, ASEAN's reckless leadership, and EU hesitancy to target foreign gas companies have hindered the international response to the crimes against humanity committed by the Myanmar Junta. Co-ordinated sanctions should be applied to pressure the Junta to cease its violent repression by the Security Council of the nations, including the United States, the EU, Australia, Japan, India, and Thailand.