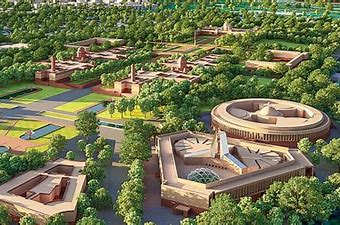 Amid a sudden surge in the covid cases and the numerous deaths reported every hour, the Central Vista project launched by Prime Minister Narendra Modi to build the new official quarters for the Government is now in action. And like every other project of the NDA government, this project has also been facing significant backlash.

The Central Vista Project was announced in September 2019 and is planned to be completed by the year 2024. The project includes the remodelling and redevelopment of Central Vista, India's central administrative area near Raisina Hill, New Delhi. The budget for the project can account for upto 200 bn rupees. The programme includes making new homes for the Vice President, house of the Prime Minister, multi-storeyed office blocks. This new parliament building will have 1272 members in the House of Parliament, of which 888 will be in Lok Sabha and 384 in Rajya Sabha.

With the development of the project in the past few months, there have been different rumours and confusions in people's minds if this project means demolishing the previous government buildings across the Rajpath. To answer this, the programme does not include the destruction of any heritage buildings, but only of less essential and non-heritage buildings built around the 1960s, knows as " Bhawan ".Due to the passage of time, these buildings have now become old and tarnished and can not function as a government office. The other facilities considered a heritage would cease to function as offices and changed to museums and other such places, open to the public.

The GovernmentGovernment addressing the press says, "The project will be a major boost to the economy".The project suddenly started to face difficulties, other than media and opposing parties backlash, when petitions were filed in the court on various grounds such as violation of statutory and municipal laws, environmental nods and destruction of public buildings. But the problems for the dream project of PM came to an end when Supreme Court gave the verdict in favour.

On January 5, 2021, Supreme Court, with a 2:1 ratio, gave clearance to the project, citing that there were "no infirmities" in any of the approvals granted for the project. Sanjeev Khanna was the only justice who voted against the verdict in the Bench of 3 justice. He said that the Heritage committee did not consider destroying such heritage structures against the New Delhi Development Act. After the decision, the Bench also made it clear in a statement that such decisions were not for them to be made. Still, for the executive and not bringing such cases, the apex of the judicial system can use its time in more critical constitutional instances for which the judicial system was made.

Though judicially the GovernmentGovernment won in its fight for the Project construction, it faced significant criticism from the opposing parties and people. Rahul Gandhi, the head of the opposing party, termed the project as " criminal wastage".Shiva Sena issued a statement saying," while smaller countries in the neighbourhood are offering help to India to tackle Covid19, Modi government is not even ready to stop the work of ambitious Central Vista Project.

Indian population took to social media after the foundation was laid on December 10, 2020, mocking this project as "Mungerilal ke haseen sapne" (referencing PM's plan to a popular show character). A group of scholars also wrote an open letter to the GovernmentGovernment criticising the project. It said it to be an extravagant waste of resources that could instead have been used to save lives.

The project may create a lot of revenue, labour and may even boost the economy, but the timing at which the project is taking place has made many questions about the working and planning of the Prime Minister. With so much ongoing criticism for various other acts and projects of the GovernmentGovernment, this particular project at a time of a grave crisis where people are dying in a large number has questioned the image of PM Modi's nationalist ideals. BBC even wrote an article about the project with the headline, "Central Vista: Does Indian PM Modi need a new house ". If the project is essential or not, it's a topic of another time but is it necessary to start this project now? The current condition of the pandemic stricken India very well answers the question.