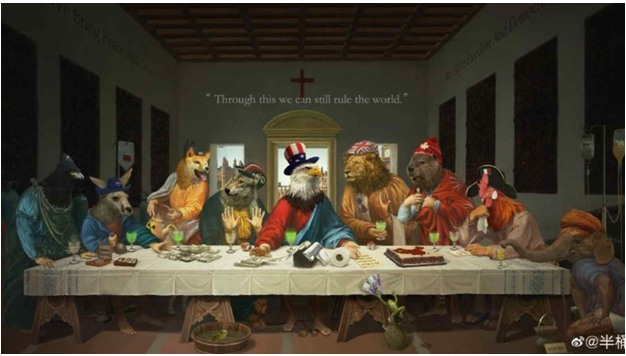 China founded a humorous way to counter charges leveled by G7 & NATO. China mocked India, Australia, Japan, the US & other NATO nations with their satirical cartoons, and, was not the only occasion when China did that. G7 & NATO recently had a meeting where they concluded and condemned China over human rights violations with Uighur Muslims in Xinjiang, Beijing’s aggressive military posture against Taiwan & other neighboring countries & some other controversial issues.

China in face of this critical criticism, stated, “the days when global decisions, were dictated by a small group of countries, are long gone.” And besides this, Chinese state-funded media highly promoted satirical cartoons depicting the G7 nations and named it “ The Last G7.”

The cartoon depicts animal-headed figures, with hats portraying their nationality via their respective flags.

Suggesting Leonardo da Vinci’s timeless artwork ‘The Last Supper,  The latest cartoon show, the G7 led by the USA in a huddle, plotting their next strategy against China.

China’s global opposition is the US, which was at the center of the table. About rising debts of US. The Bald eagle represents Washington settles with a printer, turning toilet paper into money, portraying the less value of $ of as compared to.

Japan is characterized as an Akita dog and is also seen holding a kettle and filling glasses on a table with radioactive water. Pointing out the Japanese decision to release wastewater from the nuclear plant at Fukushima Daiichi, this action was strongly opposed by China.

On the other side of the table, Beaver represents Canada, holding a doll in its hands. Chinese identifies this doll as Financial Officer of Huawei Technologies, MengWanzhou. Wanzhou is currently imprisoned in Canada, expecting her extradition to the US.

The G7 aren’t the only ones who hold their position at the table. Other countries at loggerheads with China, India, Australia, and also Taiwan found their place on the table. These animals have different gestures & expressions, implying that each state of G7 has an ax to grind on common conspiracies of suppressing China & upholding western hegemony.

A Kangaroo symbolizing Australia joins hands with the US to counter China. And on the other hand, it depends upon China as the largest trading partner.

A strategic partner of The USA in Indo – Pacific strategy & QUAD, China’s relations with Australia have hit a rough patch in recent months.

A frog symbolizing Taiwan is shown holding money in its arms, trying to reach the table in front of the US.

At the far end of the table sits an Elephant symbolizing India, the elephant shown sitting connected to the Oxygen canisters & cow’s urine. Direct reference to the Oxygen crisis India was dealing with during the II wave. And cow’s urine to show the superstition In India.

All over social media, China overran messages related to the first anniversary of the Galwan valley clash.

On June 15, 2020, armies of two nuclear-powered nation in Galwan valley is known as the deadliest border crises b/w two countries after decades.

Twenty Indian soldiers died, and China only admitted four casualties officially, that too after several months. Two countries have been locked in border conflict for more than one year now. 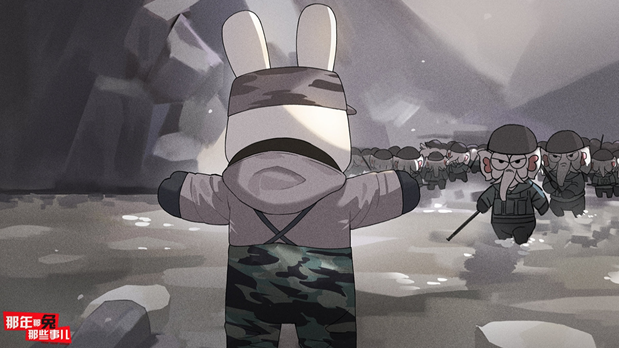 The Global Times ( A Chinese state-funded media platform ) reported that four Chinese soldiers who died in clashes were re-circulated.

In widely circulated photos & videos, Qi Fabio, the regimental commander from the People’s Liberation Army, Xinjiang Military command, is shown standing in the middle of the river trying to stop Indian soldiers.

The Chinese soldier was depicted as Panda, Stands strong with outstretched arms and without any visible weapons, while Indian soldiers were depicted as Elephants, trying to cross the river in mass numbers.

The Chinese State-owned media also accused India of reinforcing infrastructure on the border side with China. The same report quoted Chinese experts as stating that such measures were a ploy, from the Indian government to divert attention from their failure of managing corona in their country. 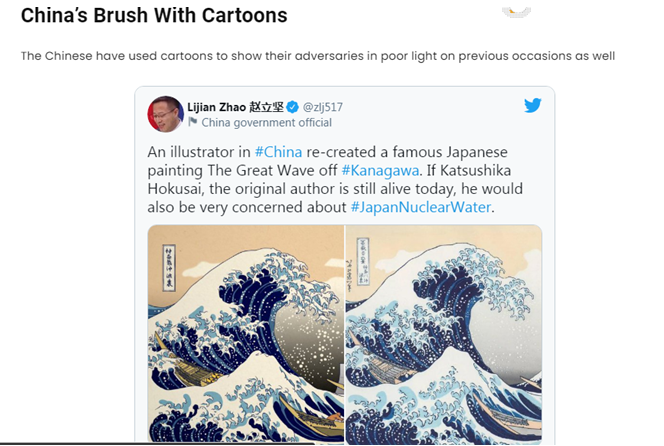 The Nikkei Asia report cited above mentioned that satirical illustrations of other countries by China have been circulating widely in China.

The spoke person of the Chinese ministry of external affairs tweeted a parody of Katsushika Hokusai’s ‘Under the Wave of Kanagawa’, in a reference, to Japan’s decision to release radioactive water from its defunct nuclear plant.

In April Chinese embassy in Japan had posted a cartoon featuring the Grim Reaper, Who was dressed in the American flag and carried a scythe depicting the flag of Israel. After an objection from Japan & Israel, the tweet was taken down.