Chowk flyover to be allowed for public in July end 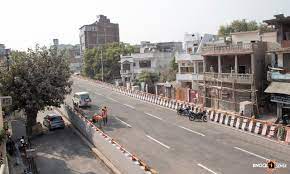 Chowk, one of the busiest and most visible Old City neighbourhoods, was riddled with potholes and terrible roadways. Locals claim that traffic jams were a frequent occurrence due to the high volume of traffic in the area and the poor state of the roads. Because the construction of the Chowk flyover was halted due to Archaeological Survey of India protests, the length beneath the flyover is in shambles. The Uttar Pradesh State Bridge Corporation was awaiting approval to finish the flyover and then restore the road. The flyover's construction began in 2019, and since then, there has been significant congestion on the road. Aside from the clogged highways, the building work has severely harmed the roads.

Near Chowk Stadium, the road quality deteriorates. The mix of bad roads, stray animal danger, and a lack of illumination along the route is a recipe for disastrous accidents. There have even been some horrible accidents there, according to witnesses. In an attempt to dodge a stray dog, a rider dislocated his shoulder. Another rider's bike slipped on the stretch owing to gravel.

The Chowk flyover, which is now under construction, will be completed by the end of July. During a visit to the city's current road infrastructure projects, officials from the Uttar Pradesh State Bridge Corporation (UPSBC) provided this information to the defense minister and Lucknow MP Rajnath Singh.

The 2.5-kilometer double-lane flyover, which will cost Rs 110 crore to construct, will connect PhoolMandi and Haiderganj trisections. Every day, it will facilitate the passage of about 50,000 commuters from Rajajipuram, Chowk, Aishbagh, and the surrounding districts. Tourists would be able to travel to BadaImambara in 10 minutes via Victoria Street and KGMU once it is operational.

Rajnath Singh laid the foundation stone for the Chowk flyover in September 2018. Singh also checked on the status of the Outer Ring Road, which is still under construction. He examined the 12-kilometer stretch between BakshiKaTalab and Gomtinagar. The segment is part of the 30-kilometer-long Outer Ring Road, which will link Sitapur Road to Hardoi Road and then to Mohan Road through the Agra-Lucknow expressway. According to Singh, the 20-kilometer stretch between Sitapur Road and Hardoi Road will be completed by February 2022.

In response to the city's excessive traffic, Rajnath Singh has already approved nine flyovers, with the Basmandi-Lalkuan, Rajajipuram, Kukrail, and Tedipulia projects now functioning. More flyovers will be built in the city soon to allow for a faster connection between the Engineering College and IIM-Lucknow as they bend toward Bithauli. In Khurammnagar, there will be another and both flyovers will be 2 kilometers long.