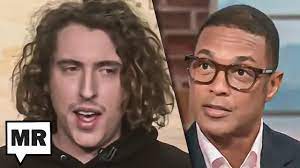 In a quick interview with the unorthodox journalist Andrew Callaghan, Don Lemon received minor pushback on the narrative he was attempting to portray. Lemon’s segment was about the trial of Enrique Tario, the leader of the far-right radical group The Proud Boys. Callaghan was invited to the show because he’d spent a lot of time around Tario and The Proud and even recorded them saying incriminating things for his new HBO show, This Place Rules! Lemon had some knowledge of who Callaghan was but not enough knowledge to know that he wouldn’t support the narrative Lemon wanted to portray.

CNN’s coverage of cultural issues tends to favor Democrat values. So, they typically vilify Donald Trump and any Trump-adjacent commentators and politicians. Callaghan is non-political but tends to lean towards more leftist-coded ideas. So, CNN expected that Callaghan would vilify Tario and embolden their position in this interview. But that angle is the exact troupe that Callaghan’s unorthodox journalistic style attempts to combat. So, for Callaghan, who was just on CNN because of the press it would give to his upcoming show, the ask was too much, and he pushed back against Lemon.

Lemon’s co-host asked Andrew, “what did you see in him as you were shooting this…” about Tario. Andrew responded, “Yeah, I just talked to him in the lead-up to the January 6th riot. Hung out with him a little in DC and Miami and elsewhere…” then ended his statement, specifically not addressing the presented topic to him. She responded: “what did you learn about him,” Andrew replied: “He sells uh… T-shirts. He’s, uh, the chairman of the proud boys.” Lemon then asks a more direct question, “So, no details about his involvement, his state of mind, or anything?” Andrew responded: “Ummm, I mean the movie’s not just about the capital riot, it’s also about like media echo chambers, you know what I mean. And like the dangers of the 24-hour news cycle and how mainstream media like Fox and even CNN compete for views by running constant 24-hour news cycles based on fear, division, outrage, and panic to like sell ads. So it’s not just about the capital riot.”

Lemon responds to this apparent strike and him and the company he works for by saying: “I disagree with what you’re saying, and I’m not exactly sure how that played into people going into the capital and rioting on January 6th. There’s nothing fake about CNN.” Andrew responded, “I’m not saying fake news; I’m saying ramping people up and increasing division during that period, just watching people fall down the rabbit hole and be pushed into action.”

This placid verbal jousting between Lemon and Callaghan goes on for another couple of minutes. The mood in the call is civil enough that no direct arguments break out, and Andrew gets a chance to plug the release date of his show. But the call wasn’t civil sufficient to run the entire length of time allotted to it; it ended early.

Although both Don Lemon and Andrew Callaghan are liberal media personalities, their stances on liberalism in media are different enough that there is an obvious tension in even the presentation of issues. And for a good reason, how ideologies are presented has everything to do with how they are consumed. If, for example, a divisive issue is presented severely and fearfully, its consumers might become more severely afraid of the subject. But if that issue is raised casually, the audience will likely take the news in stride and not dwell on it.

Don Lemon, under the broad umbrella of CNN, presents issues through that fearful, serious lens. At the same time, Andrew Callaghan offers even serious news with an air of nonchalance. This has to do with their respective audiences. CNN, like all the other major primetime news networks, markets to the coveted 25-54 money-making demographic. So essentially, early millennials and mid to late Gen Xers. Andrew Callaghan facilitates his content through YouTube and is therefore subject to a much younger market of late Millennials and Gen Zers.

Neither news shows are exclusive to serious or lighthearted content. Andrew has shown expertise in serious journalism in videos like O-block and Derek Chauvin Verdict on his current Channel 5 YouTube and Portland protests on his former channel All Gas No Breaks. Likewise, Lemon doesn’t only cover heavy politics. In his show CNN This Morning, they cover a wide range of topics like zoo news, good food, etc. But the facts are that Lemon typically sticks to political opinion news, and Callaghan seems more interested in presenting eccentric personalities and hot takes. Or in other words, the majority of Lemon’s news content has a direct spin, and the majority of Andrew’s news content doesn’t have an obvious spin on it.

But the lack of a spin is in and of itself a spin in this odd age of media. The real key to their difference in opinion on the topic of liberalism is these lines from the interview,

“I disagree with what you’re saying, and I’m not exactly sure how that played into people going into the capital and rioting on January 6th. There’s nothing fake about CNN.”

“I’m not saying fake news; I’m saying ramping people up and increasing division during that period, just watching people fall down the rabbit hole and be pushed into action.”

Lemon believes that CNN is essential news that helps combat the ideologies he disagrees with. Whereas Andrew believes that major primetime news agencies like CNN and MSNBC don’t resolve any of the issues they claim to fight for and, in fact, only seem to make things worse.

The Young Turks (TYT) segment with Ana Kasparian and Cenk Uygur reacts to this interview. Cenk and Kasparian take Andrews’s side in this conflict and expand even further on their interpretation of Andrews’s pushback meant. Kasparian says: “what sells in media? Remember, these for-profit media organizations want to get as much viewership as possible. And the way they do that is by drumming up drama….” Cenk continues with his opinion: “mainstream news is fake, it’s corporate news… …anything that is for change is radical! Different and wrong… …anything that is for keeping the system the same, the people at the top remain at the top, mainstream media will characterize it as very positive.”

This take characterizes Lemon as a pawn in the corporate media chess board and Callaghan as a shogi piece that somehow found its way onto this esoteric game of chess. It’s interesting, but it’s a take still more interested in the western board game than the eastern one. Likewise, it surely doesn’t capture Andrew’s perspective on issues that seem less interested in holding ground and more interested in finding new ground to stand on.

As Andrew Callaghan continues his mostly non-political content creation, people like myself continue to try and place his conversations with eccentric people into an understandable political box that’s easy to understand. Likely though, the political side of his news is more a consequence of him talking to a wide swath of different people than any overt intention to politicize on his part. His documentary, This Place Rules!, coming out on HBO max on December 30th will likely relay these sentiments and teach us new things about the large country of the United States.