Development of Prayagraj and Voter's mood 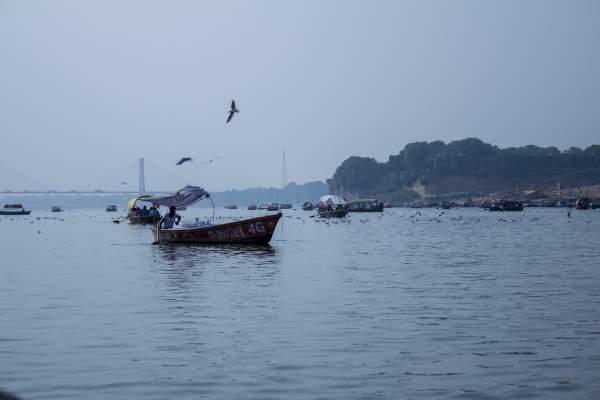 Prayagraj, also known as the Sangam city is one of the vital cities of Uttar Pradesh with both historical and religious relevance. The leading government in the state has not been ignorant of the fact and used it as an opportunity to transform the image, both of the city and the government itself. The yogi government has strategically planned the development of this city in various fields that gentrified the way people looked at Prayagraj.

Kumbh Mela is one of the biggest holy events that take place in India in specific cities, Prayagraj being one of them is the reason this city is noticeable not only in India but also across the globe. And BJP left no stone to make this city a treat to eyes to whoever set foot in.

Kumbh Mela is a religious event that gathers millions of people and the credit to attract such a large population goes to the immense advertisement done by the government. The 2019 Kumbh lead to the awareness of our culture and traditions to global tourists which was the successful result of such advertising strategies. Cleanliness, necessary facilities, and security was the biggest task for such a large population but the government handled it quite well resulting in Guinness book of world record for the largest traffic and crowd management plan and the biggest sanitation and waste disposal mechanism.

Infrastructure: a touch of culture

The government has undoubtedly worked towards the infrastructure of the city but not in the mainstream method, it has used the cultural and historical relevance of Prayagraj. Under the paint my city scheme numbers of artists were employed to showcase their talent, not on a canvas but buildings, flyovers, and crossroads. As a result, you can now see paintings inflicting our ancient culture and respect to our freedom fighters along with the social messages on nearly every road you step on.

This scheme not only changed the way Prayagraj looked but also marked a historical milestone by entering the Guinness world records for the biggest painting exercise of public sites.

Electricity always remains the top issue for any region and BJP has worked efficiently that it no longer remains an issue. The usual electricity cuts from 10 am to 1 pm are no longer in sight and the power remains undisturbedly available to the citizens. Blackouts due to weather problems or transformer maintenance and servicing are solved within a couple of hours unlike before.

Under the smart city project city has been gentrified in various fields and is still working towards development as the government announced several new projects. Prayagraj is all geared up for a public bike/bicycle sharing system with automatic locks. This system of transport is eco-friendly and would be available for both residents and tourists. Allowed to be used under city limits these bicycles would operate through an app using a unique identification code and the user would have to pay the rental fare.

Sangam city would soon flourish with up to 60,000 street lights that would switch on and off at the same moment. Under the prayagraj smart city project, all street lights installed on main roads, dividers, and flyovers of respective regions would be controlled by smart sensors and their monitoring system would be connected to integrated command and control center. This system would reduce the cost of thousands of units of electricity per day which usually goes wasted when these lights are not switched off during the daytime.

This Gandhi Jayanti the leading party paid tribute to the father of the nation’s vision of clean India. Union minister along with UP Deputy CM Keshav Prasad Maurya, UP Minister Upendra Tiwari, secretary of the department of sports Usha Sharma launched a one-month-long cleanliness drive on 2 October 2021 for the waste clean-up focused mainly on plastic. Prayagraj has been an important part of history and once again history is being created with the launch of the cleanliness drive which is expected to be one of the largest in the world.

This is not the first time when the cleanliness of the city is being carved. Since the BJP government came to power it has paid specific attention to the cleanliness of the state and the work here in Prayagraj is evident. A proper waste disposal system has been established, you can see bins both for dry waste and damp waste separately in nearly every locality. And this has improved the representation of this city before tourists.

Biometric attendance has been made compulsory for the teachers so that they make regular appearances at the institutions and teach according to the yearly plan of the term. Soon, the same attendance system is said to be introduced for students so that there is no more room for loose ends when it comes to education.

‘Nakal mafia’ was one of the major hurdles in the improvement of the education system that led to an increase in unskilled graduates and a setback for deserving candidates but since the Yogi government came to power, it has been shred apart and struggles to find a place in the educational ecosystem. The leading party has announced opening 50 new schools with proper technical facilities.

One of the major tourist sites in Prayagraj, Chandrasekhar Azad park also known as company garden now has inbuilt jogging tracks and exercising equipment which has now become a reason that people can now pay attention to their health and physique without costing much.

The state elections are to be expected to be held in February or March and with so little time left, the curiosity rises who will win? Well, according to the history of Uttar Pradesh it is highly unusual that the same chief minister has been elected twice after completing their term but this time the work done by the ruling government makes us believe in its win.

Uttar Pradesh is the most populated state of the country and it is often said the election result of this state foreshadows the Lok Sabha elections. For a party to remain at the center, it must find its grip in Uttar Pradesh because it has a population of over 200 million residents with 80 parliamentary seats.

According to the surveys and citizen’s reactions towards the work done by BJP, its win is highly anticipated. People are satisfied with the fact that they put their trust and their vote into a party that has changed the appearance and identification of the city they reside in with all the schemes and projects implemented by BJP for the development of the city Prayagraj.

It is never wise to assume until the actual results surface but this time the feedback of the voters cast an outline of how the elections would end up and who would win.