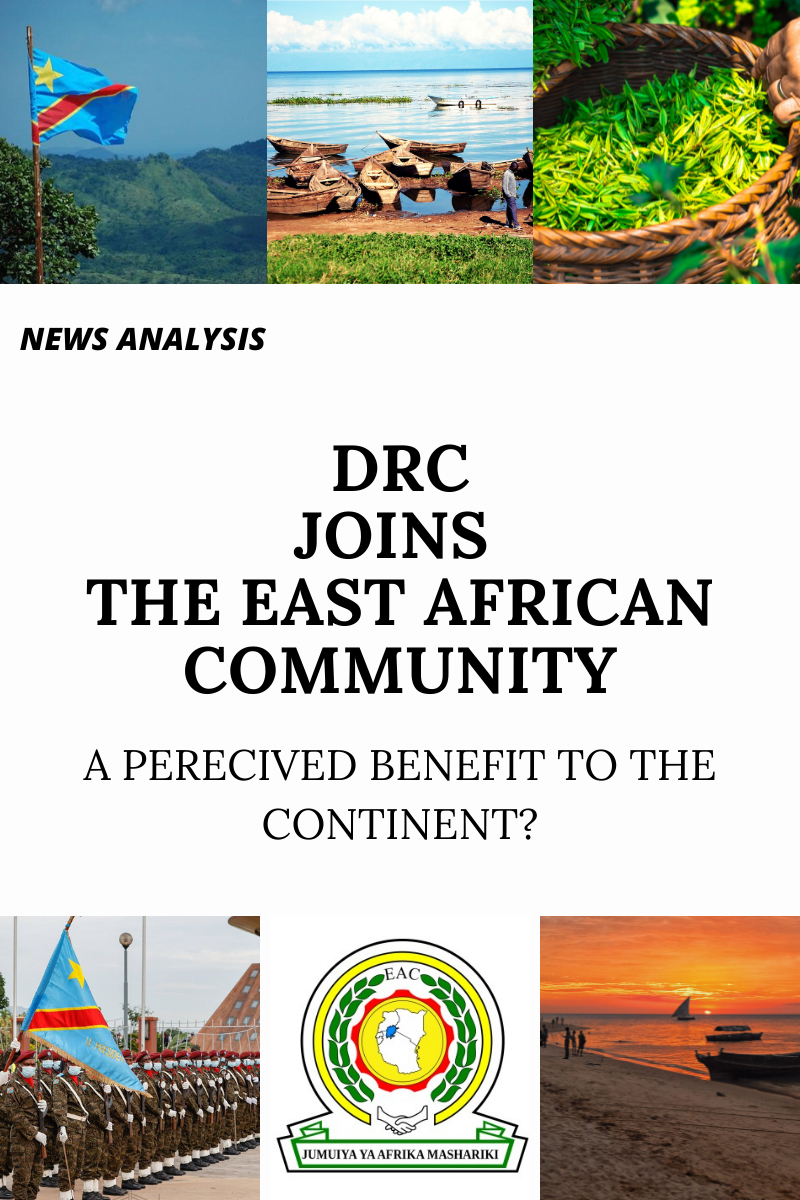 The 29th of March this year is expected to be one of the most crucial days in the history of the African continent and Eastern African Region. The Democratic Republic of Congo (DRC), the second-largest country in Africa is expected to formally join the East African Community, the regional bloc that has a six-member strong affiliation including Kenya, Tanzania, Uganda, Rwanda, Burundi as well as South Sudan. The move, which has been unanimously supported by the regional heads, is expected to be presided over by the President of Kenya, Uhuru Kenyatta, the current chair of the regional bloc. The country is set to benefit from a population of nearly 177 million people and a gross domestic product of US$ 193 billion. Projected to be one of the fastest-growing regions in Africa, the addition of the Central African country could see added benefits into the economy of the Eastern African region and the continent.

The Democratic Republic of Congo is home to nearly 90 million residents as of the year 2021. The country, regarded to be amongst the major mineral hubs of the world, has been plagued with political and socio-economic turmoil ever since it gained independence from the Belgians in the 20th Century. Due to various factors such as military interference, civil wars, as well as totalitarian governments, experienced over the decades, the country was not able to explore its full economic potential, despite its mass resources. However, after the change of regime from the former President Joseph Kabila who ruled the country for two decades to the current president Felix Tshisekedi, the country has ever since, begun to rebuild its footsteps, ranging from the reorganisation of the government culture and harmonising policies that enable the business to be conducted in the country. Among the crucial ambitions set out by the central African state was to join the ‘prestigious’ East African Community (EAC), an application that was made in 2019 after the entry of the new government.

Ever since its application, the state has been able to hold a series of talks with the East African Community members and further establish ties that mainly covered trade to facilitate its possibility of joining the regional bloc. Through these activities carried out by the state, the EAC member states gave the country a nod to join the organization, after satisfying all requirements as per Article 3 of the bloc that mainly revolves around the acceptance of the universal principles of good governance, geography as well as the potential economic contribution to the region.

Agriculture and minerals being the strongest export product of the DRC, accounted for nearly $14.3 billion during the year 2020, shows the role that the state could play in the region, as well as the benefits it could gain once it officially joins the regional bloc.

DRC: THE ADDED BENEFIT TO THE REGION?

The East Africa region is set to benefit from the lucrative yet untapped mining sector. The Congolese mining industry accounts for nearly 70% of global cobalt production. Also, being the third-largest diamond producer means that through some of the pillars of association that have enhanced trade in the region, such as the common market, the customs union which allows for the member states to access a free market along ensuring the movement of goods around the region with ease with relatively lower taxes as compared to other non-member states trading with the same countries, the region is set to benefit more.

The economic agenda, being the main focus for the EAC, presents new possibilities for the region with the entry of the DRC. As stated by Tanzania’s president, Samia Suluhu, more countries in the region will have an expanded market for their agricultural products. With the diverse demographic of Congo, it guarantees consistent access to the various regions within the country and vice versa and as a result, increased production volumes will be guaranteed for the member states, which is very critical for the building of the region’s economy. While Congo allows a majority of the member state’s visitors access to the country with a visa-on-arrival, with membership to the bloc, the country is expected to benefit from the visa-free policies enjoyed by the members and this shall enable millions of Congolese people to travel freely within the region, thus promoting unity and commerce in the region.

The security agenda also forms a crucial agenda, with the wake of terrorism experienced in the region, ranging from the Al Shabab at the horn of Africa to the Allied Democratic Forces in the North Eastern region of Congo, this shall enable Congo to benefit from the coordinated counter-terrorism strategies that have been applied by the bloc. With foreign militaries in the country such as Uganda, Rwanda, and the recently joined Kenya, the member states have continuously shown their commitment to peacekeeping in the region. With the new membership imminent, the DRC shall benefit further from these states.

Therefore, DRC joining the East African Community shall be considered a success by all. The deep socio-cultural connections the nation shares with the region, such as the Language of Swahili as well as their culture, is expected to guarantee a smooth integration of the country into the community and as the EAC continues to push for its four pillars of growth, the DRC’s vision directly connects with the needs of the regional bloc.