Dua Zehra: The Strange Case Of This 14-Year-Old Pakistani Girl 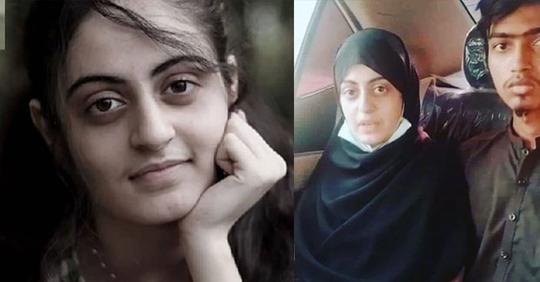 For the past 2 months, Pakistanis have been swamped with the uncommon case of Dua Zehra. The details of the case have shocked the whole nation.

It all started on April 16, 2022, when Syed Mehdi Ali Kazmi filed a missing person report, claiming that someone had taken his daughter. He told the police officials that his 14-year-old daughter had left the house at around 11 AM to throw away the trash, but when she didn’t return after a few minutes, the father assumed that she had gone to visit her grandmother. At around 1 PM the father decided to visit Dua’s grandmother’s house which was just around the corner of the street and was distraught after finding out that Dua had never visited her grandmother.

The worried family finally decided to file a missing person report at 5 PM, but the police were unable to start the search until 2 AM, due to a political rally. During this time, Dua’s father claimed that he had received 2 ransom calls.

After an extensive search and multiple mishaps of confusing other girls for Dua, on April 25, 2022, police finally found her 1,300 km away from her home. She was discovered in Lahore and married to a 21-year-old Zaheer Ahmed. Dua accused her father of lying and claimed that she was not 14 years old; she claimed to be 18 years old. She also told the police officials that she had left the house of her own will to marry Zaheer Ahmed.

Soon after, her father held a press conference claiming that his daughter had been forced to make this statement. The distraught father showed several documents, including a birth certificate and passport proving that Dua was in fact 14 years old. The very next day on April 26, 2022, the case was presented in court.

The Judge decided to deny the police’s request of placing Dua in a shelter home after listening to the alleged victim’s statement. The statement, which was recorded in the absence of her husband, heard Zehra say that she willingly made the journey from Karachi to Lahore and that, “I am safe, my life is not in danger.” In a shocking turn of events, Dua filed a case against her father and cousin, claiming that they had tried to attack her husband, she also claimed that she was being forced to marry her older cousin by her father.

Even after the court’s ruling that Dua was free to do whatever she wanted to, her father kept on trying to bring up the case in court and claimed that the marriage should be considered void since the legal age to get married in Punjab is 16 and, according to the official documents, Dua is hardly 14 years old. This time, the court ruled out that the marriage certificate produced by Dua and Zaheer was indeed fake, and the cleric was arrested.

On May 20, 2022, the “couple” was presented in front of the court, and Dua was sent to a shelter home where her medical tests were conducted. The medical tests showed that Dua was 16-17 years old. But on June 28. Another medical examination was conducted by an expert panel of 10 individuals under lawyer and activist Jibran Nasir. On July 4th, 2022, the panel discovered that Dua is closest to 15 years old.

During this time, Dua did an interview sponsored by a famous Pakistani brand called Jam-e-Shireen. In that “candid” interview Dua explained her journey from Karachi to Lahore and several other things, but almost everyone noticed the strangeness of the interview. To look older and bigger, Dua was made to sit on a bunch of pillows and sheets. Strangely, she kept repeating the same statements again and again. Keen viewers were also able to point out the shadows of multiple individuals behind Dua. Viewers also found the interviewer’s directions to Dua very strange.

The case didn’t end with the court’s ruling; instead, the famous Pakistani activist Iqrar-ul-Hasan came forward with his research and claimed that Dua had in fact been kidnapped. Iqrar-ul-Hassan has worked on similar cases before and “knows a lot of people like Zaheer who trap girls like Dua Zehra.” He claimed that due to the case’s publicity, his gang was not able to sell Dua into prostitution, but as soon as the uproar dies down, they will do it. Iqrar-ul-Hasan has claimed that he will do everything in his power to save Dua.