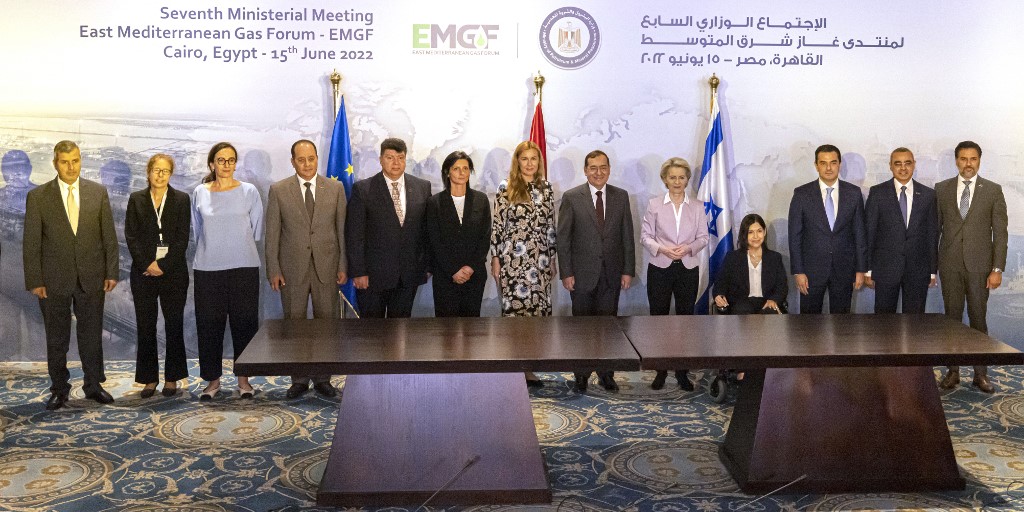 Considering the conflict between Russia & Ukraine, the European Union sought to find a better alternative for natural gas exports. Russia was responsible for supplying 40% of the EU's natural gas, holding great power over the European nations. And as the conflict began spreading, sides began to be taken and Russia cut off its natural gas supply to Poland, Bulgaria, Finland, and Dutch & Danish companies.; Forcing them to search for other solutions to stop depending on Russia. “We want to diversify to trusted suppliers and Egypt is a trustworthy partner,” EU Commission President Ursula von der Leyen said at a joint press conference alongside President Abdel Fattah El Sisi.

On Wednesday, June 15, the Memorandum of understanding was signed by the Israels' energy prime minister, Karine El Harar, Egyptian minister of petroleum, Tarek El Molla, and the EU’s energy commission, Kardi Simons during the ministry meeting of the East Mediterranean Gas Forum (EMGF) in Cairo. The MOU is a 9-year agreement that runs for three years and is automatically renewed for another 2-to 3 years.  It states that the three sides “will endeavor to work collectively towards enabling a stable delivery of natural gas to the EU that is consistent with long-term decarbonization objectives and is based on the principle of market-oriented pricing”.

The agreement is an important step to boost the relations EU in the East Mediterranean region between Egypt, Israel, and the EU, including a provision encouraging European firms to participate in tenders and invest in natural gas exploration and production projects in both Israel and Egypt.  Israel already transfers gas from an offshore field to Egypt, where it is liquefied and delivered to European countries, under a historic $15 billion deal signed in 2020. Officials expect LNG shipments from Egypt to Europe to increase because of the agreement, however, they expect it will take a few years before exports can be significantly increased.

Tarek El-Molla, Egypt's Minister of Petroleum and Mineral Resources, said the agreement is a significant step in improving relations between Egypt, Israel, and the EU, as well as fostering engagement among East-Med members and partners. East-Med is an international organization located in Cairo that was founded in 2019 by Egypt, Palestine, Jordan, Greece, Cyprus, Italy, France, and Israel.

Natural gas will play a key role in the EU's energy market until 2030, according to the deal. Following that, natural gas usage is predicted to fall to meet the country's goal of having a zero-emission economy by 2050.

Egypt is striving to establish itself as a regional energy hub after reaching natural gas self-sufficiency in 2018. This is being done by improving regional collaboration and making many gas discoveries. Egypt's liquified natural gas export sales increased to 3.9 billion dollars in 2021, up from 600 million dollars the previous year.

Egypt announced in November 2021 that it had inked an agreement with Israel to expand natural gas supplies from Israel to Egypt for re-export.