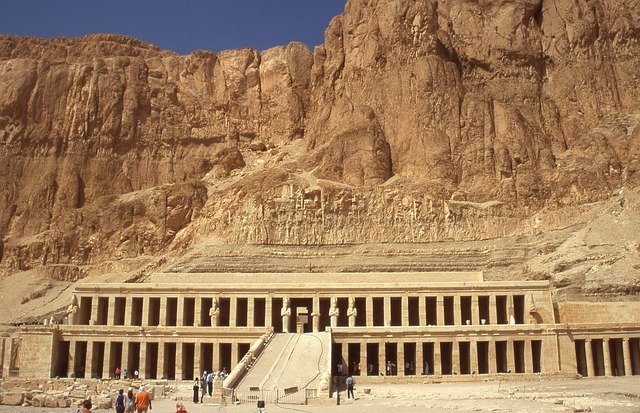 I was a kid playing in front of the television when I first heard this name. A film named "Gram in Karnak" was shown and a lyrical and dancing show. I can still recollect it. "Hatshepsut, Hatshepsut, they locked you up, beautiful in the coffin," sang the song.

Then, in the background, scenes from Hatshepsut's Great Temple appeared. I believe I fell in love with Hatshepsut when I was just seven years old.

Years pass as I study Egyptian history, and the old dream keeps popping up in front of my eyes, the song still ringing in my ears. And it is her temple that has got to enchant my mind.

Cleopatra may be obvious to everyone. Her popularity spans the globe, but Hatshepsut is a queen whom neither history nor the media have given credit. I'll tell you a little bit about her right now.

Her life: Hatshepsut was a famous Egyptian queen (meaning the Lady of the Beautiful). Hatshepsut, born in 1508 BC, was schooled in the sciences of ethics and proper behavior, reading, writing, arithmetic, philosophy, religious rituals, grammar, and construction.

Hatshepsut married her illegitimate brother Tuthmosis II at the age of twelve; Tuthmosis II died young, leaving her a widow at 27. Tuthmosis II also had a son from another wife besides Hatshepsut named (Thutmose III) after the king's death; one of them had to take over the rule in Egypt. Due to the young age of (Thutmose III), Hatshepsut took control of the country's affairs in his name for eight or nine years before eliminating him from authority.

Since religious teachings in Ancient Egypt forbade a woman from performing the duty of a king, Hatshepsut attempted to resemble the pharaoh. To strengthen the legitimacy of her authority, we find her altering her name from Hatshepsut to Hatshepsu, as she used to wear male garments and a false beard.

Hatshepsut also used the masculine pronoun and held the duplicate titles as men, even though she never hid her gender in her inscriptions. She frequently used the feminine sign, as we see her wearing a long dress in one of the temple inscriptions. Hatshepsut may have just desired to create an external image, in my opinion, to gain strength and prestige.

Queen Hatshepsut was able to prove her worth as the country's ruler. Her loyal staff was led by (Senmut), the first man and responsible for all the royal facilities in (Thebes), as her great temple was built for her. In Deir el-Bahari and Karnak, she constructed an obelisk.

Hatshepsut is the Egyptian pharaoh who ruled the longest. The Egyptian economy and foreign trade flourished during her reign. Hatshepsut's era was also marked by peace and prosperity, with the army's strength, construction activities, and large-scale marine missions sent to trade with surrounding kingdoms. With South Sudan, Ethiopia, and Eritrea, foreign relations have taken a gigantic leap onward.

Aside from the construction and maintenance of several buildings, memorials, and temples

Cleaning of a link channel between the Nile Delta and the Red Sea, which was established in the Middle Kingdom, and rework in copper mines in North Sinai.

Her death: Queen Hatshepsut died in 1458 BC, 22 years after becoming pharaoh. Hatshepsut's death, however, remained a secret. Although she is assumed to have died of bone cancer, a scan of her mummy revealed that she also had diabetes and arthritis. After she died, Hatshepsut was buried in the Valley of the Kings, on the hills behind Deir el-Bahari. The legend of Queen Hatshepsut era came to an end but left a period of renaissance and tranquility that ancient Egypt had never seen before