Health Index Data Released for Round 4, Uttar Pradesh at the bottom of the list

New Delhi: The National Institution for Transforming India (NITI Aayog) publishes this index commissioned by the Union Ministry of Health and Family Welfare, the World Bank, and the NITI (National Institution for Transforming India) Aayog. It is an annual health index that tracks the performance of the states and union territories based on 20 health indicators. It is a mechanism that shows the incremental performance, that is, the year to year progress/ regress of the covered States/UTs. Presently, there have been four rounds of publishing this data, including the most recent one. In the Health Survey, 2018-19 has been considered the Base Year, and 2019- 20, the Reference Year. Key Takeaways: The states to have scored well are Kerala, Tamil Nadu, and Telangana, while the BJP-led Uttar Pradesh remains at the bottom of the list with no improvement in many key parameters. The health-related parameters suggest that Mizoram topped the list of smaller states, while Arunachal Pradesh and Manipur bagged the lowest position. The data reveals that Assam has shown the most improvement. Among Union Territories, Dadra and Nagar Haveli have performed well on the indicators, followed by Daman and Diu. Andaman and Nicobar Islands have ranked lowest among the UTs. The Executive Summary of the report suggests that the “gap in the Overall Performance between the best, and the poorest performing bigger states and UTs closed, while it expanded for the smaller states. The analysis also showed a negative correlation between the States’ scorecard of the Health Survey and the recently released Multidimensional Poverty Index. 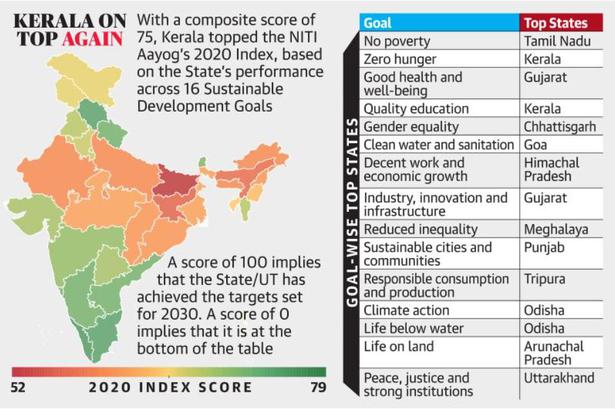 Kerala has performed best in the Overall Performance category for the fourth time in a row. Delhi and Jammu & Kashmir were among the worst-performing UTs in terms of Overall Performance, but they were the best in terms of Incremental Performance. The survey indicated that the health index score improved in 14 of 19 bigger states, four of eight smaller states, and five of seven Union Territories between 2019 and 2010, relative to the base year.

Some health amenities need serious administrative attention: Many larger states have shown a shortage of expert medical services in the district hospitals. LaQshya (Labor Room Quality Improvement Initiative) certification for many district hospitals for the labour room and maternity OT were much below requirement. Moreover, many of the states have reduced their expenditure on health. The Health Index is a valuable instrument for measuring and comparing overall and incremental performance among states and UTs across time and urging states and UTs to move the focus away from inputs and outputs and toward outcomes.