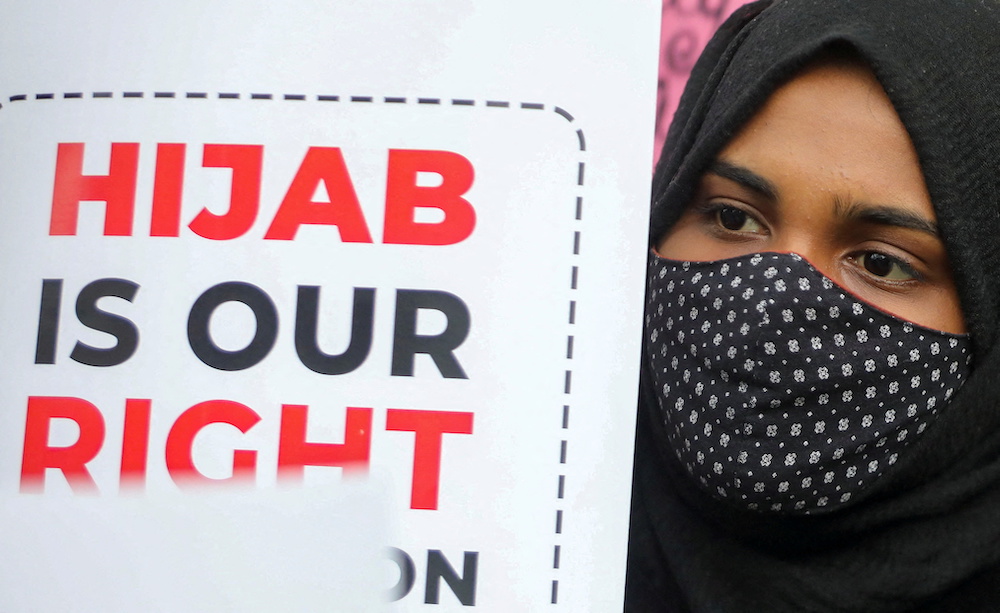 On January 22, six students from a government-run women’s college in Udupi of Karnataka alleged that they had been barred from classes for weeks because they were wearing a hijab. Usually, the college uniform for girls is a loose tunic with pants and a shawl. “When we arrived at the door of the classroom, the teacher said we cannot enter with the hijab, and she asked us to remove it,”- Almas told Al Jazeera. Since the hijab is not part of the uniform, wearing a hijab violates the rules according to the college administration. The girls have been marked absent since December 31, even though they go to college every day.

A photograph of students wearing hijab and college uniforms sitting on the steps outside their class has gone viral. The college administration, disturbed by the protests, forced the students to write a letter claiming that they stayed home and missed classes deliberately. “We tried to refuse, but the principal and the teachers threatened us that they would ruin our careers,” Muskan Zainab told Al Jazeera. The girls also said their non-Muslim friends and teachers turned hostile towards them after receiving more comprehensive attention. The students were also subjected to online harassment.

Udupi is one of the three districts in Karnataka, a communally sensitive coastal belt. The district has been described as a laboratory for majoritarian Hindu Politics. Recently there has been a sudden rise in hate speech and vigilantism against Muslims. These incidents have created deep religious faultiness, which created vocal minority-led groups to assert their right to religious freedom.

Karnataka CM and Education Department have issued guidelines for Uniform Dress Codes in schools and colleges amid the Hijab controversy taking place in the state. “All the government schools should follow the uniform dress code, declared by the state government. Students from private institutions should follow the dress decided by the school management.” The ban, later on, spread to other parts of the state as well. “Colleges that are under the Department of Pre-University, state government to follow the dress which was decided by the college’s development board (CDC). If there is no such dress code, students can wear the dress which will not affect equality, integrity and law and order” – the department further added.

Siddaramaiah, the opposition leader from the Congress party, has stated that the government has not made uniform mandatory at pre-university levels. The Karnataka Congress has demanded the removal of the principal of Kundapur Pre-University College of the state’ for denying entry to those who wore hijab. “An MLA Raghupathi Bhat has told the college management it seems to make uniform compulsory. Who is this fellow to make it compulsory? Besides, it is a government college. This principal, who gets his salary from the state exchequer, stands at the entrance and closes the gate at the behest of BJP MLA. The principal of the college should be removed,” Siddaramaiah said.

On Monday, protest events were held at different locations of Karnataka by Muslim women. The protest by hundreds of hijab-wearing women, including university students and homemakers, demanded their constitutional rights. One of the activists said that their struggle is “to protect our sister’s education, our dignity, our religious freedom, and our country’s constitution.” The protest locations include Bengaluru, Mysuru, Hassan, Kolar, Shahapur, Shivamogga, and Udupi. Headscarves worn by Muslim students have been an issue across the state for a few days. As a protest to the presence of Muslim female students in hijabs, several Hindu students started wearing saffron shawls, which are not usually worn.

Muslim students were seated separately at Sri Sharada College at Basrur in Udupi. On Monday, the principal of Dr.B.B. Hedge First Grade College in Udupi, Professor K. Umesh Shetty, said, “no student came to college with a headscarf.” Commenting on the hijab, he said, “we’re going as per the order of the state government as well as the management.” He also added that “female students are not supposed to wear the headscarves inside the class.”

Home minister Aaraga Jnanendra on Monday said that “I have directed police to discover who is behind this development.” The Karnataka high court is scheduled to hear a writ petition on Tuesday filed by a Muslim student who argues that wearing a hijab is her fundamental right guaranteed under Articles 14 and 25 of the constitution. Several opposition parties, including Congress, Trinamool Congress, RJD, NCP, Left parties, and the BSP, extended their support to Muslim female students.

A Muslim girl student who was restricted to attend the class for wearing hijab in Kundapur said that “we are not here for staging any protest or agitation, we are only demanding our right. Hijab is our right. We are only asking you to let us attend the classes with it as we had earlier. If we are suddenly asked to remove our hijab, how can we do it”. On the other side, a male student at a Udupi college said, “if hijab is allowed, then the uniform dress code has to be removed, there can’t be one rule for them (Muslims) and one rule for us (Hindus). If there is a uniform, it should be the same for everyone,”-he said.

Amidst the issue, the Karnataka government on Tuesday announced that all high schools and colleges in the state would remain shut for three days between February 9 and February 11. “I appeal to all the students, teachers and management of schools and colleges as well as people of Karnataka to maintain peace and harmony,”- Chief Minister Basavaraj Bommai tweeted.

The issue is being discussed widely on various social media platforms as well. The campaign ‘Join If You Support and Stand with Hijab’ is trending. Several activists and social media influencers have taken up the protest. Hijab- like any other garment, is a part of the culture of the Muslim community. A small piece of fabric cannot signify judgmental assumptions about an individual’s background, choices, and faith. There are many Muslims who do not wear a hijab as well. Hijab is a choice. The world’s largest democracy must accept and respect the choices of its citizens.