Imran Khan Is Aiming For Real Independence, What Is It? 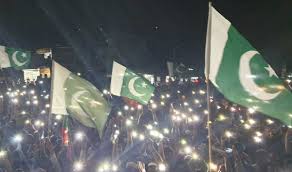 It would have been simple to answer if it's just about freedom of speech or media but it seems Mr. Khan has taken on a grueling task this time; seeking real independence. What Khan is struggling for, is controversial yet, some say it’s nothing to do with the country, some say it is all for gaining the power again, and some say it is the new beginnings of freedom from mental slavery, freedom from the pseudo-democratic system.

Before getting into the depth of Khan’s real independence, first, let’s figure out why are these fumes of independence rising in the country. It has all started right after the toppling of Khan’s government and his narrative of foreign conspiracy behind regime change. Imran has put forward the strong contention of foreign intervention and influence that is responsible for the turmoil in the country.

Is his stance have roots or is it just a mere political stunt? If we look at the history of a country, there exist footprints of foreign interventions. let's flashback to the 1970s when Zulfiqar Ali Bhutto worked for independent foreign policy and criticized the US for its interference in Pakistan but later he got hanged in the era of dictator Zia-ul-Haq and his death brought many controversies but hearsay of his judiciary murder by the US intervention was widely accepted among people.

Then, there are undercover stories that wrote about how and why the US tried to stop the nuclear program in Pakistan and threatened Pakistan with sanctions. Dragging Pakistan into the war on terror also shows US influence on Pakistan’s power holding class. General Musharraf told that after 9/11 Americans threatened him to be bombed back to the Stone Age if would not become an ally against the war on terror in Afghanistan after which Musharraf officially jumped in the orbit.

War on terror proved worst for Pakistan, Pakistan has given thousands of lives in it and has compromised the reputation and self-respect of the country across the globe. During that period the US used Pakistan for its operations in Afghanistan and even in Pakistan too. Alliance of so many years has settled the roots of the US in Pakistan and perhaps these roots have invaded beyond the limits. All these happenings and events over the years somehow provide evidence of US-backed minds in the country.

Imran Khan after his ouster has claimed many times that the American administration was not happy with his trip to Russia which made them topple his government. He also questioned that if he was a prime minister then who US undersecretary was addressing in the official cipher. If we believe this to be true, then the question arises as to whose help the United States wanted in overthrowing the country's chief executive and why?

In answer to these questions, the majority of the public has a consensus that the establishment has played role in this regime change and cipher was addressing them. Because of this, the country’s military leadership is facing extreme criticism probably for the first time in history. In answering unanswered questions public becomes polarized and points toward the controversial role of the military in politics which has already been denied by the spoke person military. But in history, we find the footprints of the military in the political system of Pakistan and its long-term effect.

Imran Khan not only criticized military leadership but political opponents for bringing the US-backed regime. Khan said Sharifs and Zardari have a history of bowing down in front of the US. Imran Khan has alleged them of never condemning US drone attacks on the country and getting aid in return.

Now, Imran Khan has demanded fresh elections by initiating a real independence campaign. He said that he would not accept this imported government by US-backed regime change as it would mean that we as a nation accepted the US instruction. He also claimed that this is the fragility of our systems that bowed down to the US and got pressure to change the regime.

In the dictionary, independence means freedom of being governed or ruled by another country, and real independence means not making decisions under the influence of external forces but rather based on your own mindset in favor of your interest.

When Imran khan talks about real independence, he refers it to as becoming free of fear of death, loss of job, and poverty that can affect the decision-making ability. He emphasized that as a nation freedom is being independent of mental slavery and worldly fears. In his opinion, the country system has been run under slave minds and foreign puppets. He not only questioned the military role but the credibility of the judiciary because of the delayed justice in corruption cases of elites. He has been emphasizing the independence against status quo since the start of his political career.

Secondly, Imran khan has serious objections over the US interference in the foreign policy of Pakistan’s government. In the past few happenings, his role in the withdrawal of US forces from Afghanistan, OIC conferences in Pakistan, his visit to Russia, denied condemning Russia over the Ukraine matter by replying fearlessly to European Union, denied giving bases to the US, and top of all, high engagements with china have given the impression of new regional orbit that possibly made the US unhappy with him.

In Imran khan’s journey from cricket to politics he got into countless predicaments and every time, he came out as a champion, as a man of crisis. But this time Khan has plunged into the most challenging goal of his life. This time, it is not just about the status quo but the institutions of the country that holds more power than democrats and has been influencing the democratic functioning in the country for years. Time will prove if he will become the phoenix from ashes or be carried away by the storm.