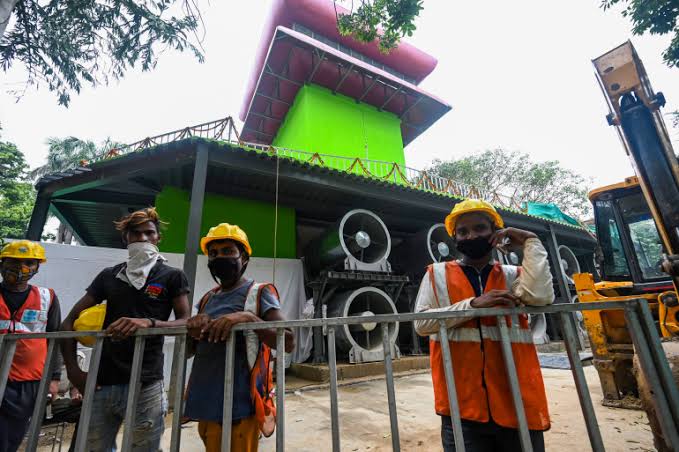 In the coming days of October, Delhi is waiting for the beginning of its season of smog. Due to the stubble burning in Punjab, Delhi's infamous air pollution increases rapidly from pre-winter months to the end of winter and causes a condition of extreme winter smog. This year a new large-scale technology has been welcomed by the Delhi government to fight against this situation. Delhi inaugurated its first smog tower in Connaught Place in August. At the beginning of September, the government inaugurated another tower in Anand Vihar.

The plan to install smog towers was recommended by the Supreme Court in 2019 to the Central Pollution Control Board (CPCB) and the Delhi government. IIT-Bombay then developed a proposal and submitted it to CPCB. The SC accepted the proposal and instructed them to install the two smog towers in April 2020. The project was delayed due to various reasons. The newly installed smog towers are expected to start functioning fully after the end of monsoons.

How do the Smog Towers work?

The towers jointly developed by IIT-Bombay and IIT-Delhi and built by Tata Projects Limited will work under Computational Fluid Dynamics(CFD) technology developed at the University of Minnesota. Both the large-scale towers will be monitored by a two-year-long pilot study, and their impact will be assessed by IIT-Delhi and IIT-Bombay. The towers cost around 24 crores each.

Each tower is 18 meters high from the ground and has a 6-meter high canopy on the top. The tower will work as a 'downdraft' system of air purification. They will suck polluted air from the top and release purified air from the bottom like a vacuum.

There are 5000 filters divided into two layers inside the tower. As the polluted air enters, the 'macro' layer will trap larger particles of 10 microns, and the 'micro' layer will filter smaller particles of 0.3 microns. The filtered air will then go down to the bottom of the tower. The bottom, which is 10 meters from the ground level, consists of 40 fans- 10 each on the four sides. As the fans release the filtered air outside, negative pressure is created inside the tower, sucking polluted air from the top. All the filters and fans are developed in the USA and will be changed regularly.

Both the towers are to release purified air of one thousand cubic meters per second. The towers will be monitored timely with the help of the eight sensors installed. Four sensors will measure the quality of air when it enters, and the other four sensors will measure the quality when released. The real-time data, including temperature and humidity, will show itself on the tower and the website. This monitoring process will be followed by an Automatic Supervisory Control and Data Acquisition (SCADA) system.

Why are Experts not Hopeful?

Countries including China and Denmark have already used smog towers to control air pollution. But both countries failed to provide an ultimate solution to the problem. The tower installed in China uses an updraft system, which is different from the technique used in India.

Delhi has already installed three small smog towers following the technique of indoor air purification. These towers were installed by the "Gautam Gambhir Foundation." Bhavreen Kandhari, an environmental crusader, is monitoring data from those smog towers. She said that the initial data shows no effect at all, and these smog towers are more like 'band-aid' solutions to the actual problem.

There is also a concern over the cost of the tower. Installing multiple towers like these in other cities without scientific evidence of their effectiveness will cause unnecessary expenditure. Many environmentalists are suggesting to utilize the cost at the sources to minimize the pollution from the root.

Anumita Roy Chowdhury from the Centre for Science and Environment has given immense importance to a "centralized segregated waste collection mechanism." She insisted that the focus should be on eliminating waste burning at the ground level by following a "zero-landfill policy." She said that small and medium industries are still using dirty fuels like coal. So the policies should also focus on banning the burning of coal.

Some measurements were undertaken at the ground level, such as treating the polluted air from industries, using PNG gases, reusing and reutilizing the waste landfills, using green fuels at food stalls, installing the air quality monitoring systems, enforcing tree plantation polity, etc. Power plants emitting harmful gases have also been closed. 1.3% of Delhi vehicles are electrified currently, and the Delhi government aims to achieve a target of 25% by 2024.

A recent report provided by CPCB and IIT-Delhi shows an improvement in the air quality of Delhi in the last four years. Many officials are hopeful about the installation of the smog towers. Dr. Anwar Ali Khan, a senior environmental scientist with Delhi Pollution Control Committee (DPCC) said that the towers would clean the air within a kilometer radius. The primary goal of installing the smog towers is to develop air-breathing zones and operate those as rejuvenation centers. Environmentalists and experts are not finding the approach useful and suggest the emphasis should be on the cause rather than the effect.

A Mysterious tunnel was found in Delhi Legislative Assembly