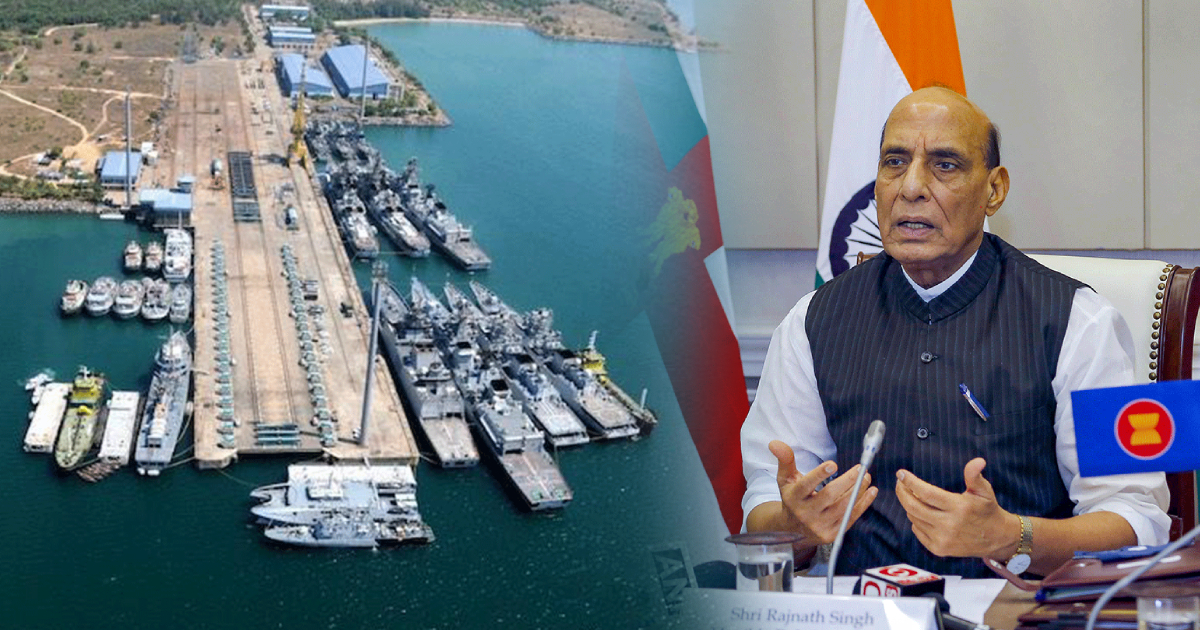 India’s defense minister Rajnath Singh said last Thursday that Karwar (Karnataka) must be Asia’s colossal naval base under the “Project Seabird”.  And if required, then the budget allocated for the project can be enhanced. He said India should focus on being among the top three naval powers globally in the next 10-12 years.

Minister also said. “I had the curiosity to visit Project Seabird and to understand it.. I’m Happy to see Karwar closely, and now I can say that my confidence for this project has increased”.

While addressing the Indian navy, and sailors Minister said, Completion of this project isn’t only for military purposes, but also important for country’s trade, economic development, and humanitarian assistance that it provides to us will also be more strengthen.

It’s said that this will become India’s enormous Naval base, but I wish it to be Asia’s colossal naval base, and we will allocate massive funds for the purpose and enhance these funds even further if required.

Rajnath Singh was accompanied by Admiral Karambir Singh, the Chief of Naval Staff; they undertook the aerial survey of the project area and sites, before arriving at INS Kadamba Helipad here.

Minister also said during the aerial survey of the project, ''I have also cited the bright future of this project. And credit for this has to go to all of the sailors and officers there.'

The Indian Navy plays a vital role in maritime, and national security, and it’s not only me, but all those who have knowledge related to the safety of the country has said that the Navy has the most crucial role in the Indian security system and upcoming future.

Citing the role played by the Indian Navy in the past like;  in the liberalization of the Goa, India-Pakistan war, and various occasions, the Minster added services rendered by the Navy during the corona pandemic and the role of the navy in establishing diplomatic relations with countries. Many other countries also appreciate the role of the Indian Navy, and many countries have come in close ties with us just because of our navy. This is not only a defense purpose but also in the safeguarding of countries' strategic interests.

By highlighting the role of the navy in cultural & trade ties improvements with other countries, the Indian Navy has 7,500 km of coastline, 1,100 islands, and 25 lakh sq km of exclusive economic zones, that can play a crucial role in the development of the world. And done with the help of our capabilities and capacity, which are safeguarded by our navy.

The respective minister added, “sometimes in front of other global powers,  we forget our capabilities. But we dare to carry out our goals, that we can achieve our targets because during fight victory can be achieved only by courage, and not by the ammunition.”

Minister said, “As you have noticed, we proved it again ( our victory ), and in upcoming future and every aspect we will prove it over and over again. And I think I don’t need to take any names, you all are well aware of it, and it’s in our defense force.

The Minister then later added, our defense ministry is taking certain reforms, we don’t think we have any shorting in countries tri-services, but have thoughts to improve it more. We must be prepared for the future, and we will have to develop our capabilities and capacities by keeping in mind the upcoming hereafter.

By citing the Navy’s role in maintaining peace, development, and freedom in Indian Ocean Region, and by analyzing the PM’s vision over, ‘SAGAR’ (Security & Growth for All in Region) the Minister added, “ The time when political, and economic relations are changing rapidly, it’s important for Indian Navy, to further strengthen their capabilities”.

By speaking out about self–reliance of the country in the defense sector, the minister said, various changes, have been made in defense acquisition procedure, as 64 percent of the capital procurement budget will only be for domestic procurement.

In the Indian shipyard, as many as 46 out of 48 submarines have been procured, and some are in the process. The indigenous Aircraft carrier, INS Vikrant, will be completed soon as promised by the commission, for the 75 anniversaries of countries independent.

The defense minister also scheduled his visit for Kochi to review the progress, of the Indigenous Air Craft carrier (IAC) there.