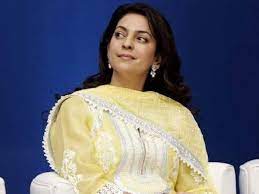 Juhi Chawla's lawsuit against the rollout of 5G, was dismissed by Delhi High Court on Friday. The court not only did dismissed the litigation but also fined the plaintiffs Rs20 Lakh. The bench remarked in their order that "It appears that the suit, was filed for publicity."This legal action was taken by Juhi Chawla, on Monday.

Juhi Chawla is an environmental activist, who stated that the 5G implementation would affect humans and the ecosystem, and the damage will be irreversible. The actor said, "We aren't against the implementation of technological advancement. On the contrary, we enjoy using the newest product that the planet of technology has got to offer, including within wireless communications.

However, whilst using the latter quiet devices, we are dealing a constant dilemma. Because after doing our research and studies regarding the RF radiation from wire-free gadgets, and network cell towers, we have sufficient reason to believe that the radiation is extremely harmful to health and safety. We have reasons to believe that the radiation is harmful and injurious to the health and safety of the people."

Juhi filed a plea against the rollout of the 5G network on Monday in Delhi High Court. She cited the reason for pLea is the impact of 5G radiation and how it will impact the citizen and animals and said that this change can cause irreversible damage to the ecosystem.

In one of her statements, Juhi stated that "there is sufficient reason to believe that the radiation is extremely harmful and injurious to the health and safety of the people." she raised a question for the concerned department to clarify that 5G technology is safe for human and ecosystem. She also said that she is not against the implementation of technological advancement.

On Wednesday, Bollywood actress Juhi Chawla shared the news on her Instagram account that she has filed a lawsuit against the implementation of 5G mobile technology in India. Juhi Chawla even shared the link of the hearing and pleaded for more people to join and show their support for the raised concern. On Friday, the court dismissed the case and even imposed a Rs 20 Lakh fine on the plaintiffs for "abusing the law."

The online hearing started on Wednesday, and surprisingly this meeting was interrupted three times by someone who entered the session and started singing Juhi Chawla's song. This person who entered the hearing on the WebEx platform interrupted the hearing by singing songs like, “Meri Banno Ki Aayegi Baraat”. Not only the songs but the person’s usernames as a source of attraction too. As he appeared on screen with names like “Manisha Koirala” and “Juhi”.

Justice Midha took a strong note of this interruption. Justice Midha ordered his staff to identify the person so the contempt action, can be taken. The court even ordered the removal of the stranger singing song and interrupting the hearing.

Court raised the question for Juhi Chawla that before consulting the court directly, she should have first gone to the government.

The court came out heavily on Juhi Chawla and two others who filed the plea, and they were fined Rs 20 Lakh. The court issued the fine stating the lawsuit to be “defective.” The court was irked by the previous disruption in the hearing by an anonymous person. And they said that the plaintiffs “abused and misused the process of the law.”

The much argued and debated 5th- generation wireless network is about to be implemented globally in the next few years. A chunk of the population is against the implementation, of 5G wireless network technology due to its after-effects.

What is the 5G Technolgy, and what is India's position in the race and WHO?

5G is a new wireless technology used in 2019. It is expected that this innovation will increase better performance and strengthen e-commerce.

5G is the latest up-gradation of the long-term evolution( LTE) in mobile broadband networks. 5G mainly works in three spectrums low, mid, and high frequency, and each of these has its uses and limitations. India has decided in 2018 to start a 5G network as soon as possible. The aim is to strengthen the technology and capitalize on better network speed.

WHO has described the potential health risks from 5G. No adverse effect on health is proven due to 5G in the research carried out.

Health-related concussions can be proven by research and studies performed on the entire radio spectrum, but not much study and research have been done yet. The tissue heating is the interaction between the radiofrequency. And if this radiofrequency remains below the international guidelines, then not many consequences are anticipated on humans.

Few actors are coming in support of Juhi Chawla. Pooja Bedi is one of them. She has come out in support of Juhi Chawla after the Delhi High court dismissed the lawsuit against 5G wireless technology in the country stating that the case was filed for, 'gaining publicity. Pooja Bedi started a poll on Twitter asking if it is fair for the court to dismiss Juhi's case on the grounds of seeking publicity stunt.

Fans came out in support of Juhi. One of the fans wrote in a comment that, "This will discourage other Bollywood celebrities not to raise public concerns in future. It is said they don't drop or come forward for societies and nations seamlessly. I appreciate her initiatives, doesn't matter what happened."

The court termed the suit as "very shocking" and said that this was done for media publicity.