Amid the second wave of Corona, the dispute between the central government, and the Delhi government, regarding oxygen is coming forward and taking another form. A Supreme Court panel has said in its interim report that the Delhi administration, demanded fourfold more oxygen at the height of the Corona crisis, affecting the availability of 12 states.

Political reactions are coming after this report of the audit panel. Union Minister Prakash Javdekar tweeted that the oxygen demand was four times over what it was, and therefore the remaining states had to make up the loss, they fell short. Somebody should learn to create noise from the Delhi government. 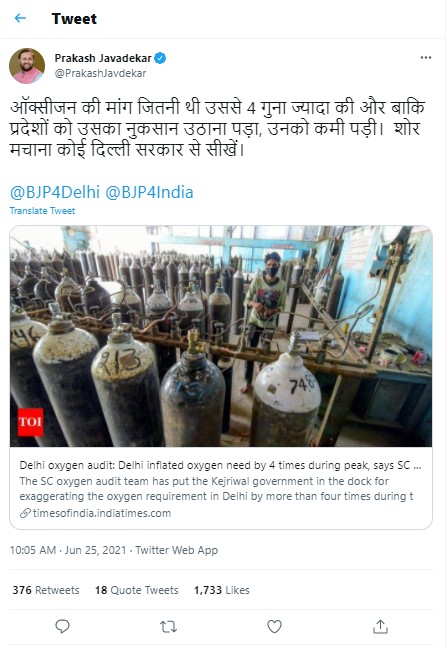 Delhi BJP leader Vijendar Gupta in his tweet said that the Delhi government kept the demand fourfold than they needed, yet it got oxygen supply from the central government. But the hospitals weren't helped, so the Delhiites had to arrange for oxygen through the black market.

BJP MP from Delhi Gautam Gambhir has said that if there's shame left in Kejriwal, he should apologize to the country. 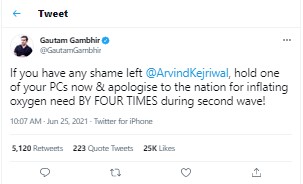 According to the Supreme Court's report, normally Delhi needed 284 to 372 metric tons of oxygen, owing to the demand for more supply eventually it affected other states. The panel is additionally inquiring about the management of 4 hospitals in Delhi. In these hospitals, more oxygen has been consumed, considering the number of beds. These four hospitals include Singhal Hospital, Aruna Asif Ali Hospital, ESIC Model Hospital, and Liferay Hospital. Reviewing the report, these hospitals gave the wrong data, and the oxygen requirement in Delhi was exaggerated. 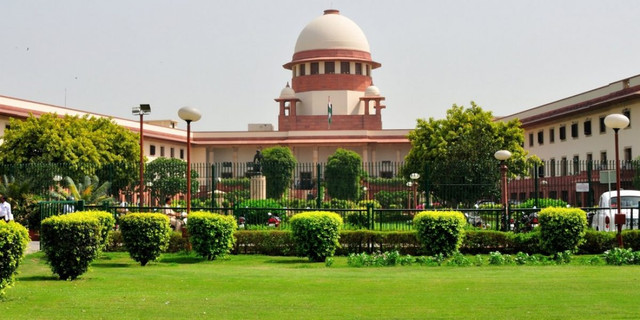 During the second wave of Corona in May, Delhi reported a shortage of oxygen. The Delhi government and a few private hospitals had moved the Supreme Court on this and demanded to extend the oxygen supply immediately. Then the bench of the Supreme Court headed by Justice DY Chandrachud, and Justice MR Shah, formed a task force of 12 people. The court had sought an audit report on the availability and demand of required oxygen. Apart from 10 famous doctors of the country, two organizations, are also included within the committee. The court had given six-month time to the committee to submit its report.

Kejriwal expressed his gratitude for getting 730 tons of oxygen supply for the state: It is worth noticing that in April-May, when Corona was at its peak, many hospitals in Delhi had to face the oxygen crisis, and it even came to the fore that a lot of people lost their lives. It was claimed that corona patients died because of a lack of oxygen. After this, there was a dispute between the Kejriwal government and also the central government regarding oxygen.