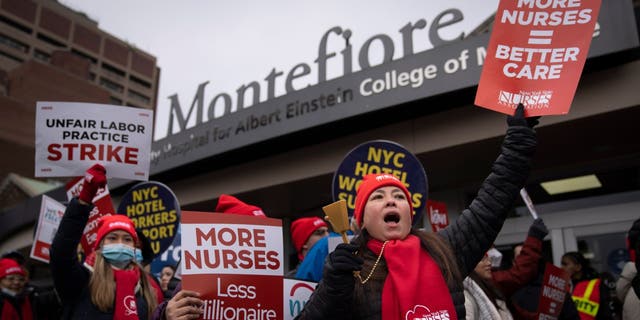 In the Bronx and Manhattan, New York City, over 7,000 nurses have taken to the streets to protest their working conditions. 3500 nurses from Montefiore Medical Center in the Bronx and 3600 from Mount Sinai in Manhattan woke up early, planted themselves in front of their respective hospitals, and stayed there in the cold New York City winter temperatures for hours on end. That said the same things they chanted and wrote on their wax cardboard signs, “fair contract for nurses & patients” and “nurse outside = problem inside.” The “problem inside” that this sign refers to is a staffing issue primarily. One of the Mount Sinai nurses, Amanda Smith, puts it like this in an NBC interview: “they say safe staffing, saves lives, and the nurses at Mount Sinai are working at a bad patient-to-staff ratio, We’re here for better staffing conditions.

This sentiment, which emphasizes staffing as the main issue of this strike, is a common one among protesters of both hospitals. Like the ongoing railroad strike, the main point of contention here is not wages, but decent working conditions. The New York State Nurses Association (NYSNA) leader Nancy Hagans brings this understaffing problem into perspective in a call with the Associative Press (AP). She says, “Montefiore has 760 nursing vacancies… …too often one nurse in the emergency department is responsible for 20 patients instead of the standard of three patients.” A fellow union member, Judy Gonzalez, corroborates Hagans sentiment to the AP: “I don’t feel like I’m doing a service to my patients,” she said. “I have patients who grab my shirt, and I can’t help them because I have to do something else.” This speed and overwork are what nurses of these hospitals are expected to deal with non-stop for upwards of 14-hour shifts. Sometimes without time for breaks of any sort.

But despite these explicit demands of hiring more staff, Mount Sinai is refusing to give more ground than a 19% pay raise over three years and 170 hires. A 19% pay raise isn’t a bad thing, but it’s not a particularly tantalizing prospect if in the face of three years of inflation and grueling work. Likewise, 170 hires are certainly better than zero but aren’t enough to fill the approximately 500 vacancies in Mount Sinai. Also, it’s not what the nurses are asking for at all. They’re asking for more staff to decrease their workload.

The hospital’s response to the nurses seems pretty reasonable without context. The hospitals are claiming that there is a shortage of potential nurses. The chief nursing officer at Mount Sinai, Francis Cartwright, put it like this; “We've hired more than 2,600 nurses in the life of our contract over the past four years. We have a retention issue consistent with the rest of the country. Nationally, we're in a workforce crisis.” The retention problem Cartwright mentions here is certainly true. In hospitals low-staffed like Mount Sinai and Montefiore, the enormous stress of the job chases off plenty of new hires. But it doesn’t chase off all of them. If one out of every ten nurses stays at a hospital for more than a year, the two hospitals would just need to hire 20 or so nurses a month to build themselves a stabilized workforce within a year.

To this point above, the hospitals have cited a nursing worker shortage in New York City. Unlike the retention problem, this problem does not exist. In New York state, among many other US states, the number of registered nurses has gone up, not down. The license statistics for registered professional nursing on the New York State Education Department’s Website show’s a steady annual growth of the licenses issued since 2017. In 2017 17,215 were issued, in 2018 18,607 were, in 2019 21,513 were, in 2020 23,611 were, and in 2021 26,348 licenses were issued. In 2022 there are 258,443 registered New York State Nurses. Approximately 75,000 of those state nurses are localized to New York City. This is about 10,000 more licensed nurses than last year.

This information is public, but it is not advertised by anybody but the strikers. Mainstream media sources are covering this story by choosing to cover the deaths and inconveniences to patients that this strike is creating, rather than the cause that the strike is fighting for.

In the same interview with Mount Sinai striker Amanda Smith, NBC news reporter Andrew Siff makes a point to mention Mount Sinai’s side of the story. He cuts the brief to Cartwright who says “We’re hearing our nurses here saying safe staffing. We had sent a proposal for uh… staffing, and when they left they hadn’t sent us a counter.” Next, he mentions all the inconveniences that Mount Sinai is facing because of the strike. Babies being transferred, surgeries being pushed back, etc. Then he cuts to a protester saying, “That ain’t right, shame on you Mount Sinai.” First, he presents the representative of Mount Sinai, Cartwright, as reasonable. Then Cartwright implies the protesters aren’t protesting reasonably because they didn’t give her a counteroffer. Therefore, she’s reasonable and the protesters are unreasonable. Then he brings up the bad effects of this strike, therefore implicating the unreasonable party as the culprit. Finally, he cuts a protester out of context, saying “That ain’t right,” right after all the bad effects of the strike are shown. This makes one who is sympathetic to the protesters think that maybe Siff is too. Simultaneously it makes the viewers who aren’t sympathetic to the protesters think that they are contradicting themselves. That Mount Sinai is not the reason why “that ain’t right,” the protesters are the reason.

The reality of the situation is that the offer Cartwright gave the protestors was the same one she’d been giving them for four months, a 19% raise over three years and a “promise” of filling 170 of the 500 vacant positions. Whatever counteroffer the nurses might have wanted to propose had already been proposed and rejected by Cartwright 20 times over. If Mount Sinai and Montefiore were willing to increase the staffing to an ethical level, they would have done so long before this strike was necessary.

So why then, haven’t the two hospitals hired some of the 10,000 newly registered nurses in New York City? The answer has to do with “The Affordable Care Act,” and many hospitals’ disdain for “mandatory minimum nurse staffing ratios.” “Mandatory nurse staffing ratios” are an experiment that is being promoted hard by the National Nurses United (NNU) non-for-profit and fought against hard by hospitals like Mount Sinai and Montefiore. It’s a pretty self-explanatory concept, it sets a mandatory minimum on the number of nurses employed in a hospital. Were it to be implemented, it would ensure regular staffing and reprieve the need for strikes like this one. However, it would also require that the hospitals pay more nurses than before. The ACA continues to crack down harder and harder on hospital spending, and US hospitals don’t typically lower management salaries or downgrade equipment when they need to cut costs. Instead, they fire a bunch of people whom they deem to be low-skilled workers. Or in other words, they fire nurses and other front-line, pivotal hospital laborers.

This crisis didn’t happen because these two hospitals fired a bunch of their nurses and never rehired them. Rather, these hospitals, like so many others in the country, lost a lot of nurses during the stressful times of Covid-19. They quit or got sick or just burned out and left the job. Some of the hospitals lost nurses and other important laborers and rehired others from the vast pool of newly registered nurses. Others decided to cut costs and throw all the chaos upon their front-line workers. The second group describes Mount Sinai and Montefiore.

This behavior doesn’t advantage anybody but the people running the hospitals. More than that, it put patients in the hospital at risk and subjects nurses to incredible stress. When there are fewer medical laborers in a hospital, there is less safety among the patients. Hence the chant “safe staffing saves lives.”

Ultimately both sides of the strike are posturing their position as, “in support of the patients.” The nurses make a strong argument that if they are assigned to 20 different patients, they won’t be able to help all of them effectively. Therefore, they need to strike for more staffing so that the patients of these hospitals can get proper help. Whereas the hospital management argues that the nurses are solving any problems with their strike and are just harming patients who enter by doing it. Both are fine narratives in a purely newsworthy sense, but one has backup and the other doesn’t. Namely, mainstream news segments like Siff’s punctuate Cartwright-like characters as informed and Amanda Smith-like characters as misguided and uninformed. This is a strong pattern in the mainstream news media and will likely be seen again multiple times.