The Silverline project (Semi High-Speed Rail) under K-rail (Kerala Rail Development Corporation) is a new emerging project to be implemented by the current LDF government in Kerala in the coming 3-5 years. The project aims to increase the efficiency of railway transport in the state by reducing the travel time to a mere 4 hours from Trivandrum to Kasargod, which are the two endpoint districts of Kerala from South to North. Currently, it takes approximately 11-12 hours to transverse from Trivandrum to Kasargod by train. The project, if it sees its completion can be considered one of the most important and expensive infrastructural projects ever undertaken by the Kerala government. However, the developmental goals of this project are being contested by multiple groups because of its economic, environmental, and social implications.

The Silverline train route is estimated to cover a distance of 529.45 km with a top speed of 200km/hr across 11 districts. The implementation is being facilitated by K-rail (Kerala Rail Development Corporation) underfunding the state and central government. It is said to function on 100% renewable energy sources and it runs on Standard Gauge systems, unlike the Broad Gauge systems in which the Indian railways and trains currently operate. The Standard Gauge system has international standards and comes under EN (European standards) and UIC (International Union of Railways) codes of conduct. In India, these Gauge systems are seen to operate in all the metro projects. Considering the increased speed and international protocols being followed for the Silverline project, the estimated cost for its completion is around 63,940 crore. 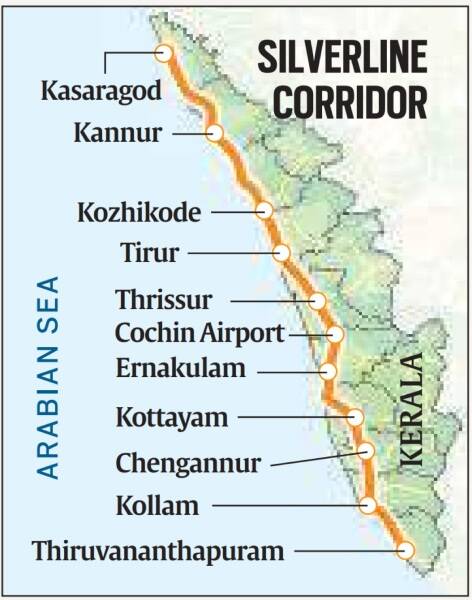 Silverline also aims to reclaim wasteland from lost agriculture fields to convert the landscape into a modern urban spectacle that can attract investments and reduce time constraints thereby increasing the efficiency of economic and infrastructural growth in the state. One of the other factors that are taken into consideration is how the two major IT hubs in Kerala Technopark (Trivandrum) and Infopark (Kochi) will become more accessible as the travel time between both will reduce drastically. Employment generation is also a very vivid attraction in terms of how 50,000 people will become labor force during the construction phase and another 10,000 workers are expected to fill in after completion.

The initial idea for this project was tabled in 2010 during the state budget session by then Finance minister T.M Thomas Issac, representing the LDF. However, the necessary steps and process for initiation started only in 2020 under the second consecutive stint of the LDF government under Pinarayi Vijayan. The development of new offices under K-rail happened during this time to acquire land and further do a background study about the feasibility of the project. 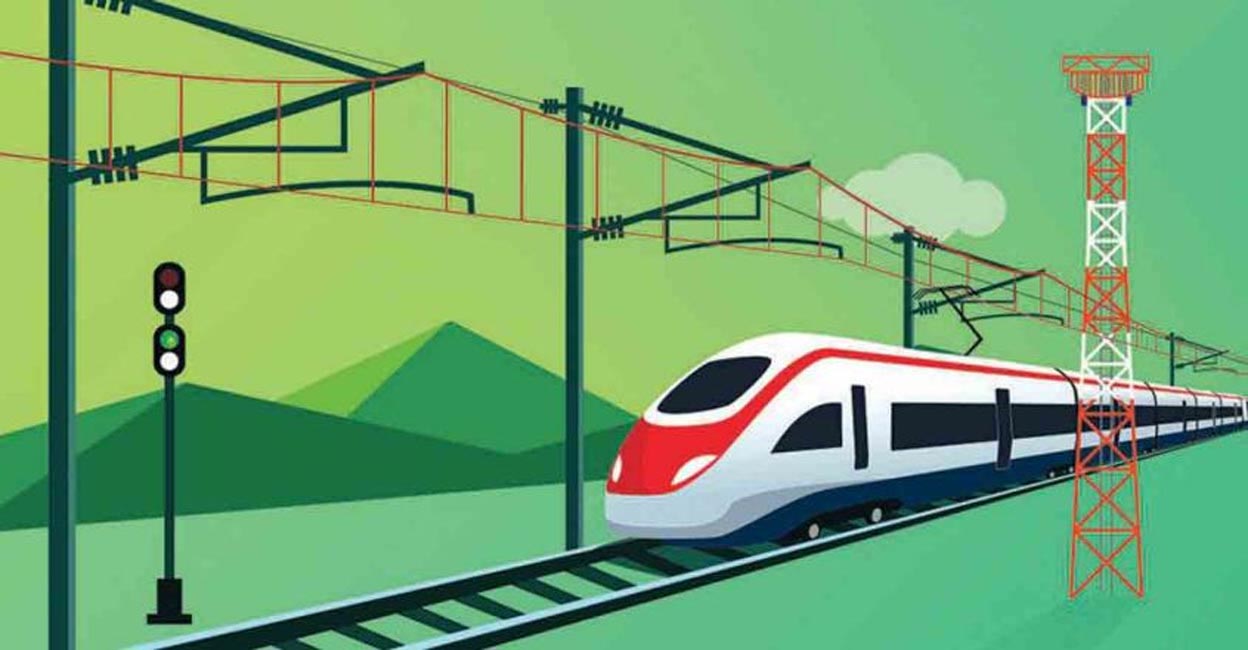 Feasibility reports and their inconsistencies

The Environment Impact Assessment (EIA) report which is published on the K-rail website opened the Silverline proposal to immense controversy, especially in regards to the ambiguity in terms of how the environmental impacts and social displacement of around 9000 families will be dealt with less destructively. Even though the right measures and needs are rightly highlighted with potential issues arising for the project, there is a lack of research and understanding that is seen in this initial EIA report submitted towards the end of 2020. For instance, the report mentions flood risk areas that have been identified in the Kollam-Kasargod stretch and areas in and around the Cochin airport. The need to conduct hydrologic studies during the process of construction and not before it (as should have been done in the EIA report research) is surprising. Also, the entire geographical mass required for the project was conceived initially through Google mapping systems and the fieldwork to it is seen to be minimal. The inclusion of around 295 km’s worth of embankments, bridges, and other overlying structures for the construction of the railway is also a worrying factor considering the flooding and damage such manmade structures could induce through the disruption of local flora and fauna, especially in areas around the Western Ghats which are ecologically very sensitive.

Considering the shortcomings of the report which was prepared and compiled by the ‘Centre for Environment and Development, K-rail has entailed the task to ‘EQMS India’, a research organization to produce another EIA report regarding the Silverline project.

Initially, K-Rail also referred to a Social Impact Assessment (SIA) that was conducted alongside the EIA, but currently, the Kerala Government mentioned to the high court that the Social Impact Assessment was only initiated in August 2021. The hearing in court arose after opposition arose from parties like UDF, BJP, and other organizations. Several environmentalists also came to the forefront to protest against the preliminary procedures being undertaken for the project. The preliminary assessment for the same has started in the form of demarcating spaces and analyzing the boundaries which will be acquired for the project. This has created stiff resistance from the common public as their shelters and land will be taken away as a result of the acquisition process.

The approximate date of completion is scheduled for 2025, even though sources mention this to be highly unrealistic considering the extent and expansiveness of the plan. The detailed project report (DPR) which still hasn’t been released to the public even though multiple RTI’s were filed for the same mentions how there will be a daily footfall of at least 82,000 per day after completion. K-Rail MD Mr. Ajith Kumar cites the traffic survey report conducted by them to prove that the numbers are real and empirical. Realistically if these numbers will hit the target is another story itself. Even if only half the numbers from this projection use the Silverline, the economic returns from the project seem unprofitable. The footfall expected will be converted commuters who use highways daily for travel.

The running of the Silverline infrastructure might be from 100% renewable energy sources but the question that comes is if the environmental impacts arising from its construction are worth it or not?

Metro Man E Sreedharan is also apprehensive about the project in every regard of its proposal. E Sreedharan recently contested the legislative elections under a BJP ticket in Palakkad. But, his stance cannot just be ridiculed as a political move. If there is anyone in this country who can give an opinion regarding the matter, the experience of E Sreedharan stands ground.

E Sreedharan claims that the embankments coming up in large areas of agricultural land will only further disrupt the drainage channels in the locale, thereby increasing the chance for flooding. He also claims that embankments put up following flood regulatory measures as mentioned in the EIA report won’t produce the fruitful results expected. Mr Sreedharan is also of the opinion that the initial budget for the project seems highly unrealistic and can go up to around 1.1 lakh crores instead of the 64k crore currently proposed.

Kerala Shastra Sahitya Parishad, an organization that works for socially relevant issues bringing about ideas and reforms for social progress through scientific discourse has expressed their dissent regarding the project's prospects. Their stance came up when the government started earmarking boundaries for acquisition. According to the organization's general secretary, P Gopakumar, and President OM Shankaran, the Silverline initiative is a project that only caters to a certain class of people and doesn't take into account the needs of the common public.

In December 2021, a family from Thiruvananthapuram even threatened to self immolate themselves when officials came to demarcate their land for the Silverline Project as part of the Social Impact Assessment.

The use of standard gauge instead of the Indian railway’s broad Gauge system also means that an entire railway structure with new stations and new infrastructure has to be developed in the state. Suggestions are arising that if broad Gauge systems are used, the already existing trains can also ply through it as a double rail and reduce traffic. However, K-rail is of the stance that the existing curves in the current Kerala railway route will have to be straightened out for this to work more efficiently and this will require more renovation requirements than the current Silverline proposal. It is also important to note that the Delhi-Varanasi train called the Vande Bharat Express has a top speed of 160 km/hr with a broad gauge compared to the maximum speed of 220km/hr in Silverline’s standard gauge. Hence there isn't much difference in the costs implied. So if Silverline is implemented the economic costs will get strained and the period will also be delayed considering that everything has to be built from scratch and it is highly doubtful if it will be completed by the estimated year 2025.

Minister of Industries, Mr. P Rajeeve did mention that Cochin would be the most to benefit from the project as people from the district can access the two ends of the state in a matter of just 1-2 hours. This is true and relevant especially in the context of connecting two major IT hubs, Technopark and Infopark. Even though this is a great proposition for a large number of working individuals who have to transit continuously across the state regularly, the post COVID work culture and economy have bought about a virtual remote form of work need which no longer expects this form of travel requirements. Environmentalists like Sridhar Radhakrishnan and policy expert D Dhanuraj from the Centre for Public Policy Research based in Kochi have the same stance regarding the matter, as suggested by reports.

Apart from the hydrological studies to be undertaken as part of the Environment Impact Assessment the aspect of climate change and the continued flooding and sea erosion happening every year in multiple parts of Kerala is worrisome and must be factored in during the implementation process.

In an email interview with ‘The Hindu’, KT Ravindran, urban designer and from the ‘School of Planning and Architecture in Delhi says that “The Silverline Project flies in the face of the climate crisis”

He further mentioned, “Kerala is under assault from both sides, from the sea and the mountains by aggressive water flow”.

The words echo through places like Chellanam in Kochi where there has been seasonal sea erosion happening every year for almost 8 years now and the people in the area are still suffering. Pinarayi Vijayan has written to Prime Minister Modi regarding this matter and expects a fast-tracking to happen from the centre initiative. The central government is backing the plan in this regard and the railways have also asked the Kerala government to continue its survey for the matter as well.