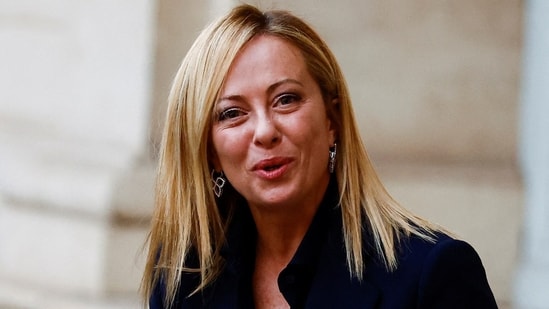 On Saturday, Giorgia Meloni and her cabinet members were sworn in, as Italy's first female prime minister as well as the most right-wing administration Italy has seen since World War Two.  She assumes office at a particularly precarious time, with the debt-ridden economy of Italy once again on the verge of recession, businesses collapsing under the weight of skyrocketing energy costs, and divisions within her coalition over the conflict in Ukraine.

In a coalition with Silvio Berlusconi's Forza Italia and Matteo Salvini's anti-immigrant League, Meloni, leader of the nationalist Brothers of Italy, claimed victory in an election last month. Her administration, the 12th of this century, takes over from a national unity government led by Mario Draghi, a former executive of the European Central Bank who was at the vanguard of European Union efforts to censure Russia after they invaded Ukraine in February.

After several days of difficult negotiations, Meloni announced her choice on Friday, giving the League and Forza Italia five ministries each but saving nine cabinet positions for her party.

Giorgia Meloni, Italy's first female prime minister, rose from modest beginnings in Rome and spent three decades paving the way to the top of the political food chain with a steely will that even her critics could not help but admire.

Meloni joined the crowded political scene in Italy in 2006 and co-founded the Brothers of Italy, a party with anti-immigration and Euroskeptic principles, in 2012.

Meloni has gained some power thanks to luck. She became the lone opponent since her Brothers of Italy party was one of the few to reject Mario Draghi's national unity administration. Despite having led her party for ten years, she has only served as Italy's youngest minister under the Berlusconi administration from 2008 to 2011. Despite receiving only 4.3% of the vote four years prior, her party received 26% of the vote in the elections held in September 2022.

According to Italian political analyst Prof. Roberto D'Alimonte, "Giorgia Meloni comes from a post-fascist cultural background, but recently she's taken a fairly moderate attitude and declared she won't change [predecessor Mario] Draghi's policy on Ukraine." She took this action to strengthen her credentials as a legitimate candidate for prime minister.

Garbatella, a working-class but developing neighbourhood in southern Rome, is where Giorgia Meloni is from. In this typically left-leaning area, it is difficult to locate many Brothers of Italy voters.

In Rome's Quirinal Palace, Meloni made Matteo Salvini, the head of the League party, the minister of infrastructure in her new government.

The Forza Italia party, led by former Italian Prime Minister Silvio Berlusconi, will form a coalition with Meloni's Brothers of Italy party, Salvini's League party, and the new government. Forza Italia and the League each received five ministries, compared to nine for the Brothers of Italy.

Despite the neo-fascist origins of her party, Meloni worked to present a moderate image throughout the election campaign by abandoning earlier anti-EU statements and promising to maintain Italy at the centre of European and Western institutions. On Saturday, she received words of gratitude from members of the European Commission in Brussels.

Commission President Ursula von der Leyen posted on Twitter, "I count on and look forward to constructive cooperation with the incoming government on the problems we face together."

The nationalist conservatives of Europe praised Meloni as well, hoping that her administration will be a strong partner in their ongoing conflicts with Brussels."Congratulations on establishing your administration, Giorgia Meloni! The European Right is having a big day!" Viktor Orban, the prime minister of Hungary, posted on Twitter.

"Patriots are coming to power across Europe," wrote French far-right leader Marine Le Pen in a tweet. Following a formal transition of power with Draghi, Meloni is scheduled to conduct her first cabinet meeting on Sunday. Following that, she will be subject to required confidence votes in parliament during the following week, which she will comfortably win given her large majority. On Saturday, Giorgia Meloni and her cabinet members were sworn in as Italy's first female prime minister, establishing the most right-wing administration since World War Two.

A PROMISE TO “GOVERN FOR EVERYONE”

She assumes office at a particularly precarious time, with the debt-ridden economy of Italy once again on the verge of recession, businesses collapsing under the weight of skyrocketing energy costs, and divisions within her coalition over the conflict in Ukraine.

Meloni is taking responsibility for the issue because the prime minister has good reason to be frustrated. Before delivering it to Brussels for approval by the end of October, her first duty will be to finalise Italy's 2023 budget, a procedure that has previously resulted in disagreements with the EU. Meloni told Reuters in August that she would be "responsible" with the nation's finances despite Italy having one of the worst levels of public debt in all of Europe and despite her coalition's campaign promises of large tax cuts, greater pensions, and a decreased retirement age.

The new prime minister has pledged to lead "for everyone," and she has made an effort to reassure Italy's friends in NATO and the EU that its foreign policy would remain unchanged. A crucial factor considering that Silvio Berlusconi and League President Matteo Salvini are both ardent Vladimir Putin supporters. She announced the names of her cabinet members and took the oath in front of Italian President Sergio Mattarella not long after accepting the mandate to form the government, which is made up of Silvio Berlusconi's Forza Italia and Matteo Salvini's extreme right League.

Meloni has been a steadfast ally of Ukraine in its struggle against the Russian invasion. She reiterated her stance on foreign policy amid criticism directed at her coalition over Berlusconi's leaked remarks.

The alliance led by Meloni has vowed to be vehemently pro-NATO and in favour of the EU's sanctions against Russia for its invasion of Ukraine. However, in light of Salvini's former adoration of Putin, his condemnation of the sanctions owing to their effects on Italian industry, and Berlusconi's rekindled friendship with the Russian leader, it may be challenging to retain this stance while the war drags on.