Memes and war: the unfolding of the Ukraine-Russia war through memes 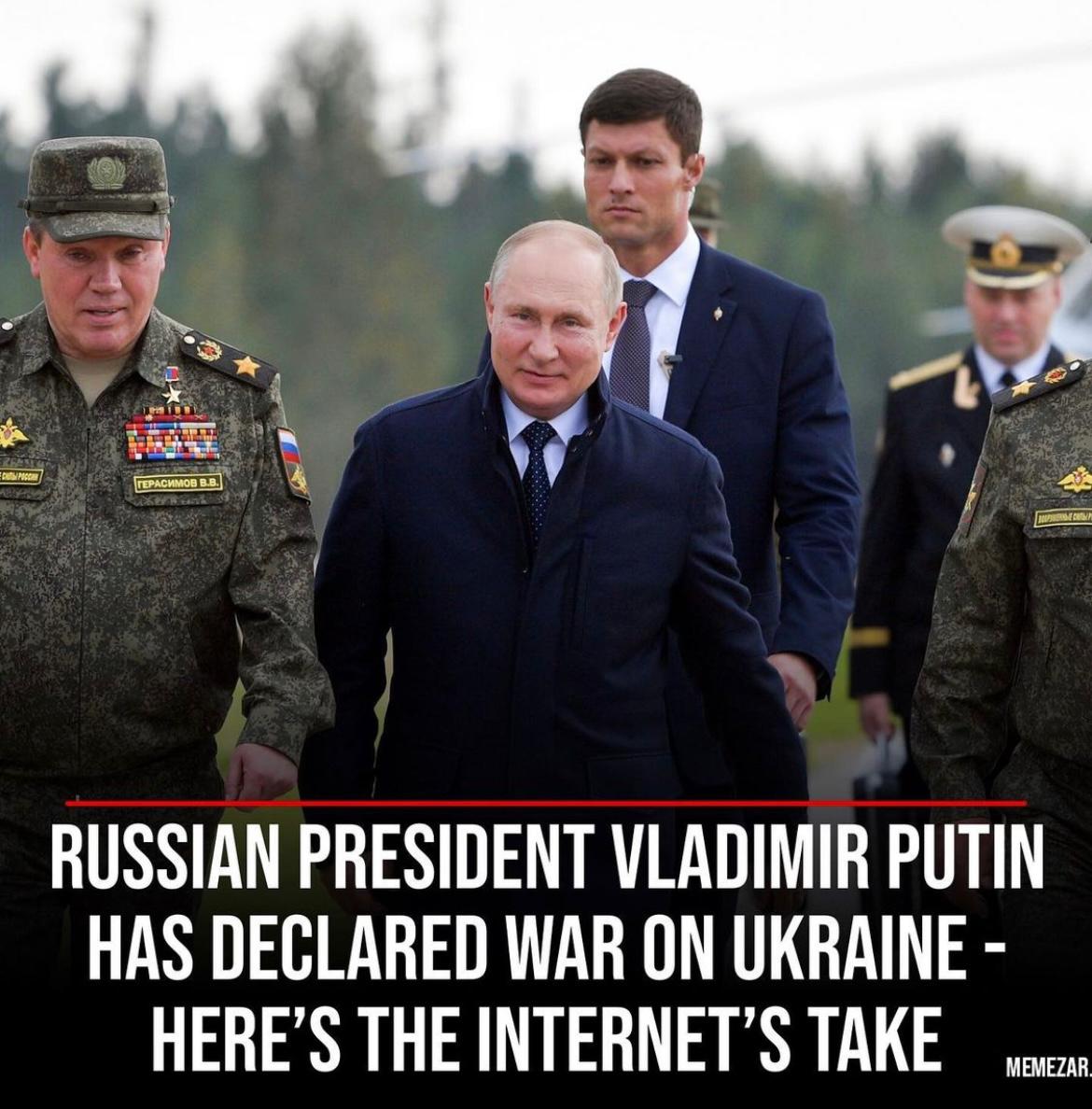 Memes and war: the unfolding of the Ukraine-Russia war through memes

In the days when #WW3 is trending and news headlines are all about the political tensions between Ukraine and Russia, it is hard for people to not follow the developments as they are unfolding.  The choice of whether we want to interact with the news as well as how much we want to interact is harder when social media has become part of the ‘’virtual reality of war’’.

What has been significantly visible in this media response to war, is meme culture.  Meme culture largely depends on the combination of a picture which is normally derived from pop-culture followed by a caption of relevance.  While the aim of a meme is to entertain the audience by depicting a situation it tends to also display a reality or as this article argues, a sad reality in a sarcastic manner.  What is the role of memes in this ongoing crisis? Are memes appropriate to share when they refer to a war and all the implications that come with it?

While countries around the world begin to ease COVID restrictions and we finally see a light at the end of the tunnel, we find ourselves watching the invasion of Ukraine and the international community condemning the actions of Russia through sanctions.  The example of the memes below can be argued to represent the excitement of people for the end of the COVID restrictions and the shock over how quickly things can change.  How do we go from one crisis to another in a matter of days?  One day we begin to think that normality is coming back, and our lives can go back to what they used to be and suddenly we find ourselves so close to a new war but still so far away. 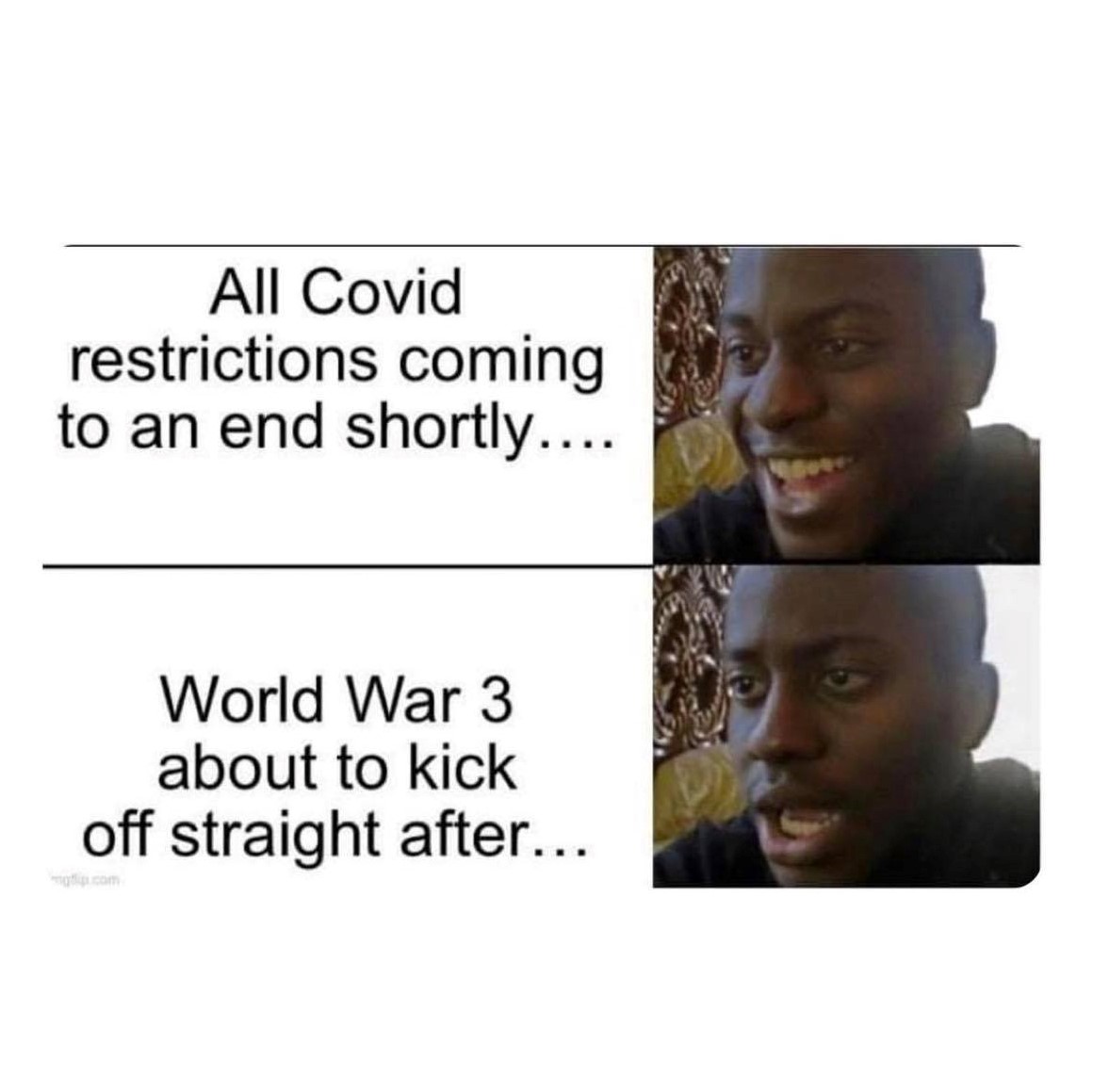 Even though we are not the people fighting or leaving our families and houses behind to escape from conflict, the captions of these memes speak for everyone and not just the people who are directly affected by the wars.  In these scenarios, the role of memes highlights the overwhelm and exhaustion people feel over the horrible things happening around them no matter where they are in the world. 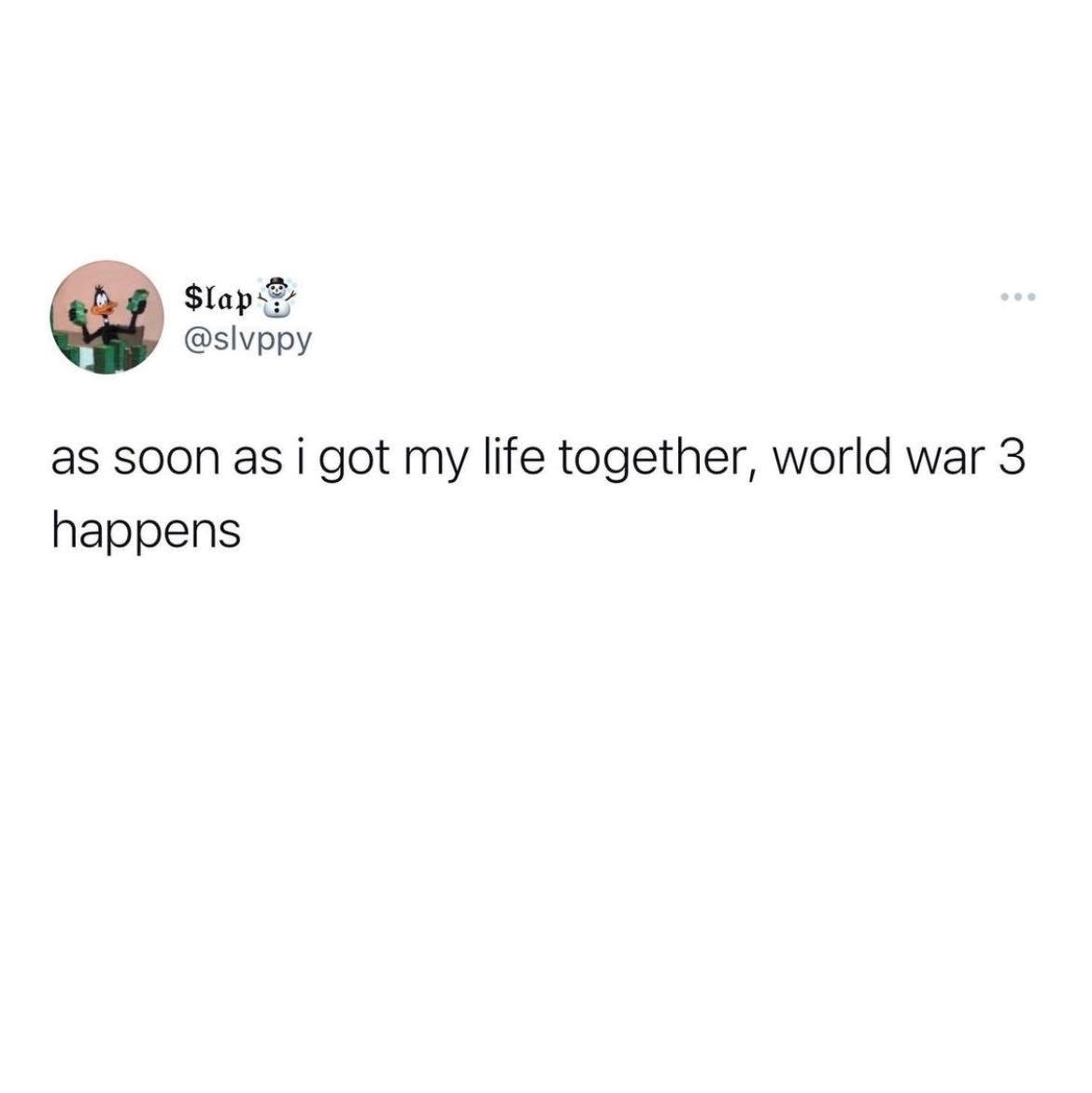 In the case of Ukraine, social media has been following the developments every step of the way.  The world knew a war had started the minute it did.  Citizens are sharing their next moves with airstrikes in the background.  Soldiers are sharing videos getting ready for the fight.  The world gets to see and comment on every post, picture and live stream available on the media.  Today, more than ever before, we can show where and more importantly with who we stand through the use of social media.  A simple reaction button can be considered a way of supporting or disagreeing with someone or something.

The below meme portrays how with the option to block someone, and in this case the U.S Army, we also have a way to hide from the catastrophes around us.  Even though it does it in a sarcastic way, this meme gives social media a significant role in how involved we choose to be with what is happening around us even if it is something as important as a war. 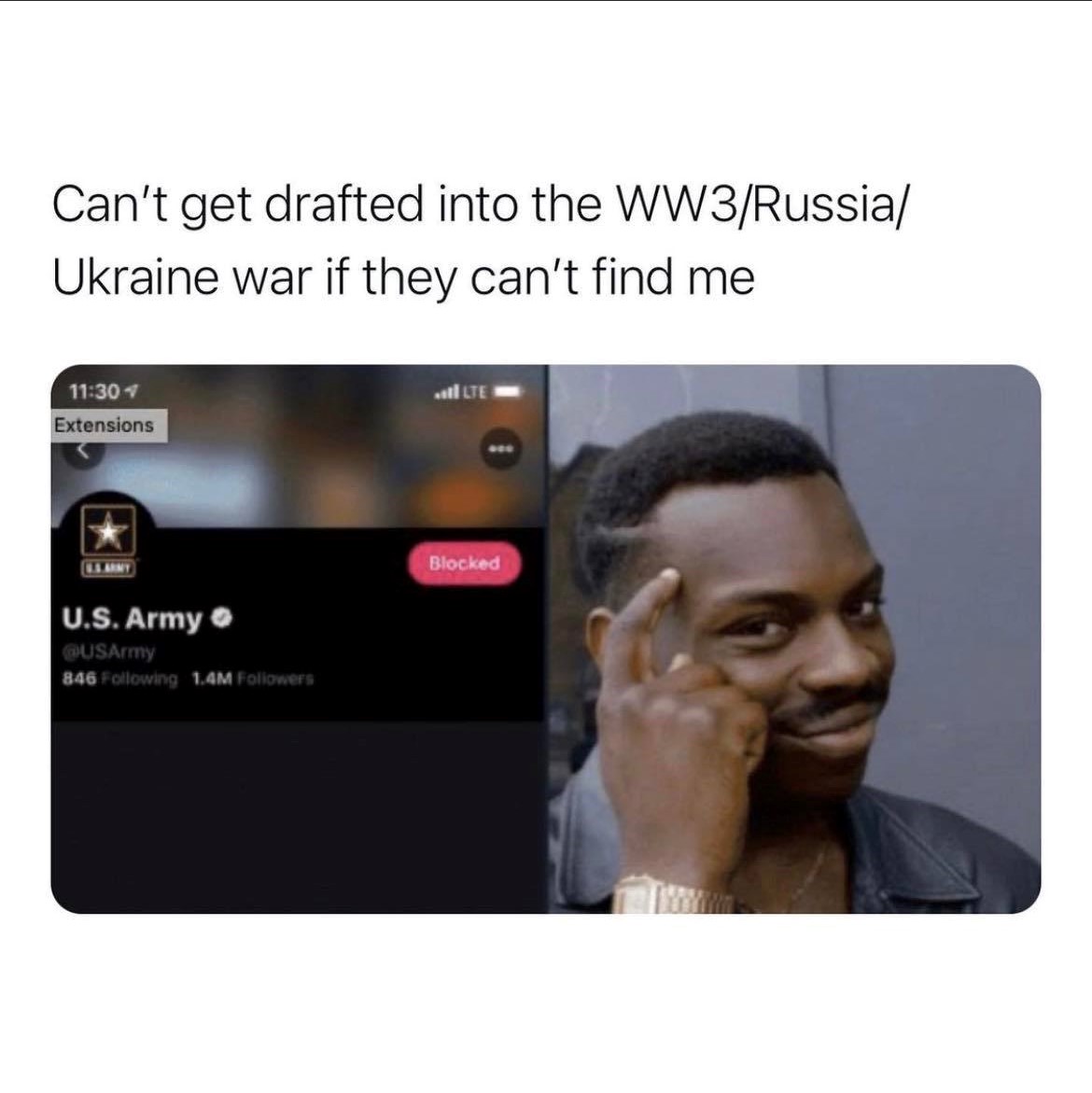 In other cases, the role of memes can be considered a coping mechanism.  A way to look at what is happening through the lens of humor or dark comedy.  While we know a war crisis is atrocious as it is, memes reassure the sad reality in a satirical manner.  For example, the alleged picture from plane finder acknowledges the fact of an ongoing war happening but also makes a joke about a plane from New Delhi to Frankfurt flying over the conflict zone while the rest of the planes detour. 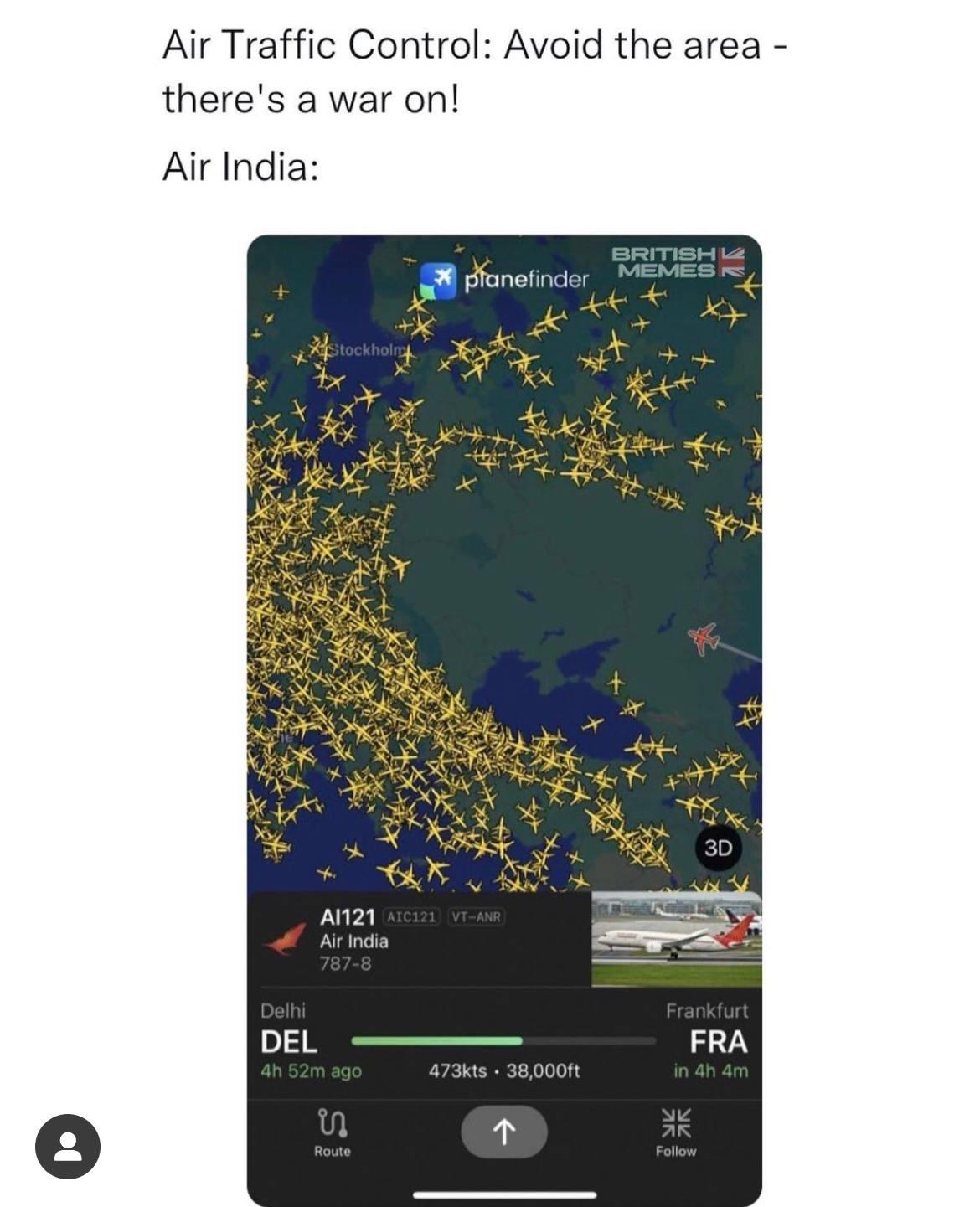 The meme of Putin also jokes about the reports of WW3 happening virtually due to the restrictions of the pandemic.  This meme of course fails to acknowledge the thousands of soldiers deployed to fight for their country.  On the other hand, one can argue that this meme hides an unspoken wish for the war to simply stay online, behind a screen where no more people have to suffer. 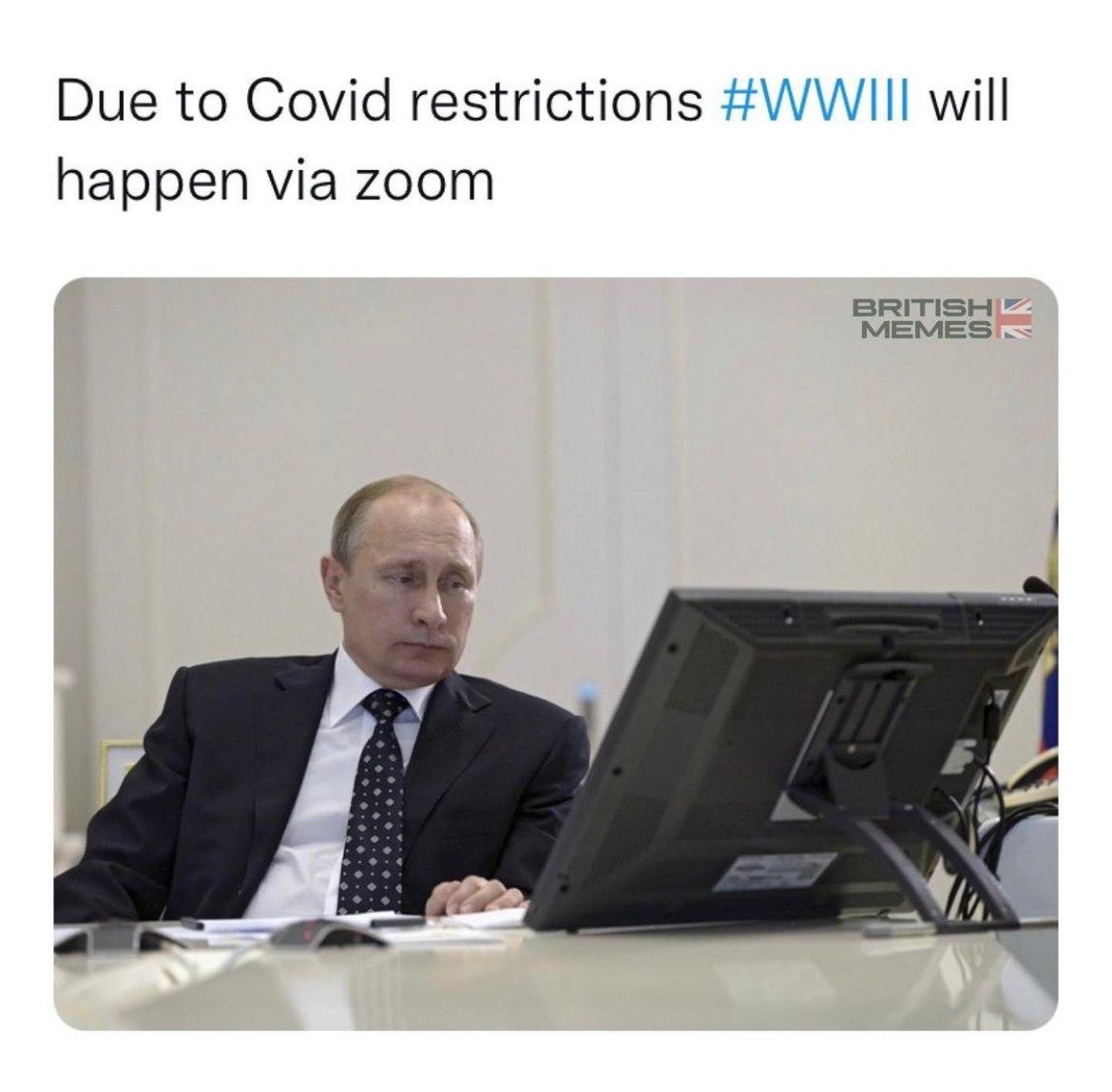 One of the first memes I became aware of was an alleged tweet from the official Ukraine account.  The meme presents different types of headaches and which part of the human head might be aching.  The last part of the meme presents the human head with a full headache and is captioned ‘’living next to Russia’’.  This meme aims to sarcastically explain the tension and discomfort that Russia has caused Ukraine for years based on their geographical position.  The meme was used by the public and was recently trending on twitter along with #WW3. 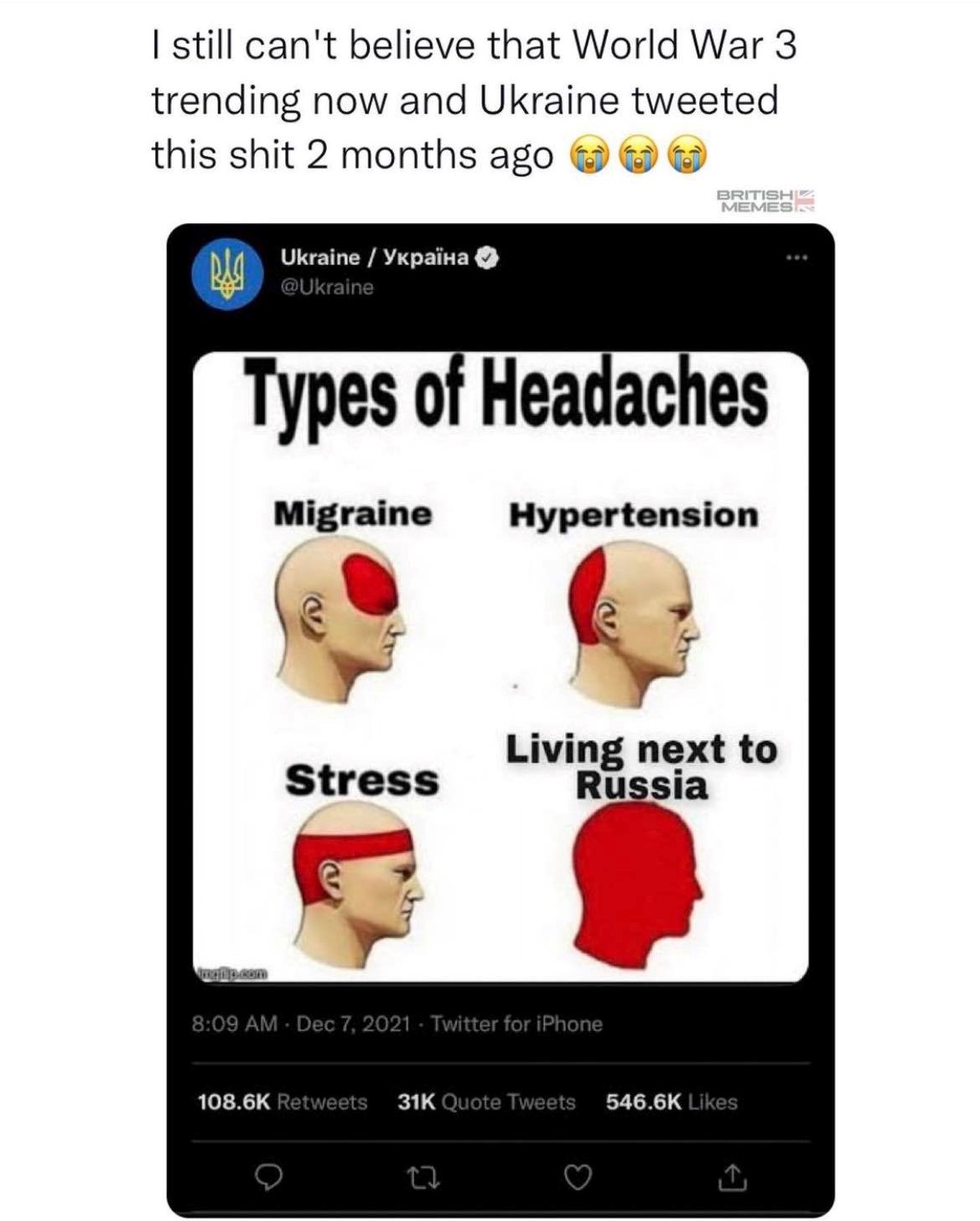 This final meme I include in this article portrays some of the wars happening in the world at the moment.  While the majority of the world’s attention in the past days has been on Ukraine, countries such as Palestine, Yemen, Iraq, Afghanistan, Somalia, Myanmar and many other countries have been left to drown.  This meme has been argued to represent the existence of a double standard when the invasion of a European country gets significantly more attention in comparison to countries which have been facing conflict for decades. 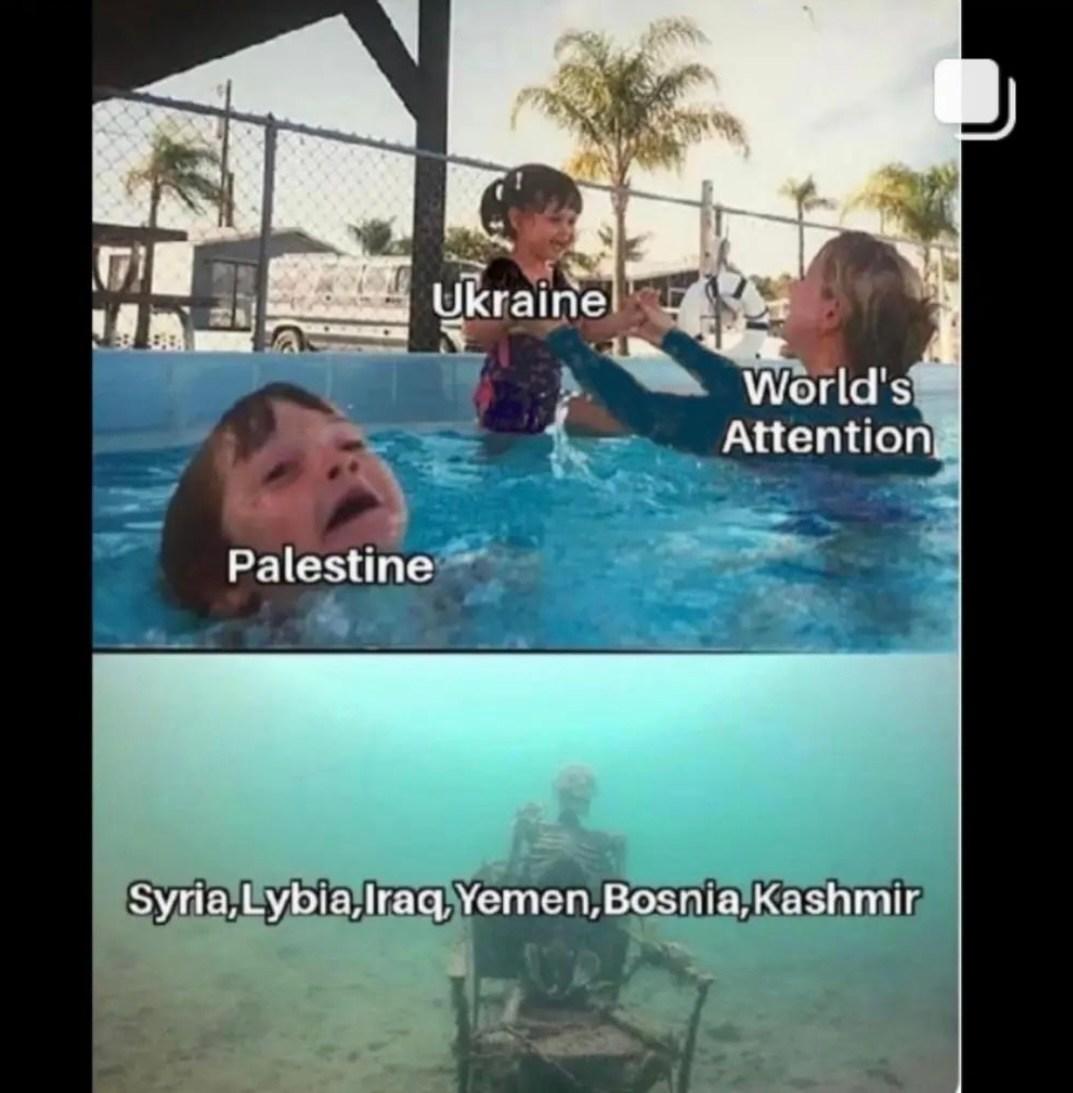 Finally, I come to analyze the generational theme that is apparent in all of the above examples of memes.  It is important to emphasize that while this article tries to identify the role of memes in the current war crisis, people around the world also struggle to understand how memes contribute to the situation.  The meaning of war for our parents’ and grandparents’ generations or the people in countries who have experienced the consequences of war in the last decades, is relatively different to how new generations see war.  The link between memes and war is hard to define.  As this article illustrates, memes can be used in different ways whether that is a coping mechanism, dark comedy or simply a modern way of acknowledging what is happening around us.  Is it possible to accept this role of memes in warfare? Is it really a way for us to cope with the unpleasantness that war carries with it?