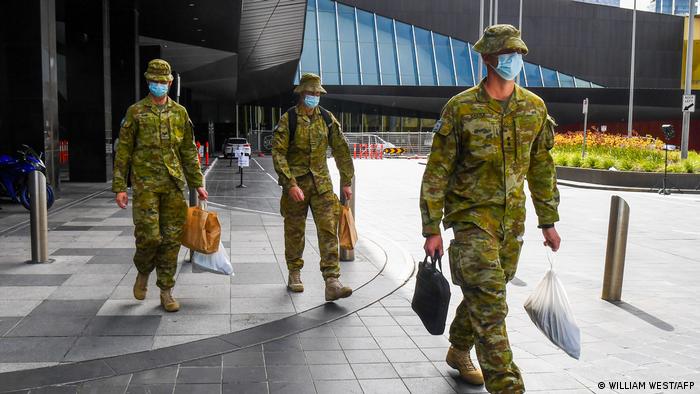 Struggling with the delta variant, Australia has deployed hundreds of military personnel to enforce a lockdown in Sydney. The delta variant outbreak has resulted in 3000 infections and nine deaths since it began in June. Before beginning their unarmed patrol from Monday, the defense force soldiers will undergo training over the weekend. The soldiers will assist police in ensuring that the rules are being followed in virus affected areas. New South Wales police have asked 300 soldiers for assistance. Over 200 personnel are already working at the airport and quarantine facilities in the New South Wales region.

The city of six million recorded its highest number of cases on Thursday since the pandemic began. State authorities think that the situation will only get worse further. The premier of NSW state, Gladys Berejiklian, declared that it was only logical to assume that things would get worse before getting better considering the number of infected people in the community.

The lockdown that is until 28th August prohibits people from leaving their homes except for shopping, caregiving, essential exercise and other reasonable purposes. Lockdown also restricts movement within 10 km (6.2 miles). Five weeks of lockdown have not deterred infection rates of the largest city in the country. "People are delaying testing despite noticing symptoms" stated the state health minister Brad Hazzard.

Due to no improvement, the lockdown was extended by a month last Thursday by Berejiklian. Restrictions must remain in place since very few people in Sydney are vaccinated as the country struggles against low supplies of Pfizer/BioNTech vaccine. Australia had planned to inoculate all under 60 with the Pfizer/BioNTech vaccine. The government has urged adults to take the AstraZeneca vaccine. However, some have cited rare blood clots and preferred to wait until additional Pfizer supplies arrive in Australia, which is not likely to be available for several months.

According to health officials, the cases are rising mainly due to permitted movement. David Elliott, the state police minister, thinks the step will help since a small minority of Sydney siders act as if they are above the rules. It will be similar to what happened in Melbourne last year, where military officials aided local police to ensure a swift response and ensured that appropriate protocols were followed. Mr Elliot also noted that the federal government had offered military help on July 7, but it was not considered essential until now.

The army will help police door-knock to ensure that people who have tested positive are isolated. Reassuring that the army personnel would not be carrying weapons and are highly disciplined, trained individuals aware of their tasks. However, many have raised questions and see military intervention as unnecessary. A civil rights group, The Australian Lawyers Alliance, called this "a concerning the use of the military in a democracy."

Critical workers and large families in Sydney’s ethnically diverse and poor west and south-west suburbs, home to about two million, have faced the worst during this outbreak. "These areas are targeted with even more restrictive policing measures," said critics. Recently the premier of the area Gladys Berejiklian affirmed that the area will face new curbs since it is the hotspot of infections. Residents in these areas would be forced to stay in a five km (three miles) radius, which is half compared to the rest of the city.

A local mayor from Cumberland, Steve Christou, said," Those people are among the poorest and feel marginalized, and targeted. They are unable to afford rent, mortgage, work and even food". The deployment of the army is going to make issues even more difficult for them, he added. Criticizing the government, he stated that the army was required weeks ago to assist with other measures such as vaccine delivery and rollouts, meals on wheels and other logistical tasks.

The NSW Aboriginal legal service has also voiced concerns. They accused the government of using the military and giving the police additional powers over-policed communities, such as those with high indigenous populations. The group’s chief executive Karly Warner said, "Indigenous groups are frequent targets, and this step only aggravates it. West and South West Sydney is home to a significant population of indigenous people. Many have encouraged the government to accelerate vaccination and provide communities with support services. Only 17% of Australia’s adult population is vaccinated, among the lowest of the 38 OECD members.

The lockdown on the country’s largest city is also affecting politics. It has mounted pressure on prime minister Scott Morrison who has faced a setback in opinion polls. Concerns that Australia’s two trillion Australian dollars ($1.5 trillion) economy could risk recession. The New South Wales area is the largest state economy and affects a third of the country’s economy.

Josh Frydenberg, the federal treasurer, said that he expects the economy to shrink till the quarter of September. However, whether the nation can avoid a technical recession would depend on whether the region can prevent a longer lockdown. As far as the December quarter is concerned, the effects are dependent on the success of New South Wale success with the virus.

An emergency meeting of state and federal leaders was held on Friday to discuss measures to tackle the pandemic. The group’s primary strategy is to increase inoculation. Australia has been handling covid-19 with great success, with a little over 34,000 cases and fewer than 1000 dead until recently. However, a slacking vaccination program and the outbreak of the highly transmissible delta variant has ruined that success.

Only 18% of people above 16 years have been fully vaccinated so far. Lawmakers fear that unless that percentage sees a significant upshoot, the country will be forced to rely on lockdowns to keep the virus under control. PM Scott Morrison said that he hopes for enough people to be vaccinated by year-end to enable doing away with lockdowns.

PM Modi: Free Vaccines to All above 18 at Government Facilities